1) Sprout is putting two words together all the time, and 3-5 occasionally, although generally speaking, these are still not descriptions, but rather orders to his troops, like so: "No Baba, no like dat!"

Or on another occasion, demanding seconds on soup: "Wan hoop. Many hoop!" 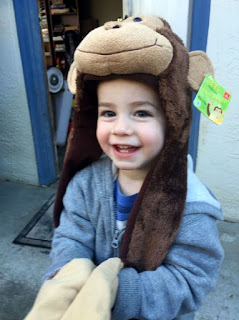 2) Also, when he couldn't get a toy to work, I witnessed the following: "Dammit!" Vigorous banging of the toy on the ground. "'Tupid!"

3) We went up to Tahoe for a weekend, and Sprouty got rather annoyed by the end of the drive. When we tried to cheer him up by talking up snow, he sat in his car seat and muttered, "No like it 'no." Over and over and over.  Then we got there, he played in the snow, and after we came in he had changed his mind. "Like it 'no!" 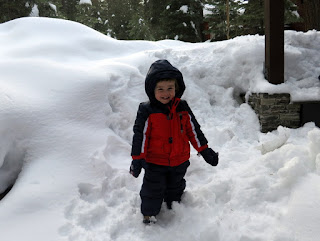 4) Sprout's pronunciation of fish is one of my favorites: fish = hiss. "Mmmm, hiss!"

5) The kid managed to bang my mom in the head with his giant noggin. I told him, "No hitting anybody." Later that night, he was in the bathtub and my mom came into the room. Sprout promptly proved that his command of cause and effect was a little bit...off. "NO BABA, no hittin' anybody!" 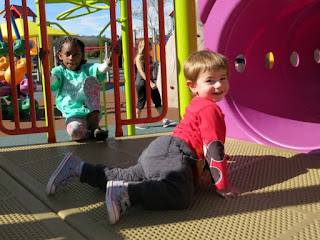 6) Fuzzy was invited to a bowling birthday party for one of his preschool friends, and Sprout tagged along. He was super into it, and carried the heavy ball around unassisted. This is fairly impressive, considering the 6 pound ball is a quarter of Sprout's body weight. All the other parents were very impressed, and kept telling I had a bowling prodigy. I am dubious - a lifting heavy objects prodigy, maybe. 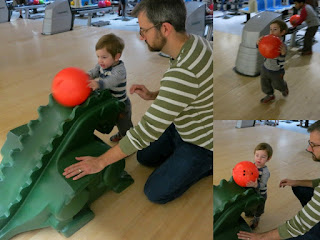 7) For some reason, Sprout's way of talking always carries the hint of a threat. For example, the boys were playing superheroes and requesting that I yell for their help. I did, and had them locate various 'lost' items - my phone, chapstick, etc. Each time, they would ceremoniously hand me the item, and Fuzzy would say, "Okay Mama, if you need help, yell for us!"

Then Sprout would come up, poke me in the leg with his finger and hiss, "Yelllll fo' ussssssss!"

Whereas Fuzzy's was clearly an offer of help, Sprouts hoarse hissing felt like a mafia Don explaining to a business owner exactly how things work. 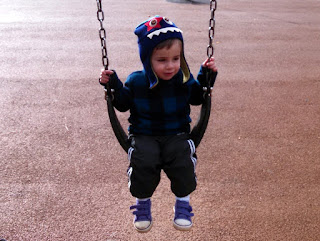