1)  This month did not start out well.  Just two days after Fuzzy turned 14 months, he ran full tilt into the side of the bathtub, resulting in a severely bit lip.   Then, two weeks later, while we were visiting my parents' house in California, I took my eyes off him for a few crucial seconds, and he fell all the way down the stairs.  Fortunately, there wasn't any damage from that fall, but I've never been so scared as when I ran down those stairs to scoop him up.

2)  In happier news, we were visiting California to attend my sister's wedding, in which Fuzzy had a short but starring role.  He did not have a job to do, per se, but was expected to walk down the aisle with two other very small people, all wearing adorable tiny suits. 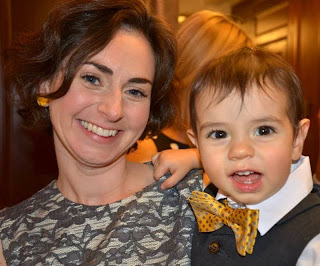 The other little boys in the wedding were a year or two older than him, and when Fuzzy saw them for the first time, he ran over and immediately tried to hug them.  The older boy was quite receptive, but the younger one got scared, and tried to get away from this aggressively friendly baby.  Fuzz saw his running as a challenge, and proceeded to chase him all over the place to get his hug.  Eventually the other kid acquiesced due to sheer tiredness - it was like watching endurance hunting in action.  Now whenever Fuzzy sees another small person near him at a social function, his first reaction is to run over and hug them, whether they are interested in said hug or not.

3)  The California trip brought other joys as well - Fuzzy met and then immediately tried to feed some real-life cows.  They were not quite as picturesque or as tame as I envisioned them, and once I saw the dairy farm, I expected Fuzz to be a little scared of these giant, dirty creatures and their accompanying mass of flies.  However, my expectations were completely upended when it turned out the cows were actually scared of Fuzzy - I guess they aren't used to small human creatures running at them excitedly waving hay.  In order to get the shot below, The Pit's cousin actually had to lock them in the place so they couldn't shy away.  Once they were forced to confront Fuzzy, they eventually allowed themselves to being fed, so I guess all's well that ends well. 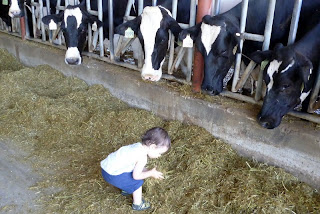 4)  In other hugging developments, Fuzz has also invented a game he seems to play solely with me.  I'm not entirely sure what the point of it is, except he likes to run up to me, pry my legs apart, squish himself through, and then tackle me in a giant hug from behind.  This is all accompanied by shrieks of pure joy, especially if I manage to reach behind and awkwardly hug him back.

5)  Fuzzy has always liked music, and in the past has made movements - well, if one were incredibly generous, and also maybe blind, one could call them attempts at dancing.  However, this month he really upped the ante and made very clear dancing moves, consisting primarily of tapping his feet really really fast when music starts to play.   He also loves it when one of us picks him, holds his arm out in a formal dancing position, and swings him round and round the living room. 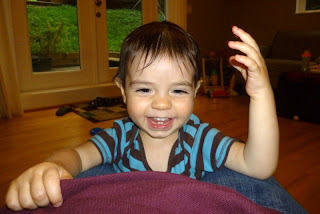 6)  In addition to his new-found dancing skillz, for the first time this month, Fuzz started trying to climb on things.  It doesn't really matter what the thing in question is - the back of the couch, the bathtub, mom's legs - he grabs on tight and starts swinging his little leg up, grunting with effort and occasionally farting.  I found out the hard way about his new abilities when I left him alone for a second while running the bath.  He had been cheerfully throwing his bath toys in the water when I went out, and when I came back with his towel less than 20 seconds later, he was sitting fully-clothed in the tub, grinning up at me happily.

7)  There's been some cognitive development as well - Fuzzy is getting better and better at reasoning, generalizing, and extrapolating.  For example, the other day we found a single detached cicada wing laying on the sidewalk.  Fuzz picked it up, fascinated, and I told him it was a wing.  He immediately started waving it around in a flying motion, making a zzzz noise. 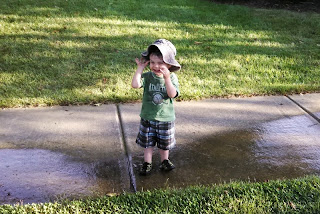 8)  This month also brought another milestone - recognizing his new big boy status, Fuzzy started refusing all baby food.  This has made life a little harder, because although we hadn't been giving him jars for every meal, they were a nice convenient option at least once a day.  Now Maya and I have to plan ahead and have real food for him three times a day.