Because Fuzzy's arrival came via c-section, I have a hard time with some positions, including bending over and sitting up.  Consequently, The Pit has taken on the majority of diaper changing duties since Peach Fuzz was born.  Considering that prior to the blessed event, The Pit had never changed a diaper, I think he's doing splendidly.   However, there is one aspect to having a boy that he clearly did not anticipate.  I refer, of course, to the...err...golden showers.

It first happened in the hospital room, when The Pit was changing an exceptionally dirty diaper.  Fuzzy was being rather uncooperative, and in all his thrashing around, poop was getting everywhere - the Pit, Fuzzy's feet, Fuzzy's shirt, the bassinet, the extra blankets, etc.  I actually pulled myself out of bed to help out, because the situation looked to be deteriorating rapidly.  Just as I got there, Fuzz decided his parents needed an additional challenge, and launched a stream of urine in a high arch toward the two of us.  Well, c-section stitches or no, we both managed to dodge out of the way, laughing hysterically.

The Pit, as it turned out, would not be laughing for very much longer.  Over the next few days, Fuzzy managed to hit him once during a diaper change, and several times while sitting innocently on The Pit's lap, as the pee overwhelmed his diaper and soaked through The Pit's shorts.  The Pit got to be quite bitter about this state of affairs, once going so far as to remark that life did not seem fair, as I had remained both urine and feces free for almost a week.

Of course, shortly after telling me this, The Pit found an urgent reason to make a trip to Home Depot, leaving me to manage both feeding and changing on my own.  This situation very quickly changed from this idealic scene: 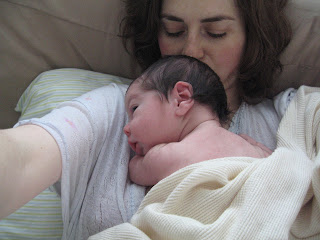 Fuzzy heard the call of nature, and I put him down on the changing table.  Naturally, I forgot to cover a certain critical anatomy fast enough, and once again witnessed a high yellow stream heading my way.  This time I was not so quick, and both myself and the floor got a good soaking.  However, as we were about to learn, changing your shorts and cleaning the floor is not really the worst thing that can happen in this situation.

The next time Fuzzy attempted this trick, he was...err, how to put this delicately...pointing in a different direction, and managed to nail himself right in the face.  There was a moment of stunned silence, followed by hysterical wailing from the baby, and rather uncharitable laughter from The Pit and I.  I'm sure he'll get us back eventually, but in the meantime, diaper changes have been pretty quiet around here.
Posted by Peachy at 6:43 PM 3 comments:

Well, its been almost two years, and I think it might be high time to resurrect ye olde blog, as The Pit and I are moving into a phase of our lives guaranteed to be rife with bloggable moments for the amusement of my audience of dozen. 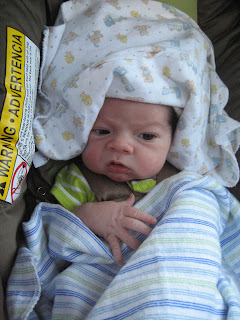