It's a good thing I took copious notes of the child's activities in the first half of this month, because the second half was all a sleepless blur.  For some inexplicable reason the baby just stopped sleeping through the night one day, and then, just as inexplicably, went back to normal a few days ago.  Let us all hold our breath and pray this continues, because mama can't take any more sleepless nights.  Okay, onwards to milestones: 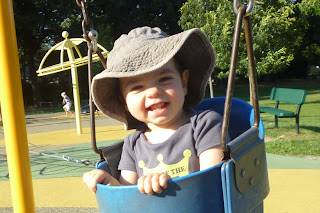 1)  New words in our vocabulary: "cacker," which is cracker, "bubba," which is bubbles, and "gaga," which is paka and the Russian word for bye-bye.  If we count all the random noises Fuzzy uses to communicate as words, I believe this brings us to a total vocabulary of twelve whole "words:"  mama, dada, nana = banana, ado = avocado, haaa = hot, ayyy = eye, da = duck, zzzz = insect, and brrrr = car (or anything mechanical that moves - boats, wagons, etc).

2)  One of Fuzzy's favorite activities this month was picking up a toy cell phone, holding it up to his ear, and then self-importantly marching in circles while he babbled into it.  After seeing him do this a few times, The Pit decided we should probably cut back on cell phone talking in front of the baby.  The image he was reflecting back at us was not exactly flattering. 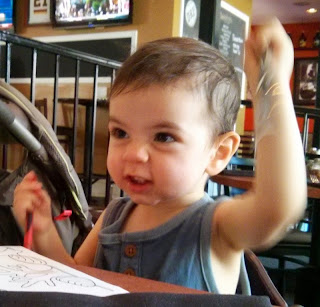 3)  In addition to his verbal skills, Fuzzy has a few signs that he uses, most of which I've chronicled before.  One that I don't think I've talked about is his "boom" sign.  This involves Fuzzy hitting himself on the head, as in, "I just fell down and my head went boom."  He makes this sign both to indicate that he's hurt himself, and to let us know that a loud noise is happening.  The most comical use of this sign was on the 4th of July.  We decided to show him a video of fireworks to prepare him for what he would see that evening - and like an idiot, as he was watching it, I said "The fireworks go boom, but aren't they pretty?"  Fuzz stared at the video with wide eyes for a few seconds, looked at us gathered around him, and then started hitting himself in the head with great concern.  All attempts to explain to him that his head was in no danger were met with even more frantic gesticulating.  Fortunately, when we went to see the actual fireworks, they were far enough away that the noise wasn't scary to him, and he watched the show quite calmly. 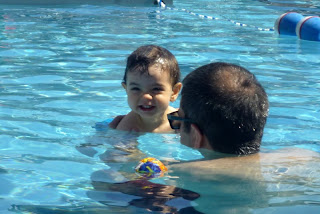 4)  Around the same time as the fireworks issue, Fuzz started to pay attention to airplanes flying overhead.  And once he noticed them, they terrified him.  He would point to the plane, grab onto my leg, indicate that he wanted to be held, and when situated in the safety of my arms, repeatedly make the boom sign.  I thought I could fix the issue by showing him a toy plane we had at home, that he had played with for months and months.  After a walk where he got particularly scared of a low-flying jet, I showed him the toy, and explained that this was an airplane, and nothing to be scared of.  Fuzzy stared at me, stared at the toy in his hand, and then tentatively waved it around above his head in a questioning way.  When I confirmed that this was indeed what planes did, he dropped the toy like it was suddenly hot, made the boom sign again, and started to cry.  For the next two weeks, he would grow very concerned whenever he heard a plane fly overhead - and there are, as it turns out, a whole lot of planes flying over us every day.

5)  Although the previous paragraph doesn't support this assertion, this month Fuzzy did get quite a bit more independent.  He now wanders away by himself and flips through his favorite books without involving nearby adults, he tries to feed himself with a spoon, and just recently I witnessed Maya asking him to help when she was putting on his pants.  He gamely grabbed at the cloth around his ankles and pulled up. 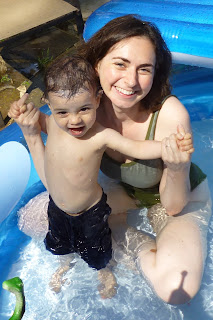 6)  Fuzz has also been imitating adults to the best of his ability - he saw my sister snap her fingers when she was visiting, and he's been trying to do it ever since.  He also watches intently when Maya makes tortillas, and then points at her and uses the exact same hand gestures, flipping invisible dough back and forth between his hands.

7)  I'm not sure if I've ever mentioned it, but Maya does presentations regarding traditional Mayan cooking, weaving, and childrearing at museums and various cultural festivals.  For the latter demonstration, she has a lifelike yet incredibly creepy baby girl doll.  One day she came in after doing a presentation, and Fuzzy saw the doll.  He immediately grabbed it, hugged it, and then started dragging it back and forth across the living room by the hair.  Observing this behavior, Maya exclaimed "He needs a little sister!" 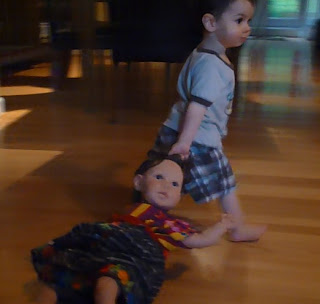 8)  We've been trying to introduce Fuzzy to the whole potty-training concept.  I got a potty several months ago, and it's been sitting in his room, where we will periodically point to it and explain the basics - "You go pssss and 'ah ah ah' in there."  Fuzzy dutifully pointed to it and made the appropriate noises, but did not show much indication of ever wanting to sit down.  When my sister was visiting, she and her fiance brought Fuzzy a potty-training book, which covers the travails of a baby who wants to use the potty.  At the end of the book, there is a picture showing him going on the potty, followed by applause from his family.  Fuzzy grasped the concept right away - he now comes into his room, sees the potty, sits down on it fully clothed for approximately two seconds, then applauds himself with great vigor, stands up, and goes on his way.  I'm not quite sure where to go from here.

9)  Fuzz has always liked music, but this month he developed a new habit - when he hears it, he will clap his hands with joy.  This applies to CDs we play, music he hears from the TV, and music from some of his many toys.  The best though, is when he hears a blast of music from a passing car - whether it be country, rock, or some hard-hitting rap, the baby pauses, cocks his head, then applauds for a few seconds before waving bye-bye.
Posted by Peachy at 9:05 PM No comments: