1) Lots of new words this month, but I think I have most of them listed here:
coo coo = hiding (the equivalent of peek-a-boo in Russian)
appa = apple (no longer buh buh!)
plumpbpb = plum
hooom = home
noon = moon
indy = window or windy, depending on context
issss = ice
gump = jump
dunce = dance
bebe = baby
don = down or done, depending on context
unda = under
in = in
up = up 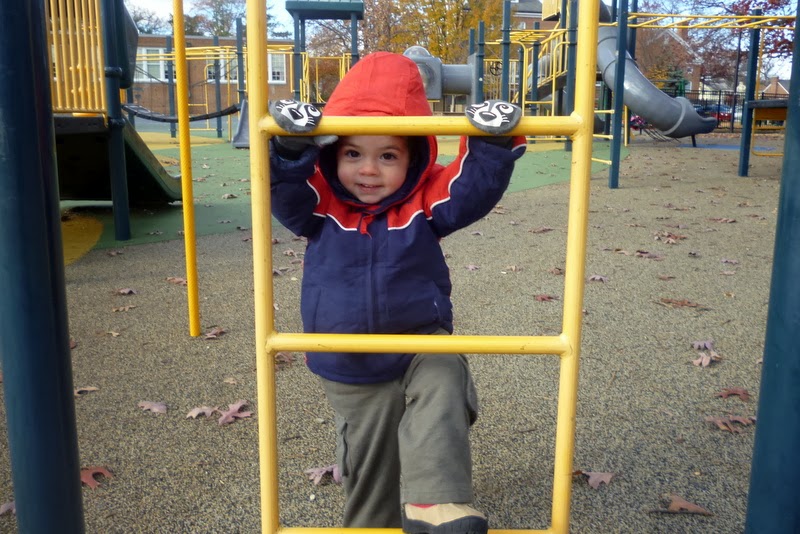 2)  Fuzzy got the head shake for "no" down pat a long time ago, but previously had no equivalent affirmative gesture, despite The Pit's persistent attempts to teach him to nod.  When asking him a series of questions, we thus had to watch him like hawks until he stopped shaking his head, indicating that he did indeed want whatever item was being offered - either that, or he had stopped paying attention entirely.  This led to a lot of prematurely peeled bananas.  This month he finally got nodding down.  Except it isn't nodding exactly, it's one very emphatic nod.  That is all you get, and woe to you if you happen to miss it.

3)  Unlike last year, when we managed to put him into his costume no problem and then photograph extensively, this year Fuzzy chose not to cooperate on Halloween.  He acquiesced to the body portion of his lobster costume, but the head piece was a step too far.  He was, however, perfectly happy to laugh at me when I put his lobster head on in a futile attempt to convince him that this was a good idea. 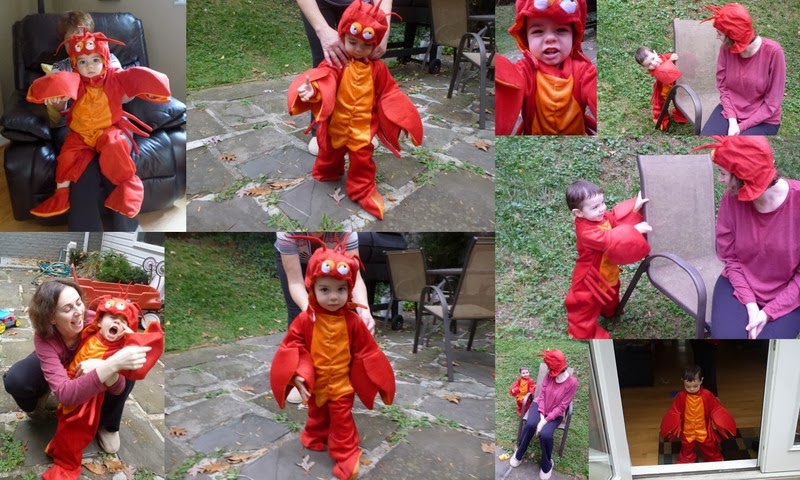 4)  Last month Fuzzy conquered the up portion of stairs, and this month he learned the complementary down portion, at least when there's an appropriate handrail.  He grabs on and just - steps down.  Most of the time he doesn't even fall after.

5)  Fuzzy has a new love in his life - it is the moon, which he persistently refers to as the "noon."  He asks after the noon all day, and when it finally comes out in the evening and we can show it to him, he yells its name over and over again in excitment.  If we go for a twilight walk, he likes to always have it in sight, and gets upset if the noon is momentarily hidden by trees or clouds.  At this point, he wails "NOOOOOOOON???" in a heartbreaking and very loud voice. 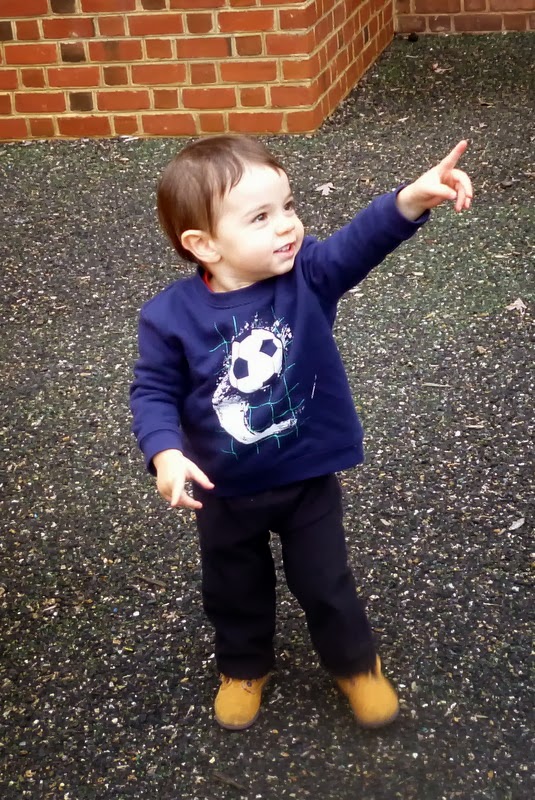 6)  While not loved quite as much as the noon, he has also taken much more of an interest in his stuffed animals recently, and in particular to a little toy dog that his great-grandmother gave him months ago.  When switched on, this beast walks in circles and alternates very annoying barking with very annoying whining noises.  When we first got it about 6 or 8 months ago, Fuzzy was actually quite scared of it, and thus it has been relegated to the back of the toy bin.  The other day Fuzz pulled it out, indicated that he wanted it on, and then rapturously followed it around the room, smacking it's back (where the walking button lives) every time the thing paused.  I am not nearly as in love with this thing as he is, but it is quite adorable to watch him hug it to his chest.

7)  Fuzzy has always liked dancing, and in particular dancing with mama.  As previously described, this involves me setting him on my hip, grabbing one of his hands in a ballroom pose, and spinning across the room.  Sadly, between mama's growing belly and Fuzzy's ever increasing weight, it's getting harder and harder for mama to keep this up.  Being a baby, Fuzz does not care for my excuses, and this month he really increased his demands - not only did he want constant music and dancing during the day, but when I was rocking him back to sleep after a nightmare, he turned to me with his eyes closed, clearly talking in his sleep. "Dunce," he commanded, "Mama, dunce." 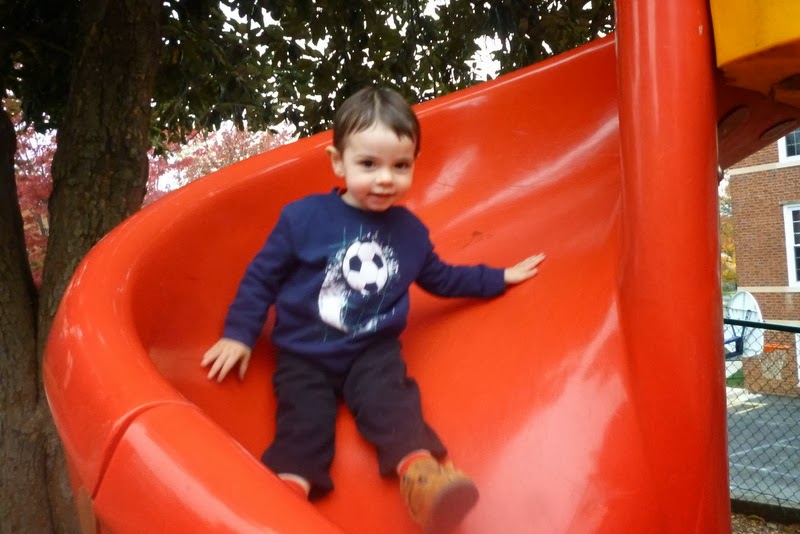 8)  After figuring out how to say the word "under," Fuzz has been obsessed with a new game.  He demands that mama and daddy both get down on all fours, crouch next to each other, and thus form a human fort.  Then he crawls under us yelling "UNDA!!" repeatedly.   When he gets bored with this, he wants to play "coo coo" - this involves us throwing a blanket over him, and saying "Where's Fuzzy?" over and over again until he manages to get his head clear.  Then he yells "Coo Coo!"and we have to say "Oh! There he is!".

9)  Fuzzy really likes the concept of jumping.  He makes his toy grasshopper jump in the bath, and accentuates this with his new word: "gump!"  Apparently the grasshopper really likes to gump on mama's head for some reason.   Fuzz has also been experimenting with gumping himself.  He stands up straight, then bends his legs, throws his arms back, and says "Gump!" excitedly.  Unfortunately, there's a key component missing - he never actually lifts off the ground.  His form is perfect, but he just straightens up after the leg bending and applauds himself without ever achieving any air whatsoever.  Maybe next month... 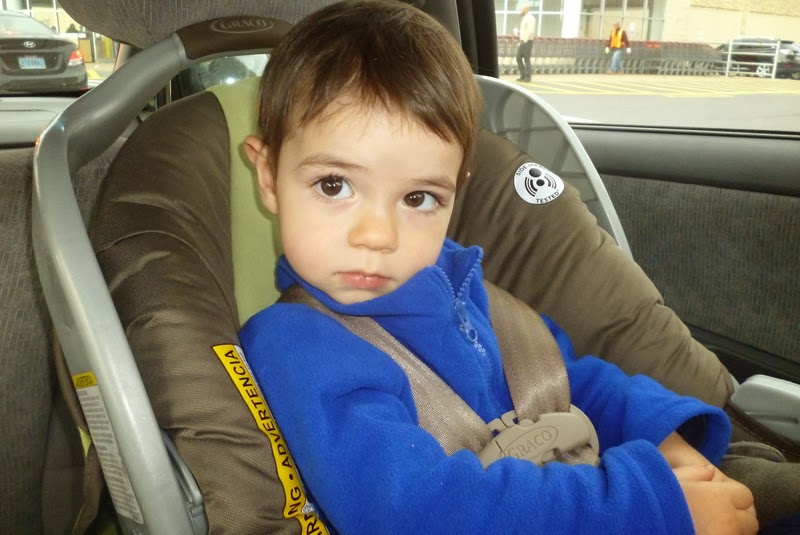 Posted by Peachy at 3:07 PM No comments: