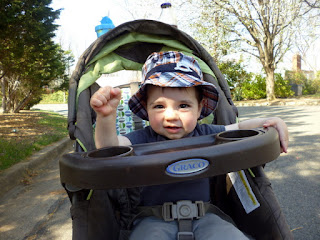 1)  Right after I wrote my last post for Fuzzy's 10 month birthday, he figured out pointing.  And once he figured it out, he did it all the time.  Which only makes sense - if pointing was the only way I had of communicating, I suppose I would point nonstop too.  So now as we move through the house, the baby constantly points at things he wants to touch and/or eat.  In practice, he mostly wants to touch things with buttons - the phone, the light switches, and the controllers for our ceiling fans.   Everything else, he wants to eat.  As he points, he also deploys his one word/question, "ade?", which can apparently mean anything from "look at that bus" to "I demand to grab this filthy sponge and suck on it." 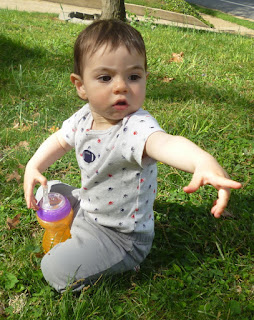 2)  When I bathe Fuzzy, I sit right on the floor by the tub, and spend some time playing with him.   During this time, he will often stand up and start grabbing my shirt or my hair, so to minimize the hair-pulling, I started putting my hair back with clips.  Well, one day the baby fixated on said clips.  From his excitement, you would think I had gold hidden in there - he grabbed the clips, pulled them out, hooted, shoved them in his mouth, and then took them out and attempted to affix them to my hair again.  Then we repeated the cycle about five times.

3)  Fuzzy also began trying to wash himself.  And when I say himself, I mean his...err, undercarriage.  He will pull himself to a standing position on edge of the tub, bend over, and then start splashing water on his junk - you know, just washing up the important bits, all nonchalant-like.

4)  He is incredibly sweet when I come home.  He sees me, starts grinning and pointing, then crawls over and pulls on my pants to be picked up.  When I hold him, he throws his little arms around my shoulders, nuzzles his face in my neck, and hugs me.  It's really the best part of the day.

5)  However, I am not the only object of his affection.  His grandmother got him an enormous teddy bear for Easter.  And when I say enormous, I mean approximately my height, and at least double my width.  We all wondered what his reaction would be when it came out of the box, but I don't think anyone quite anticipated how much he would love this thing.  He immediately hurled himself at the bear, hugged as much of it as possible, and started to give it kisses.  In the following days, he also began taking more of an interest in his other, regular-sized stuffed animals, nuzzling them to his cheeks and occasionally bestowing kisses. 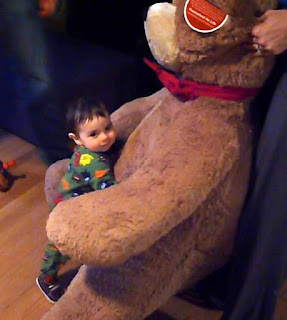 6) About halfway through the month, he was comfortable cruising from one piece of furniture to another.  When we could distract him sufficiently, he could also stand up unsupported - however, as soon as he noticed he wasn't actually holding on to somebody or something, he would lose his balance and plop back to the ground.  Then, one day while Skying with my mom and grandparents, Fuzz was standing up, leaning against his walker, and holding a toy in each plump little fist.  I scooted two feet away and asked for one of his toys, and in his confusion about which toy to hand me, he actually took three unassisted steps in my direction.  The cheering he received over the computer completely mystified him. 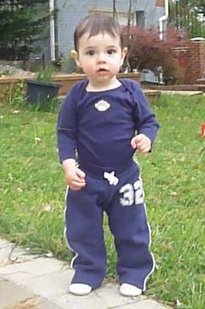 7) Right on his 11 month birthday, something clicked and our boy figured out clapping.  Now when he's very happy or pleased with himself, he gives a round of applause.  This is especially cute when it is combined with his pointing.   Sometimes he'll point, and I'm not sure of what he wants, so I pick up objects one by one and offer them to him.  When I get to the correct thing, he starts applauding with joy. 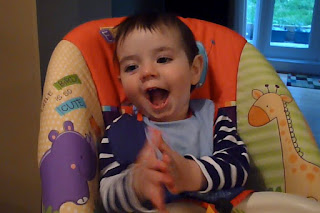