Fuzzy's 13th month of life brought a little bit of trauma - The Pitt and I left for a one-week vacation in Paris, requiring weaning and a week without mama and dada to cling to.  Undaunted, the baby appropriated a small toy elephant as a replacement, dragging it everywhere with him until we returned. 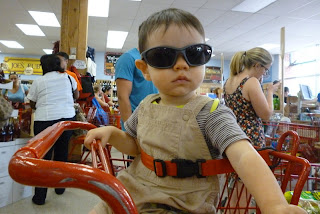 My mother flew here to babysit him while we were gone, and upon her arrival, he solemnly led her around the entire living room, showing her all his toys and books.  He also pointed to various items of electronics - the TV, the phone, etc., and then shook his head vehemently to indicate that those where no, no, no and off-limits.  Although he doesn't always follow his own advice: it is very humorous to watch him shake his head no, then pause, consider, and reach for the item anyway.

A few days before we left for our trip, Fuzz started saying "mama," but not in a clear-cut sort of way.  From him, it was a deeply guttural "mhhaaaaaa mhhhaaaaa" sound.  Sort of an Igor noise, if you will.  However, by the time we returned, he had sorted the new sounds out, and greeted me with a very refined "mama," along with a huge smile and opened arms.  Hugging him was the best after a week away. 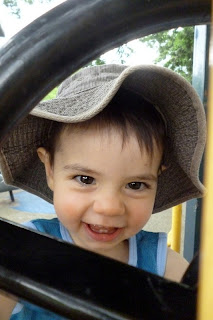 Another sound Fuzzy learned this month has to do with his new favorite friends, the bees.  Early in the month, at my mother's encouragement, we started walking with Fuzz along the sidewalks near the house, and he was fascinated by the bees.  When I explained that they say "bzzz bzzz," he joyfully yelled "zzzzzzz!!!" and has been saying the sound every time we approach flowers.

He's also figured out that zzzz generalizes to pretty much any insect - a fly is a zzzz, a mosquito is a zzzz, and best of all, a firefly is a zzzz.  When he first saw the fireflies lighting up, I explained to him that they were zzzzs.  Fuzz turned to me with a very dubious expression, and said "zzzz??"  Like, "really, mama, that doesn't seem likely."  But then one flew close enough for him to see that it was in fact a bug, and he got very excited.  Now watching the fireflies is the last thing we do before he goes to bed, and actually the only thing that will induce him to come out of his bath.

In addition to buzzing noises, Fuzzy has expanded his repertoire of gestures.  Prior to this month, he could make the signs for "more," "milk," "water," "eat," and "sleep."  These were specifically signs I taught him - but as these exhausted my knowledge of sign language, Fuzzy has started to make up his own gestures, mostly from watching adults around him.  When he hears a noise and wants the rest of us to pay attention, he holds his pointer finger up, and when he's confused about the location of something, he spreads both hands out, palms up.  The meaning of these gestures couldn't be more clear if he was an older Italian gentleman. 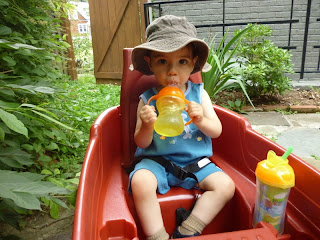 Additionally, when he sees a hat or sunglasses perched on somebody's head, he taps his own head to show them that they have something up there.  This also goes for pictures in books - my mother was very confused one day when she was reading a story to the baby, and he kept hitting himself in the head.  Turns out, he was explaining to her that the main character was wearing a hat.  His other favorite book page has been the one featuring tooth brushing - when we read that one, Fuzzy will poke a finger into his own mouth to show us that he knows how to brush his teeth.  He is so intent on this picture that nothing else interests him - any attempt to turn the page further will be met with an indignant wail, and more urgent finger in mouth movements.

In other communication news, Fuzzy will now poke at eyes, grab ears, and pull on hair when asked to show each body part.  Particularly funny is when we ask him where his ears are, and he grabs one in each hand and pulls up.  And here I thought he couldn't get pointier elf ears if he tried.  Turns out, he's trying. 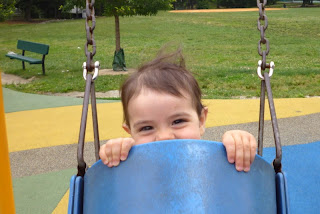 My final bit of development news is related to locomotion: Fuzzy's walking has really improved, and he can toddle along for multiple blocks at time when he's in the mood.  Unfortunately, I would say he's actually falling more than ever these days, as his improved mobility has given him a bit of overconfidence in his own stability.  He's constantly running and tripping over stuff, and has more or less permanent skinned knees as a result.  Fortunately, he's a tough baby, and cries for at most a minute when a fall happens.  I've actually watched him completely ignore a bloody knee as he intently followed a bumble bee from flower to flower, happily zzzzzzing to the bee the whole way. 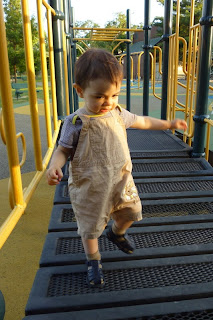