1.  Potty training progressed well this month - when nobody is paying attention, Fuzzy now moves his potty to the middle of the room, pulls down his pants/underwear, does his business, and then stands up and starts tugging his clothes on again.  At this step he usually runs into trouble and starts calling for us, at which point we also decide if wiping is necessary. 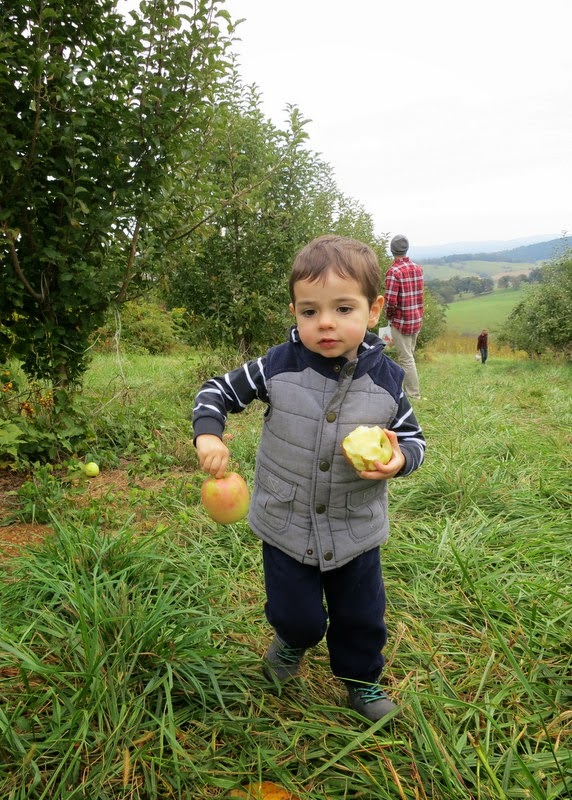 2.  In another independent move, the kid has figured out how to open his bedroom door.  I was sitting at the dining room table working on the laptop during one of his naps, and glanced up to see him standing next to me quietly, clutching Dot Baby and watching me with wide eyes. 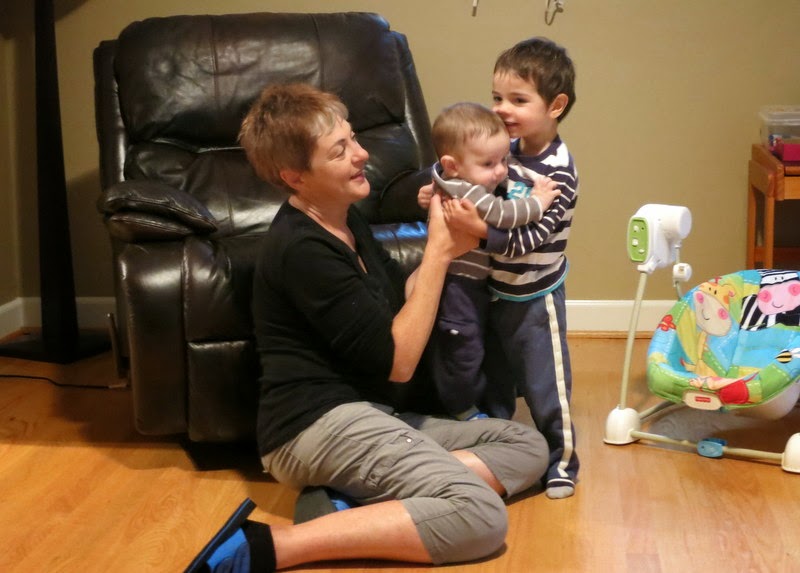 3.  We were invited to a birthday party for one of Fuzzy's classmates, and Fuzzy could not have been more excited.  All the way to the party, this is what I heard from the backseat: "Maybe Max will have cake?  Let's go see!  Maybe it will be chocolate cake?  I like chocolate cake!"

Then, when we arrived, Fuzzy glanced with disinterest at the pile of presents, turned to me, and said, "Where is da cake?"  When I told him that we had to wait, he said, "Okay, I have to be patient!"  I breathed a sigh of relief, thinking that the interrogation was over.  However, apparently Fuzzy and I have very different definitions of the word 'patient.'  Based on the evidence, Fuzzy thinks waiting for less than a minute qualifies, because after 30 seconds, he turned to me and the whole "Where is da cake?  Is it chocolate cake?" line of questioning was repeated.  Fortunately, we discovered a trampoline in the birthday boy's backyard, and cake was shortly thereafter forgotten.

However, the party clearly made a lasting impressing.  Weeks later, whenever we get in the car, he asks if we are going to Max's birthday party again.  Thus far, explanations of 'only once a year' have made no noticeable impact. 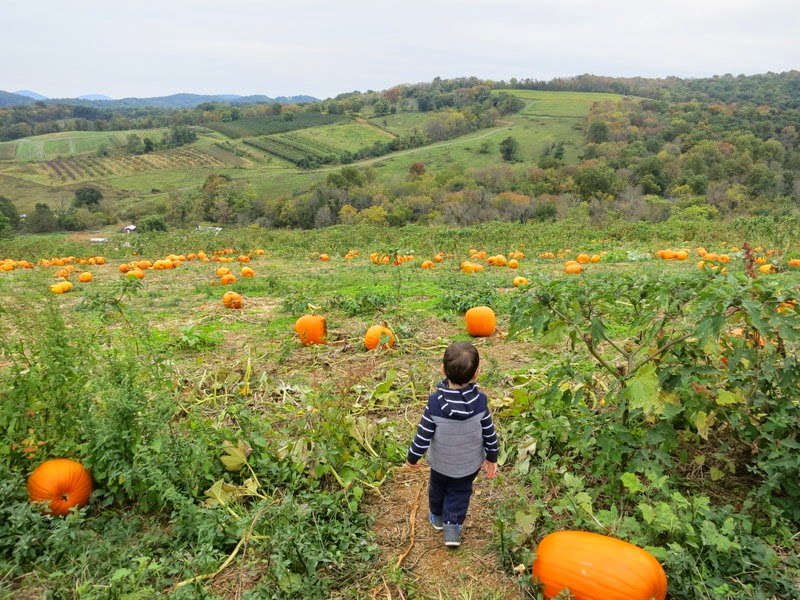 4.  In other news, despite the excellent birthday party, Fuzzy suddenly hates preschool, and insists he has no friends there.  His attempts to get out of going to school are pretty inventive and hilarious however.  He began our conversation thusly:
"I don't want to go to pweeschool, I want to to go play at the park wit Maya."  When that didn't work, he turned on the tears, and through his sobs, wailed:
"I want to sleep! In my crib! Not later, now!"  When that didn't work, he tried a different tactic:
"Mama," He said, "You tired.  You take off that firt and put on you nightgown and go sleep in you bed....and me too!"

5.  After nightly struggles for several weeks, Fuzzy relented and allowed me to brush his teeth without any issues.  I tried positive reinforcement: "You made Mama so happy! Thank you baby!"  He glanced up at me, and primly said, "You vewe welcome." 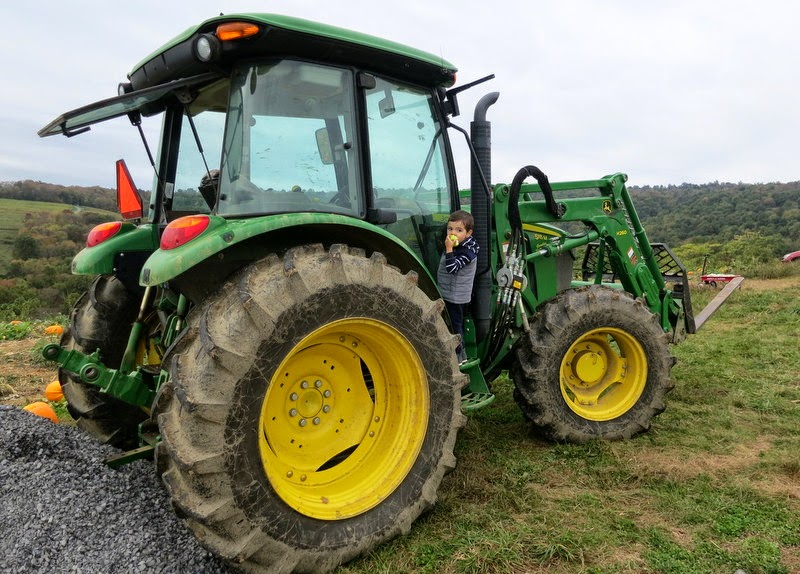 6.  Maya collected a box of acorns for Fuzzy to play with outside.  When we poured out the acorns, we discovered a couple of little grubs in the bottom of the box.  Fuzzy put one of the grubs in an acorn top, and held it up, admiring his work.  "He vewe happy in his new hoooome!"

7.  Fuzzy was sitting in the tub one night, and in between playing with his bath toys, glanced up at me, and said:
"Mama, yous eyes are red!"  I explained it was probably because I was tired.
"Oh, I will be a doctah and fix them!"
"How are you going to do that?"
"I will poke dem...it will be a...SURPRISE!" 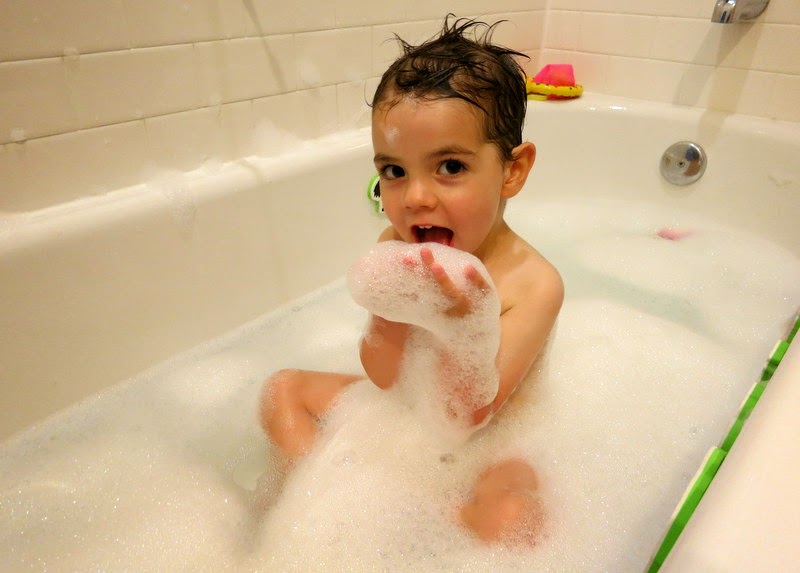 I declined his kind offer, but really, all things considered, it would have been surprising indeed.
Posted by Peachy at 4:48 PM No comments:

1)  Sprout has a new fun idiosyncrasy this month - as we hold or rock him in the few minutes before he falls asleep, he starts making this strange moaning noise.  It sounds pretty terrible, but I don't think it's a sign of distress - my mom described as singing himself to sleep, which it may be.  If that's the case though, it's the worst singing I've heard. 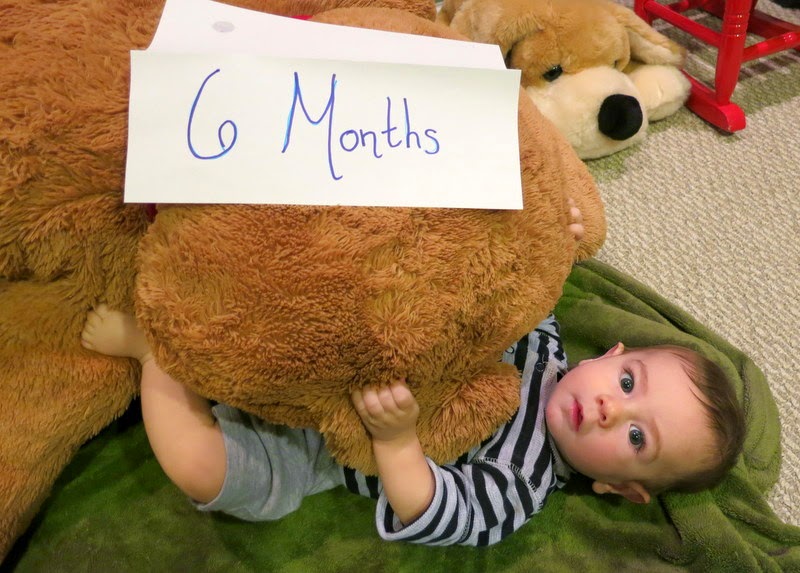 2)  Whenever the baby is done eating now, he will not just turn his face away, but without any warning, try to escape with his whole body.  Since usually he is precariously balanced on a nursing pillow at the time, his sudden twisting and lunging is a little disconcerting, as I have to be ready to catch him before he hits the floor.

3)  Another fun game Sprout has invented involves him grabbing his hands together, and then shaking them back and forth in front of his face...this is all very fun for a minute or two, and then he gets overly enthusiastic and wallops himself in the nose.  Then he is less amused. 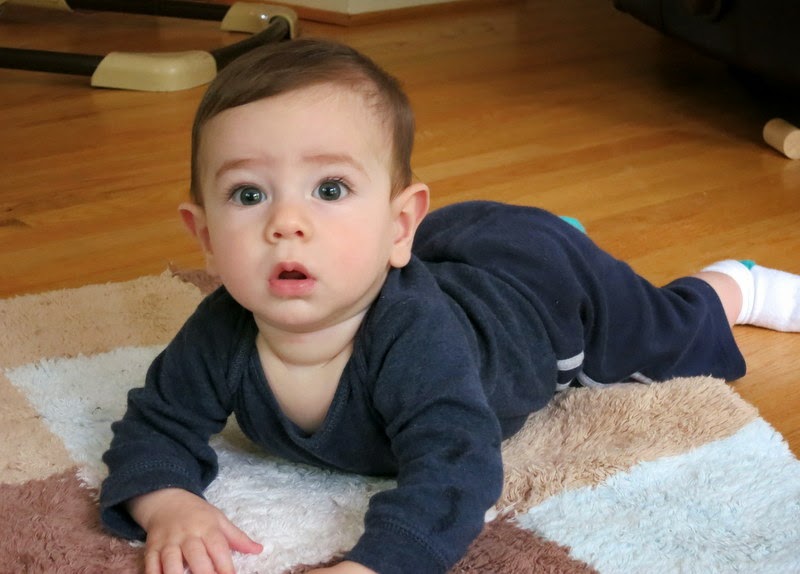 4)  Motor development has been interesting this month - he started off the month sort of sitting upright if he was placed in that position by an adult.  Once left to his own devices though, he would eventually tilt to the side and fall over.

Undeterred by his lack of mastery of this basic skill, Sprout nonetheless decided he was ready for more advanced action - he started trying to crawl.  Trying was the operative word though, as he didn't initially have much success.  He would lay on the floor with his face down, and lift up his butt like he was doing the butterfly swim...and then stop, utterly confused about the next step.  By the end of the month, he got to the point where he could lift up his body on his hands and knees, but this was quickly followed by a fall on his face.

Next month though, I think we'll see some fairly rapid progress on the movement front, as this child *really* doesn't like to sit still. 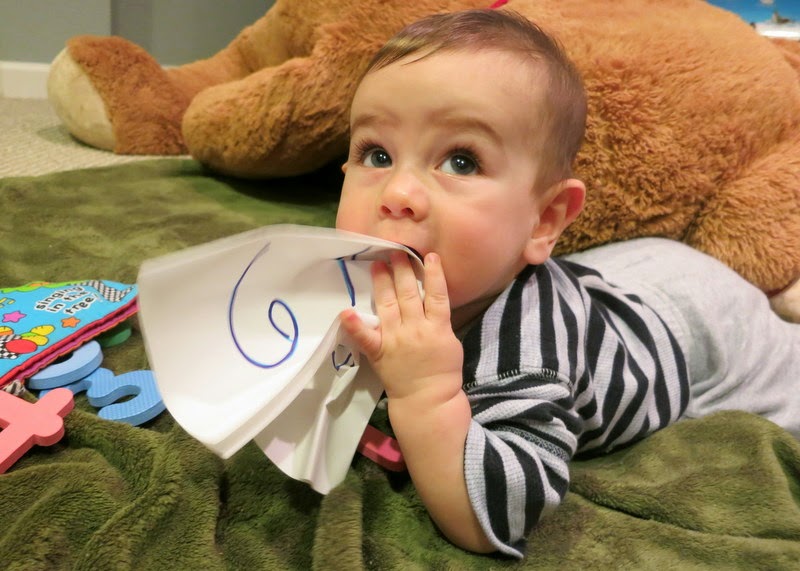 Posted by Peachy at 3:27 PM No comments: