1)  Fuzzy has been pretty hilarious this month when it comes to responsibility.  When he wanted to hold Sprout, this was the reasoning: "Can I hold him?  I a big kid!"  And on another occasion: "Mama, can I have my garbage truck?  I pwomise I will be vewe wesponsible wit' it!" 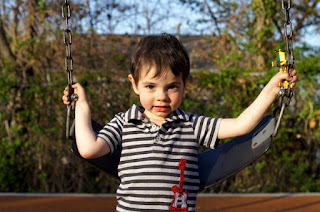 2)  He has also been totally random.  For example, we have these bath markers that draw on the bathtub wall.  Usually he wants me to draw a digger, but one time this month, he demanded that I draw Peppa Pig.  "I can't," I said. "I don't really know how to draw a pig, much less Peppa."  "Just twy!"  So I did.  I drew...something.  It might have been vaguely pig-shaped.  Fuzzy was not pleased.  "I don't like dat face.  Dat face belongs to a tiger dat lives in Afeeeka." 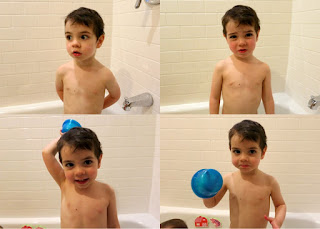 3)  I was eavesdropping as The Pit was reading to Fuzz.  Describing something in a book, The Pit explained, "They are British.  I am American.  Are you American too?"  Fuzzy responded in the negative, "No, I'm not." "What are you then," The Pit asked, and got back the best answer ever:   "Difficult." 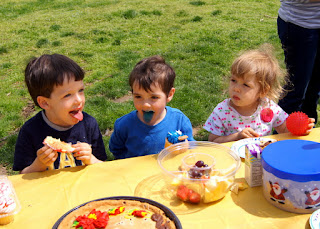 4)  I was in the shower one morning, sick and coughing.  Fuzzy came in very concerned: "Mama, are you going to fow up?  I will make you feel better!"  He disappeared, and came back carrying the mug of water I had left by the bed.  "Here Mama, dwink some water.  Dwink all the water 'till you feel all the way better."  After I assured him that the water was helping, he left again, only to come back with a tissue to wipe my nose.  This was accepted with profuse thanks, although I was dubious as to its usefulness in the shower. 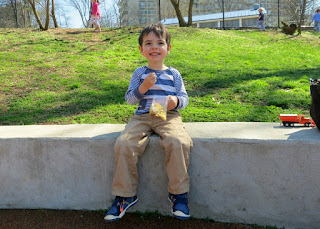 5)  In another sickness-related incident, Fuzzy found The Pit's beard trimmer charger.  Not knowing what it was, he plowed ahead anyway.  "Mama, bend down so I can take you temperature!"  I obliged, and he stuck the charger vaguely under my arm.  I asked him what it said, and, with full confidence, Fuzzy pronounced, "46 hours ago!" 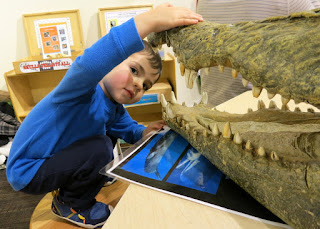 Posted by Peachy at 5:31 PM No comments:

My munchkin is one! 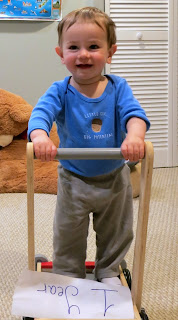 1) And he's said his first words this month:

da=dog.  He also likes to pant like a dog - he'll come up to them and stand there panting at them, confusing owners and animals alike.  Does he want to pet the dog?  Oh no, he just wants to stand there and pant at it.
brrr sound with his lips = car
haaaa, accompanied by much hand waving = hot
dadum = daddy (possibly other stuff too, I can't really tell)
mama = me!  For a while he's been yelling maaaamaaaaa when he cried at night, but not actually using it in any way during the day.  Then finally, about a week before his birthday, he said it for the first time in the correct context, without crying.  Made Mama very happy. 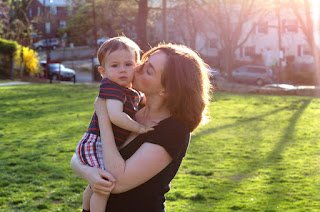 2) Sprout has also mastered clapping.  Well, 'mastered' might be a tad strong.  But he claps!  Mostly when others are clapping, but sometimes when he's dancing, and always with a big smile on his little face. 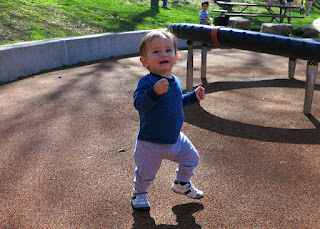 3)  In addition to the clapping, there's been a lot of other copying of adult (and Fuzzy) behaviors.  For example, as I'm getting ready for work, Sprout will find my hairbrush and attempt to use it - this usually results in him banging himself with the flat part - but very occasionally he manages to catch some hair, and is always very proud of himself when this happens.  Like the little mermaid, I've also seen him use other vaguely hairbrush-shaped objects to comb his hair - the standouts have been a toy saw and a large fork. 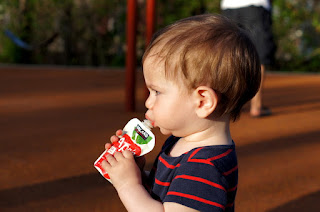 4) I don't know why, but this month Sprout has been the pinchiest of little pinchers.  He gleefully squishes skin between his little fingers, and laughs and laughs as you try to swat him away.  Despite filing his nails at every available opportunity, he somehow manages to have razor sharp claws at all times, so his playful pinching is actually quite painful. 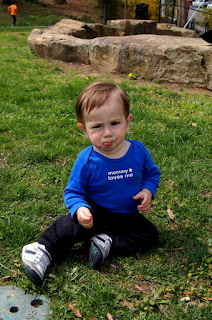 5) In his final act of development progress before he turned one, Sprout began to actually point with intention.  Between that and his milk/I want sign, communication between family members has never been better. 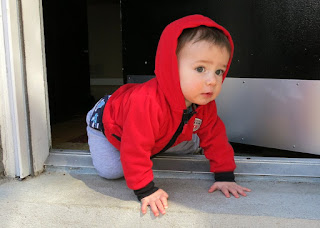 Posted by Peachy at 5:49 PM No comments: