Fuzz: "What's inside a fish?"
Me:  "Ummm..." Stalling for time while trying to think about how to explain organs, bones, and flesh.
Fuzz, while I'm still ummming:  "Fish!" 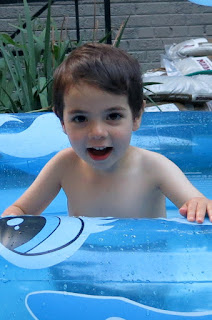 2)  Fuzzy developed a new-found fear of the dark, and of his dresser, and consequently hasn't been going to sleep easily.  In desperation, I resorted to science.  "I'm going to give you a very special medicine called a Placebo.  It makes kids sleepy and gives them very good dreams."  Fuzzy was immediately on board.  "Okay!"  Then, after I gave him a syringe full of water out of an old medicine bottle.  "Hey, this is funny, it tastes like water!"  I played it cool.  "Yeah, that is funny."  Fuzzy yawned, stretched, lay down, and said, "Okay Mama, I sleepy now."  Sadly the sleepy effect only lasted a few days, although the kid kept demanding Placebo for several weeks thereafter.

3)  Fuzz has been a little parrot lately, repeating newly discovered information to the closest person he can find, even if said person clearly already heard it.  For example, The Pitt was watching TV when Fuzzy wandered by with me.  The kid was captivated, and pointing at the action, said, "Look at dat!!"  The Pit explained that it was a game called ice hockey.  Fuzzy then turned to me self-importantly, and pronounced very seriously, "Dat ice hockey Mama!" 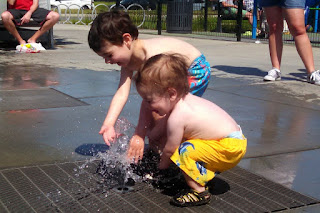 4)  Fuzz has been joking recently too.  Although...well, let me just recount his last one for you:
Fuzz: "Mama, I will tell you a joke.  Say 'knock knock' Mama."
Me, complying, although I was pretty sure he wasn't going to be able to salvage this one: "Knock knock."
Fuzz:  "Who's there?"  ...stares at me expectantly.

5)  Fuzzy has also started lying this month.  And he is *terrible* at it.  As soon as the words are out of his mouth, he starts giggling uncontrollably.

6)  I've been fairly impressed, because Fuzzy is actually remarkably restrained when Sprout hits him, steps on him, pinches him, pulls his hair, or otherwise assaults him.  Sometimes he shoves the baby, but usually he just runs to me and cries. 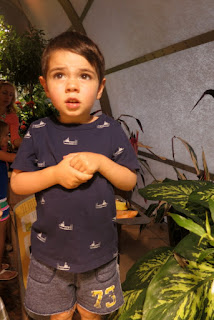 Posted by Peachy at 1:16 AM No comments:

1)  Sprout has slowed down on the new words a little this month:
dunnn = down
blowing noise = dandelion
wawa = water 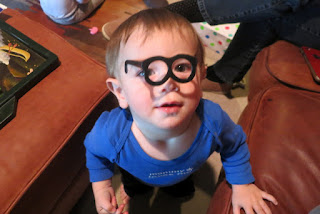 2)  However, he made up for it with loads of adorable noises.  When staying in Tahoe during our California visit in May, he saw multiple bear statues all over the place.  Now he very happily growls whenever he sees a bear picture.  It's quite a credible effort, I didn't realize such a little throat could make that realistic of a growl.  Sprout has also been happily babbling this month, chattering nonstop nonsense in his car seat and the stroller as we push him along. 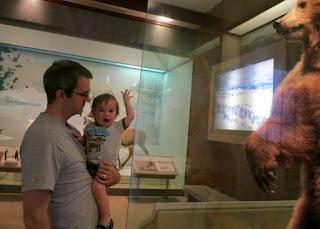 3)  During our California trip, my mom brought out a set of plastic golf clubs and balls that she had intended to gift to Fuzzy.  As it turned out, Fuzzy was not particularly interested in this pastime - but Sprout took to golf with great enthusiasm, and more skill then I would have imagined.  He was pretty good at actually hitting the giant balls, and also distressingly good at knocking Fuzzy or his cousin over with the clubs. 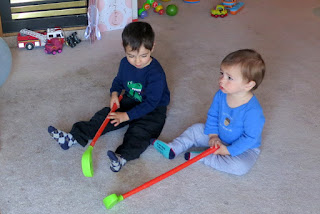 4)  There's also been evidence of jealousy from Sprout - when I'm holding both him and Fuzzy, the baby will now make a determined effort to push his big brother out of my lap.  Previously this type of behavior was confined to Fuzzy, and now there is twice the shoving when both of them are feeling territorial. 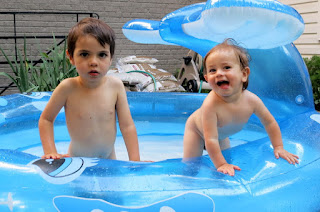 5)  In a potentially linked behavior, he's also been very snuggly with me in the mornings (he usually moves into our bed sometime between 1 and 3 am).  When he wakes up, he rolls over and adorably squishes himself against me, rubbing his cheeks on me and smiling beatifically if I pat him.  There's really no better way to wake up than with a snuggly, huggy baby. 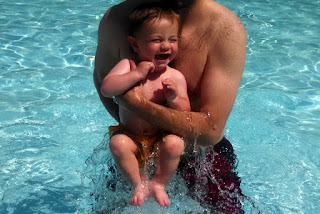 Posted by Peachy at 1:19 PM No comments: