1)  Fuzzy is getting better and better at telling stories.  He has a microwavable bunny, intended to keep him warm at night.  Unfortunately, after repeated use last winter, the bunny has acquired a distinct and not particularly pleasant smell.  I brought it into his room the other day, and Fuzz demanded to know where the smell was coming from.  When I explained about the bunny, Fuzzy launched into quite a long spiel:

"Da smell is going to go up da tree, and the birds in the nest will wake up and say 'oh no!'  Then the smell will go down, down, down, into a hole.  Da squirrel dug da hole, and da smell will go in it wit da acorn!" 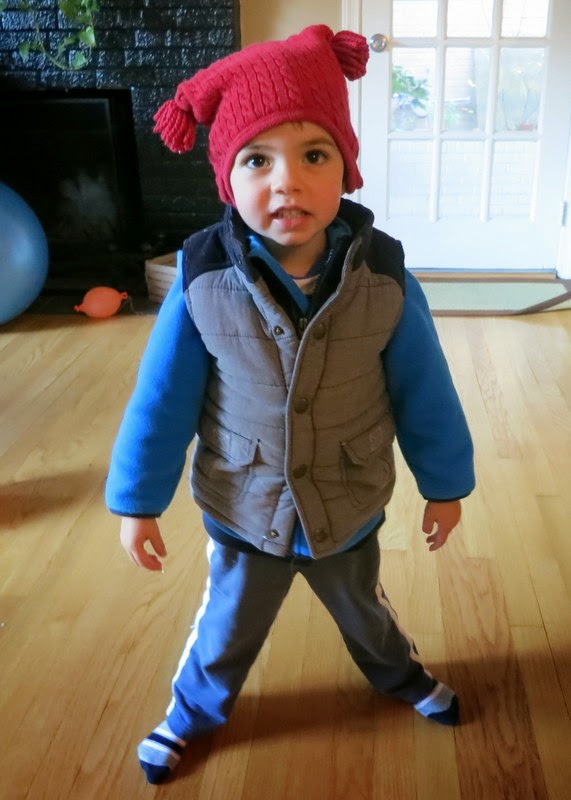 2)  In addition to the smelly bunny, Fuzzy is also the proud owner of a towel with a hood on it.  However, he refuses to use the towel for it's intended purpose, and instead calls it his 'hooded blanket.'  When he gets upset, he sometimes demands to be wrapped in his blanket, and he always wants it to cover him at night.  One evening after I covered him with it and said 'good night,' he told me the following: 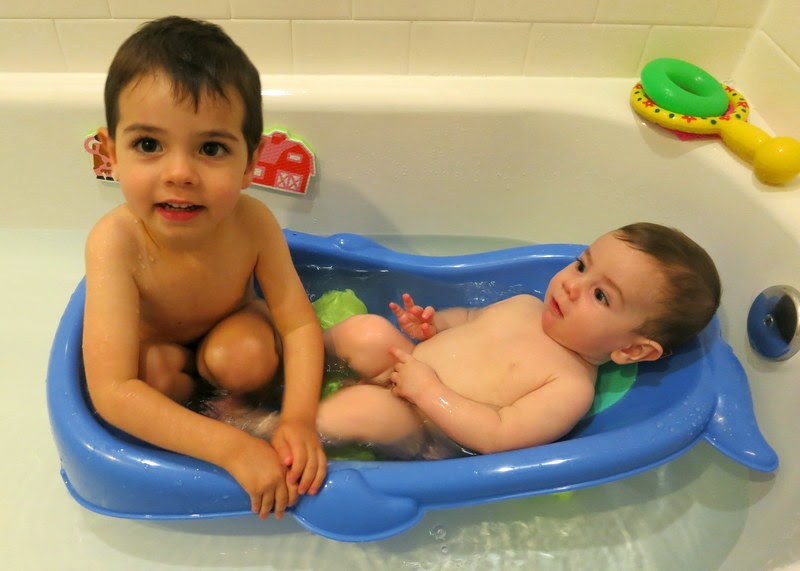 3)  In anticipation of a visit by The Pitt's father, Fuzzy told me the following:  "Gandpa Pitt is on a train.  Choo choo!  He's going through da tunnel and down the tracks and to my hoooooome!"

4)  Mid-way through the month, we experienced a series of unfortunate events - one evening Fuzzy demanded to be picked up while I was heading upstairs with an armload of stuff, and when I tried to scoop him up, he ended up flipping over my arm and falling back to the hardwood floor, right onto his head.  That night he woke up and threw up twice, so I thought he might be coming down with a stomach bug.  But in the morning, he was fine, so we went down to the playground.  There, after playing happily for a few minutes, Fuzzy saw one of his friends approaching, and ran to greet him.  The boys ended up hugging on the sidewalk, and then promptly got into a shoving match and fell over.  At 25 pounds, Fuzzy ended up on bottom, smacking his head hard against the cement.

Usually Fuzzy shakes off injuries pretty fast, but after this bump, it took me almost ten minutes to calm him down.  Then he threw up all over both of us.  After I got him changed he started whimpering again, so I sat on the swing and rocked him, at which point he fell asleep.  Around this time it occurred to me that kids throw up after concussions, not just with stomach bugs, and we called the pediatrician, who asked us to come in.   By the time we actually got to the doctor's office, Fuzzy was his usual cheerful, babbling self, and he aced all the neurological tests. 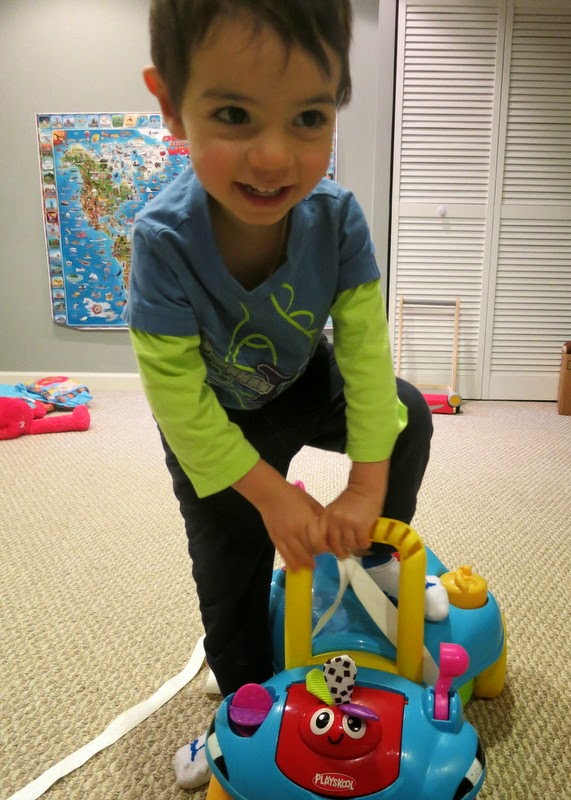 Unfortunately, the repeated vomiting after hitting his head had the pediatrician rather concerned, so she sent us to the ER for more observation.  There we sat for a few hours before seeing a doctor, who asked Fuzzy what happened.  "I bumped my head on da' cement!" This doctor went through the same neuro tests as the pediatrician, and then sent us home with a concussion diagnosis.  Except two-year olds can't really be treated for concussion, so the only advice we got was "try to avoid him hitting his head again!"

We did our best, but now whenever Fuzzy is feeling a little sick, he tells us that we need to take him to the hospital.

5)  Fuzz is now asking 'why' questions instead of 'what' questions, and also talking nonstop.  He also sometimes talks in his sleep about the events of the day, and occasionally wakes up at night wanting to chat. 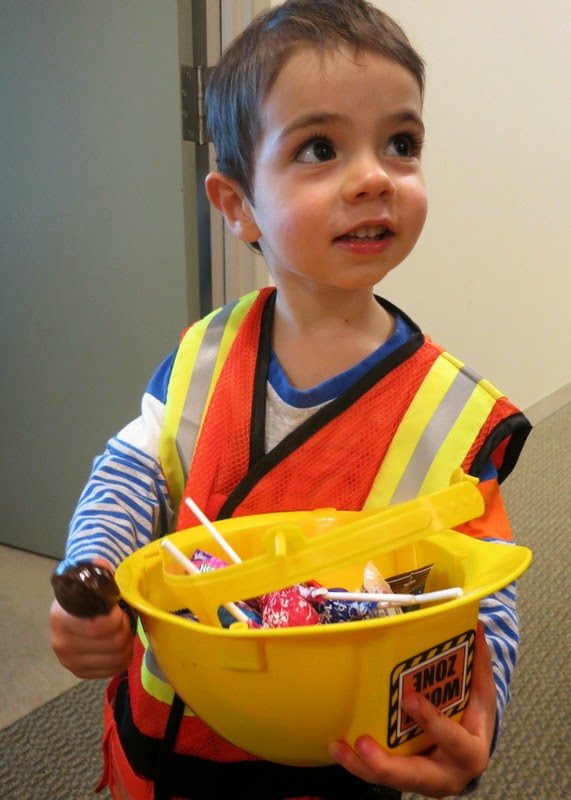 6)  Fuzzy has gotten wise to the fact that visitors bring him presents.  For example, we were driving to preschool when we had the following exchange:

"Mama, mama, der no mo' pumpkins - Hawoween is almost here!"
"Err, no, when there are no more pumpkins, that means that Halloween is over.   But Thanksgiving is almost here.  Do you know who's coming to visit us for Thanksgiving?"
"BABA!"
"No, I wish Baba was coming too, but Dina and Noam are coming!"
"OH!" Considering pause, then, "Will dey bwing me a surpise?!"
"I think so baby."
Very wistfully "...maybe it will be a cane tuck."

Luckily for him, Dina and Noam indeed brought him a crane truck, and there was much rejoicing.

7)  After a month of hating preschool, Fuzzy made a friend, and now likes going again.  "Is Andoo at pweeschool?  I want to see Andoo!" 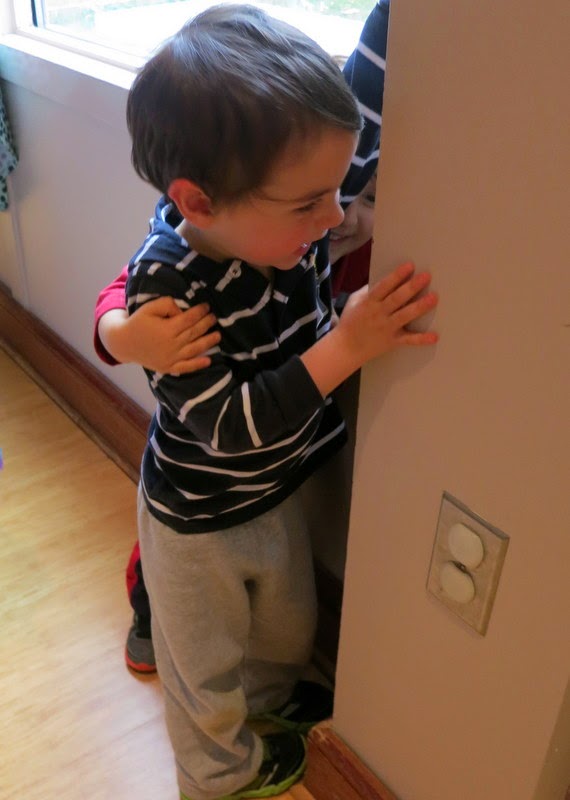 Posted by Peachy at 3:57 PM No comments:

1)  As predicted, this month was indeed all about movement.  Once Sprout learned to lift his body up, he spent a little while using a unique and painful method to get around:  he would get up on all fours, and then fall forward onto his face.  Then he would get up on all fours again, and fall forward a few more inches...and so on.  After a few days of this, he started Army crawling a little bit - sort of slithering around on the floor without lifting himself much.  Then a few days later, he began combining the two movements:  he started getting a few forward movements on all fours, and then would plop back down and Army crawl. 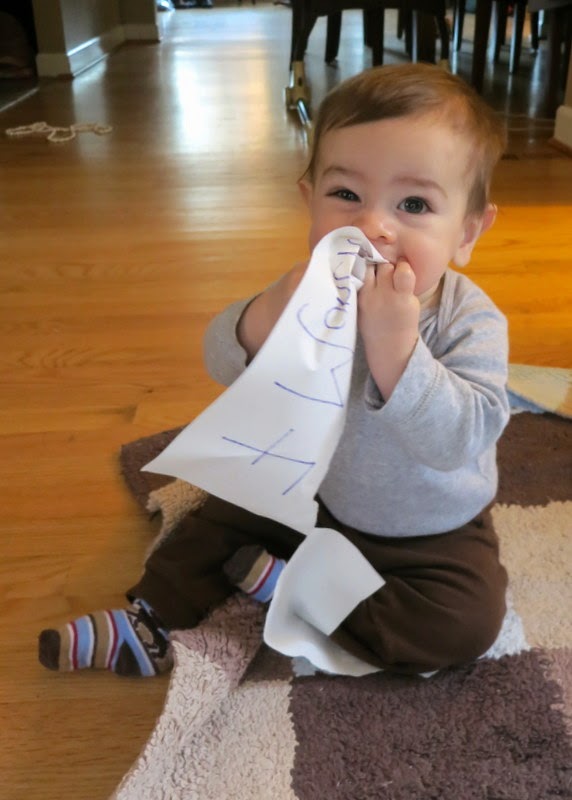 This opened up all sorts of new vistas for him, and whenever he spotted a previously un-tasted object, he would get a gleam in his eye and scuttle to it as fast as possible.  In this manner he tasted a plastic bag, a wide variety of discarded tissues, and multiple pairs of shoes before we wised up.  Somewhere in all this motor movement, he also figured out how to get to a sitting position by himself. 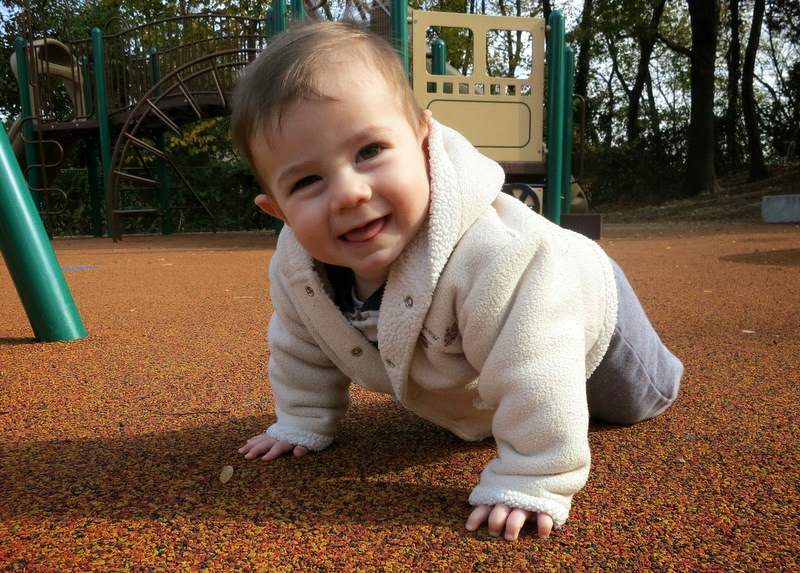 2)  By the beginning of November, about two weeks after his first attempts, the baby was legit crawling.  Apparently he's an overachiever though, because as soon as he got crawling mostly down, he started trying to stand by pushing his arms against the floor and doing a sort of downward-facing dog yoga pose.  Within a week, he managed to pull himself up to a standing position in the crib, and is now working on other, more slippery surfaces.  It should be noted that even at this stage, he still hasn't fully mastered sitting - he periodically just tips over and bumps his head for no apparent reason. 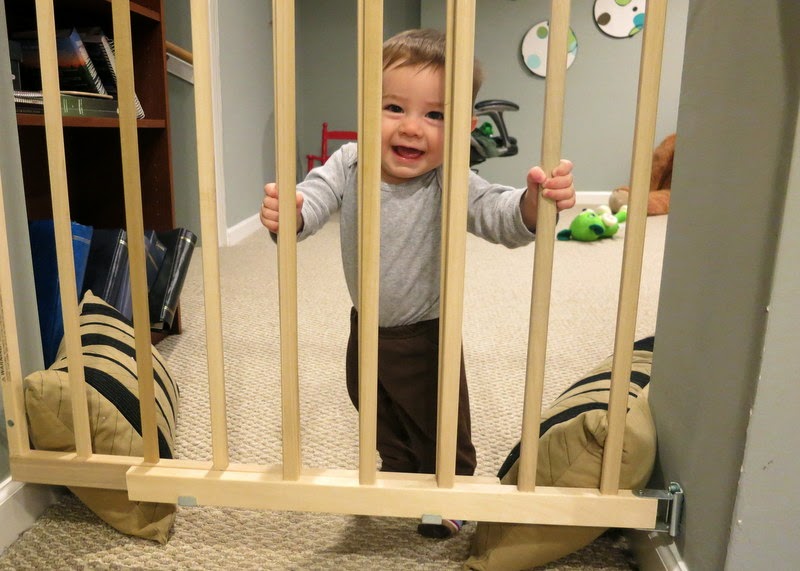 3)  In other developments, Sprout also enjoys kissing his Mama.  Unfortunately, this is a rather rough form of affection - he grabs at the hair on either side of my face, and jerks my head forward until he can slobber on my cheek.  His excited, huge grin makes this experience worth the lost hair I then have to pick out of his chubby clenched fists. 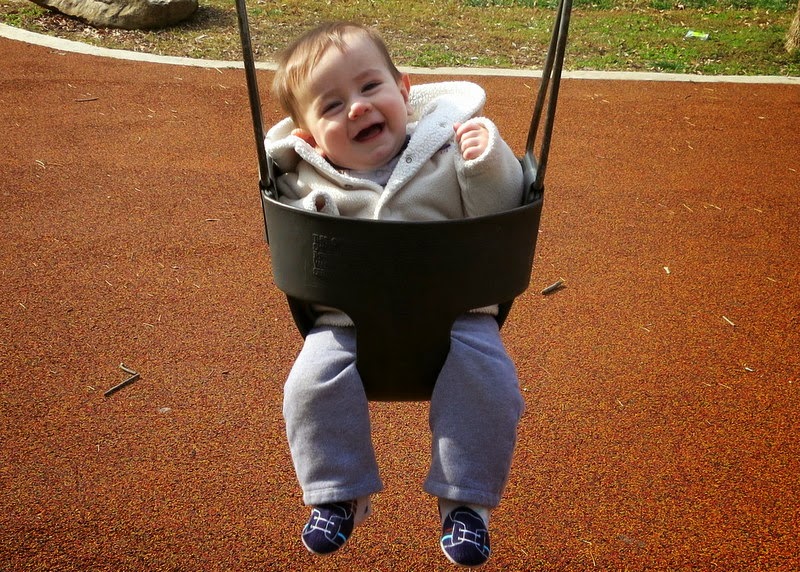 4)  Sprout was never particularly cooperative with diaper changes, but this month he's taken the wiggling to a new level.  It now requires either two people to hold him still, or one person with a dazzling new toy or inventive noise.  Otherwise, forget it, the kid twists and turns and twists and turns, making a five minute diaper change last about six times longer than necessary. 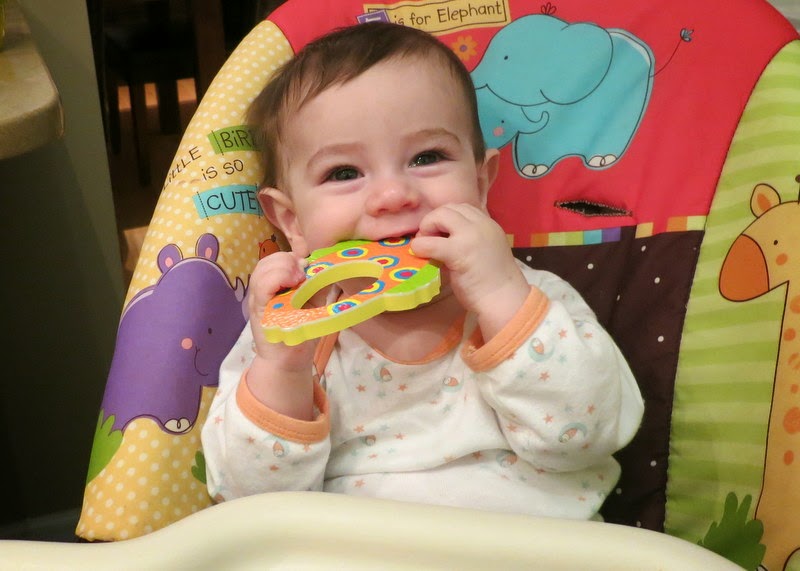 5)  Fuzzy has been bringing home cold after cold from preschool, and then giving said cold to Sprout.  This is bad on a lot of levels, not the least of which is that the child struggles like a feral animal whenever a tissue comes near his nose.  Paradoxically, tissues also happen to be his favorite snack - if a box is left unattended somewhere in Sprout's reach, he will lunge toward it, grab a tissue, and quickly stuff it in his mouth while chewing energetically. 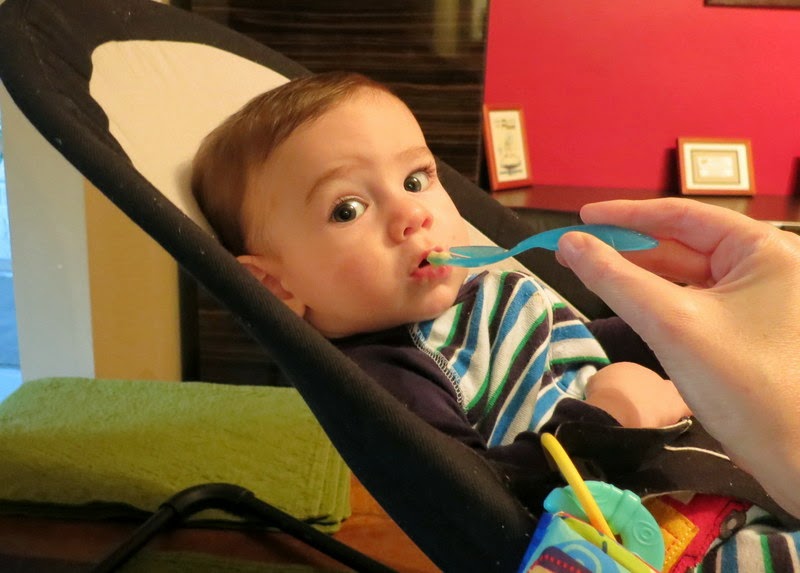 6)  We've been slowly introducing Sprout to solid foods, prompted by an interest on his part: when he sees us eating now, he will smack his lips like an old man missing his dentures, while pointedly staring at whatever delectable object we are putting in our mouths.  So far, he's liked almost every baby food we tried, although, par for the course, he quickly grows bored and refuses to eat more than an ounce or so. 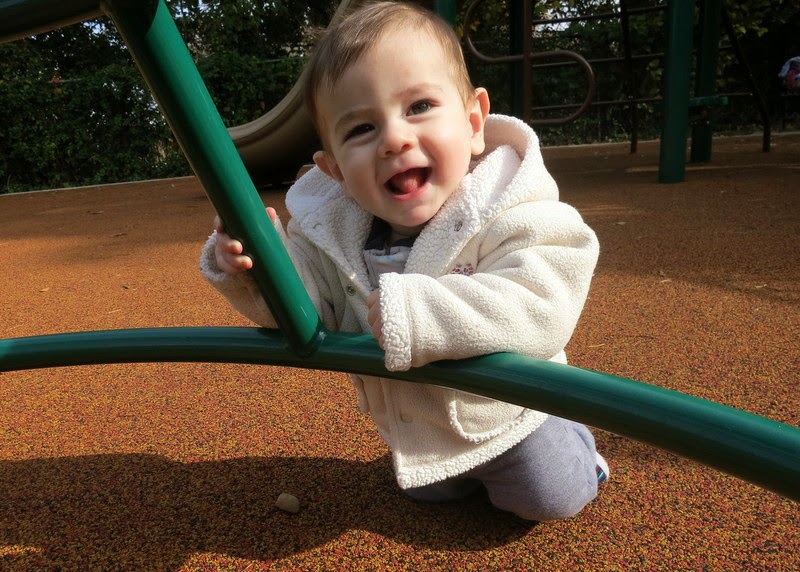