So a funny thing happened around the time the baby turned 6 months old - he somehow transformed into a real person, instead of the adorable but decidedly proto-human he had been. 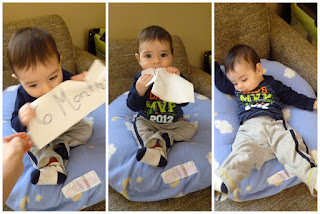 I think a lot this has to do with his mastery of sitting.  About a week before his 6-month birthday, he started balancing himself in an unsupported sitting position.  Previously he would list to and fro before flopping over to one side.  Now he could keep himself seated, and this opened up a whole new world - he could reach a variety of toys arrayed in front of him, see a room instead of just the ceiling, observe the street from his stroller, and sit up in a high-chair during dinner just like an actual member of the family.

The Pit started taking him down to the carpeted basement for playtime, and we figured out that he knew how to play a version of catch.  It's more roll than throwing, but he totally understands the conventions - when handed his ball he flings it in our general direction, grins, and then patiently waits for it to be returned to his grasp via rolling or light bouncing.  Then the cycle repeats.

He also impressed me the other day by decoding the operation of one of his musical toys - this thing is a triangle of plastic, and when hit or shaken, it plays several seconds of music.  I keep it by his diaper changing station, and used to shake it and then hand to him.  He would fling it about, more or less accidently activating the musical function and always looking both surprised and delighted when it played.  Now I don't need to activate it first - when I give it to him, he clenches it tightly in one hand, and then slaps it with the other.  The music plays, he listens, and then when the music stops he slaps the toy again.

The impressive part is that he started generalizing this to other toys - now when handed an object, the first thing he does is test its musical potential by slapping it in exactly the same way.  Since many of his toys have some sort of rattle or music built in, his new-found technique brings him much satisfaction.

Unfortunately, another thing that is currently bringing Fuzzy satisfaction is flinging said toys off of his high chair and then screaming until they are returned to him....I guess as parents, we win some and then we lose some.
Posted by Peachy at 9:28 PM No comments:

The 6 month round-up post is coming, but first I need to relay a conversation I had with my grandmother yesterday.  She had just watched a video I sent of Fuzzy trying and subsequently hating bananas, and her opinion was that the soft plastic baby spoon was to blame.  "I will buy him a silver spoon!" she proclaimed.

Now while its true that I'm feeling quite bourgeoisie these days, what with my live-in nanny and twice monthly house-cleaners, I thought that literally buying the kid a silver spoon might be taking things a bit far...after all, I'm still feeling somewhat guilty for paying a nice Asian lady to paint my toenails two months ago.

Anyway, it turns out that the Russians consider silver spoons the healthiest spoons with which to feed children.  I was all set to mock this as yet another old country superstition on my grandmother's part, and then I did a quick Google search - turns out, I shouldn't make fun of old people willy-nilly.*

Quothe Wikipedia: Beyond their value and aesthetics, silver utensils self-sanitize: silver has antimicrobial properties, due to the oligodynamic effect.

* And not just because I used the term willy-nilly in a real sentence.
Posted by Peachy at 1:47 PM 1 comment:

The Pit Called This Manipulation

Fuzzy was having an off day - he didn't nap well, he wouldn't eat, and he generally spent most of his time whining.  When he wasn't whining, he was either refusing to be put down, or squirming like he wanted to be dropped.  I was working from home, and it took both Maya and I to manage him and get anything done.

So toward the end of the day, Maya was making dinner and I was holding him on my lap on the couch.  He had finally settled down a little, his head resting on my shoulder.

I put my lips by his ear, and whispered tenderly, "You've been such a booger today...but I love you anyway."

And wouldn't you know it, he whipped his head around, planted a wet smooch right on my cheek, and grinned.

Needless to say, all was forgiven.
Posted by Peachy at 12:29 PM 3 comments:

I'm working from home today, and came downstairs after my shower to find Maya and Fuzz happily napping together on the basement floor.  So cute.

Now for the roundup of recent developments:

1) This isn't really a development per se, but I would be remiss if I didn't show off a picture of Fuzzy in his Halloween costume.  The Pit wanted something more manly for our boy, but his first choice of lobster costume was not available in Fuzzy's size on Amazon, so I got to pick my favorite: 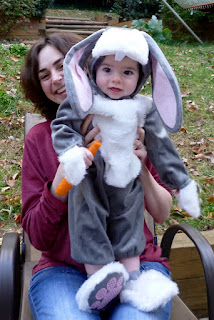 Mommy's little bunny he is.  As an aside, thanks to my soon-to-be brother-in-law for the gift of Amazon Prime - we've used it for purchases both significant and trivial recently, but I think the bunny costume wins first place.

2) Last post I mentioned Fuzzy putting his cheek against our chests when tired - in the last few weeks, this behavior has morphed into just plain putting his head down when tired.  No matter what position he's in, he will lean over (twisting uncomfortably if necessary), find any available surface, and plant his little cheek against it.  His parents have predictably dichotomous reactions to this: I find adorable, and The Pit worries that the baby is straining his neck.

3) Fuzzy is also embracing his destiny.  He knows he will be tall one day, and doesn't want to wait for that day to arrive.  In addition to demanding that he be stood on his own two feet, the baby also loves being stood up high on my shoulders.  This is a rather tiring position for mom, but Fuzz delights in it so, surveying all he commands with an air of satisfaction.

4) We've had our first real diaper blow-out.  Astute readers may remember an incident in the hospital when Fuzz was first born, but that was baby poop in comparison to our situation a few days ago.  See, Fuzzy used to be quite the prolific pooper - I would say at least 10-12 times a day in his first month.  This meant that any one incident was relatively manageable.  However, over time he's pooped less and less frequently, and sometime in the last few weeks, he's settled down to a respectable once-a-day schedule that makes all of our lives easier.  Except this past weekend, he skipped a day.

The following morning, The Pit was being a wonderful husband, and agreed to take the baby so I could sleep in...5 minutes later I heard him frantically yelling my name.  I rolled out of bed and rushed downstairs to find him at the changing table, restraining Fuzzy from flailing his legs in a diaper that had clearly been outmatched - poop was coming out of the bottom of the leg holes, out of the top on his back, and out of the front to cover his stomach.  The onesie was covered, the pajama pants were stained, and thank god we had put Fuzz in a sleep sack, or the sheets would have needed changing too.  And since we've been feeding the baby rice cereal for the past few weeks, this poop smelled...adult.  After I washed the baby in the sink and The Pitt took all the soiled clothing to the laundry room, the nursery still reeked, and required a good airing-out before we could breath comfortably.  So there's that - a rite of parenthood, accomplished.
Posted by Peachy at 10:01 PM 1 comment: