Two weeks ago, when Fuzz was 9.5 months, I wrote the following two paragraphs and forgot to post them:

The last two weeks have brought the greatest of triumphs - multiple consecutive nights of sleep.  Prior to his 9 month birthday, Fuzzy would wake anywhere from one to three times a night.  Usually because he was hungry, sometimes because he needed to burp, sometimes because his diaper had leaked, and often, for no discernible reason whatsoever.  In his first 8 months, Fuzzy slept through the night a grand total of two times.  Then, on the night of January 24th, he went to bed and didn't wake up until morning.  Then he repeated this beautiful, beautiful trick for 5 more nights.  One the seventh night, he woke briefly at 12:30 am, and went back to sleep after 20 minutes of rocking.  Now, fingers crossed, we are working on another consecutive week.

In other less exciting but nevertheless reportable developments, Fuzz has also sort-of learned to point and wave.  I say sort-of because while he has the movements down, he doesn't realize the correct context for said movements yet.  Thus, I will sometimes find him sitting on the floor by himself, one finger pointed up in a "We're number one!" gesture, quizzically looking at his own hand.  Similarly, no force on earth can compel Fuzz to wave back at someone who is waving at him - but he will randomly start waving his chubby food-covered hands in the middle of dinner at nothing in particular. 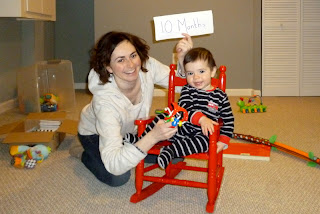 1) Now, at 10 months, I can provide a little bit of an update.  Sadly, shortly after I wrote the paragraph about sleeping through the night, Fuzzy started working on another tooth, and sleeping was suddenly the last thing on his mind.  For several nights before the tooth poked through, he woke up every 2-3 hours.  Now that there's a visible nubbin on his top gum, his sleep has improved somewhat, but he's still up at least once a night.  Gah.

2) He still hasn't figured out pointing at something specific, but waving we have down.  We were Skyping with my grandparents, and as always, they spent approximately 95% of the chat randomly waving at him.  Except this time, instead of staring at them blankly and drooling, the kid actually raised up his little hand and waved back.  I thought they were both going to have heart attacks then and there from joy.

3) In other news, we have further proof of Fuzzy's memory skills.  Maya reported the following story to me at the end of February: She was changing his diaper several hours after his last snack of Cheerios, when Fuzzy sat up, shoved his arm down her shirt, and started to grope about purposefully.  Maya tried to pull him away, but he wasn't having any of it, and after a minute or two, he triumphantly pulled a Cheerio from her bra.  Apparently he had thrown one down there earlier when she wasn't paying attention, and now he wished to retrieve and eat his cleverly hidden snack.

4) Fuzzy is quite taken with animals, especially the two highly unfriendly cats that occasionally visit our backyard.  Whenever he gets a glimpse of these guys, he pulls himself into a standing position by our backdoor, bangs on the glass with excitement, and hoots.  The cats glance at him with disinterest bordering on disgust, as cats are wont to do.  This has no effect at all on his enthusiasm, and in fact, he gets even more excited whenever he catches one of them staring back at him with disdain.

5) At the beginning of the month, Fuzzy figured out a little bit about sharing.  We always try to brush his teeth in the bathtub with this rubber thingie that fits on one of our fingers.  Unfortunately, we are always thwarted, because although Fuzz is completely uninterested in pacifiers, he loves to suck on this rubber "toothbrush."  So after a few seconds of brushing, he always pulls it off my finger and shoves it all the way into his mouth, then hangs out like that for the remainder of bath time.   Anyway, one day, he randomly pulled it out of his mouth and tried to shove it into mine.  He patiently waited a couple of minutes while I pretended to suck on it, and then shoved it back into his own mouth with an air of satisfaction.  For a few weeks, this was the only item he wished to share with me, but he did it consistently ever night in the tub.  Now, he's mastered the concept in other areas of his life, and periodically offers us his toys, food, and random bits of dirt he's picked off the floor.