This month's major milestone was a haircut given by Mama.  Clearly Mama needs more practice in order not to make her child look like a character in Dumb and Dumber. 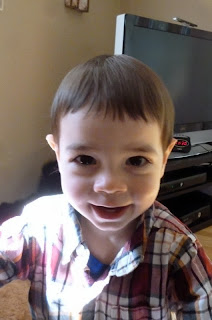 1)  New words this month:
ka = crab or cloud, depending on context
na = nuts
na na = tomato (previously this referred exclusively to bananas, but now it can - confusingly - be either)
nananana = running
oh oh = exactly what it sounds like - he says this whenever something is wrong, from a giant spill to his slipper coming off

2)  As I mentioned in my last post, Fuzzy has a highly idiosyncratic way of saying apple - he pronounces it as "buh buh."  This was driving The Pit crazy, and he kept trying to explain to the baby that you say it thusly: "aaaah puuuulll."  Fuzzy listened intently to this explanation, and then when The Pit asked him to repeat, he said "Aaaaah..." and The Pit said "Now pullllll!" and Fuzzy grabbed at The Pit's shirt and pulled for all he was worth. 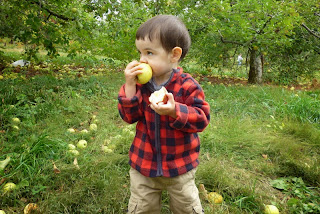 3)  Fuzz has recently expanded his love of running around in circles to a new game: he holds his arms out and spins round and round until he gets dizzy.  Then he staggers about with a grin on his face until the inevitable crash into either the floor or another immovable object.  Then the grin disappears and he looks at us with a wounded expression, hitting himself in the head to indicate that he went boom.

4)  Fuzzy has really figured out hand holding too - not so much as a sign of affection, but more as an effective technique to lead me places.  He will come over, grab my hand, and drag me to whatever object he wishes to be examined, lifted up, or otherwise engaged.  When my hands are held too high for him to reach, he makes do with a pant leg.  Once, when I was down on the ground with him, he grabbed me by the necklace and started dragging me along like an animal.  When I told him Mama wasn't a doggy, he merely laughed with delight and pulled harder. 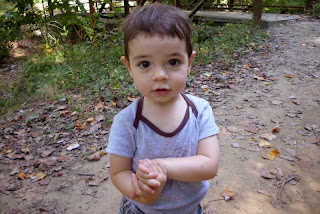 5)  The baby demonstrated his reasoning skills when we went out to eat the other day - it was at a Mexican restaurant, where Fuzzy loves the tortilla chips, which he calls cackers.  When he saw the basket placed on our table, he yelled "cacker" over and over until he was handed a chip.  However, after trying one or two, he started playing with them - or so I thought.  First he demanded a drink from my water glass, and then, when I obligingly brought the water close to him, he quickly pushed his hand in the water, chip and all.  I started scolding him for playing with my water, telling him it wasn't there to drop in chips - but then The Pit stopped my lecture by pointing out that the baby was actually not releasing his chip in the water at all.  Apparently, he was softening it.  After a couple of seconds, he pulled it out and happily ate the thing.  How he learned to do that is beyond me - I don't think anyone has actually previously shown him that water softens hard food.

6)  Fuzzy's balancing has really improved this month too, to the point that he can now go up stairs like a real person - he grabs the handrail, and walks up natural as you please.  Watching him do this makes him seem like such a big boy - until you see the lurching disaster that is walking down those same steps. 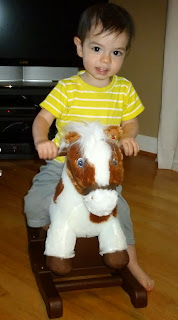 Posted by Peachy at 5:21 PM No comments: