1)  I needed to go to dentist, and when informed of this fact, Fuzzy started whining and crying that he didn't want me to leave.  I left him in the living room throwing a little tantrum.  A few minutes later, he came into the kitchen and said, "Mama, I feel betta' now.  I will let you go to the dentist." 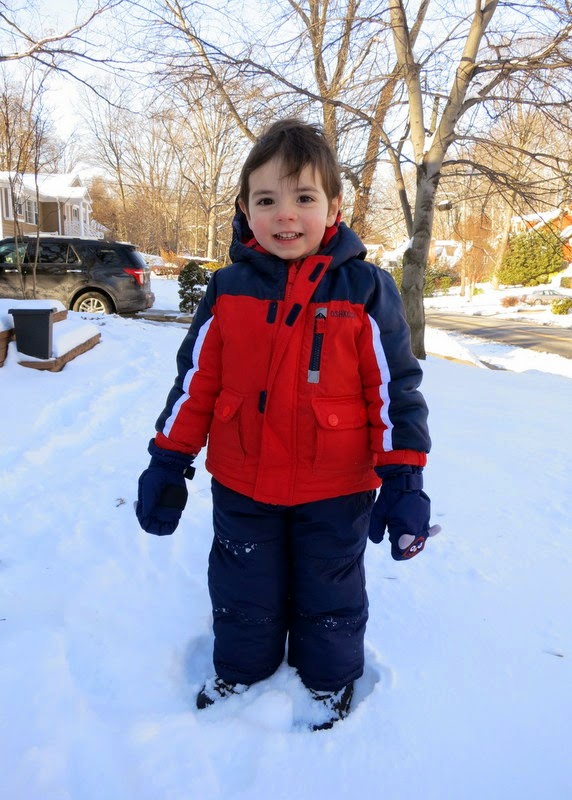 2)  Ever since our visit to California over the holidays, Fuzzy hadn't sleep all the way through the night - he either crawled into bed with The Pitt, or made Daddy sleep in his room on a mattress on the floor.  Finally, I decided enough was enough, and we had a serious conversation/bribing session.  I began by telling him that he's was a big boy, and that big boys sleep by themselves.  Fuzzy presented a counterargument: "But Daddy *likes* to sweep on the mattress!"

At this point I decided to capitalize on his new interest in fairy tales, and presented him with a book I'd purchased for the occasion.  I showed him that it had *so* many new stories, and and then informed him that unfortunately, these stories were only for big boys who slept in their own rooms without Daddy.  Further discussions on this topic led to him actually leaving us alone at night.*

*Sort of related and funny - after I told him that the new book had stories and fairy tales, he kept asking me where the tails were in each story.  Explanations of homonyms did not help. 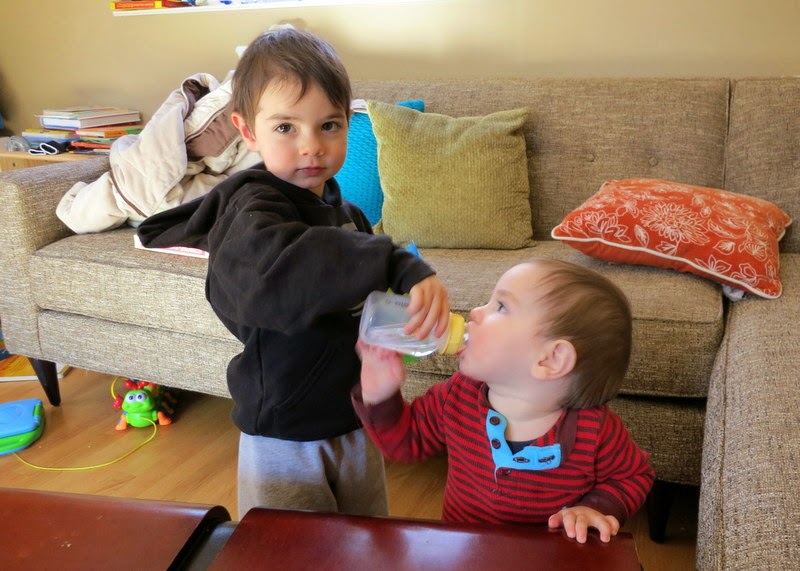 3)  On the morning of my birthday, Fuzzy started throwing up at 3 AM.  Daddy took care of him until about 7 AM, when he proceeded to crawl into bed with me.  I left him watching cartoons on the iPad while I showered, only to hear the unmistakable sounds of puking as I turned off the water.  After I stripped the bed, pulled off Fuzzy's pajamas, and put him in the shower to wash off, he finally stopped crying, and instead started apologizing: "I sowee I few up on your bed Mama."

I reassured him that it wasn't his fault, and after a few minutes, he started to smile. "Happy Birthday MAMA!" he said, as I finished washing the puke from his hair.  While it wasn't precisely the scenario I had anticipated to start the day, The Pit salvaged it with an amazing Pavlova cake, which we fed to our puking child.  I mean, if you're going to throw up anyway, you might as well throw up cake. 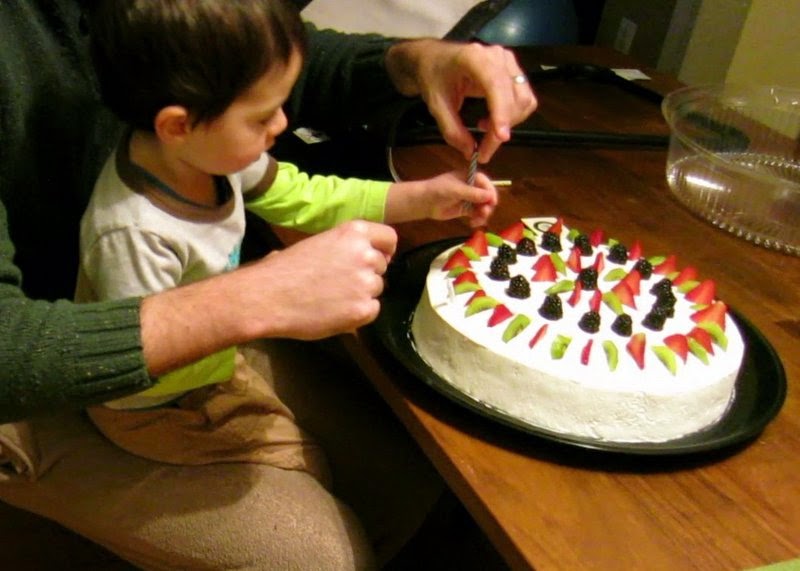 As evidenced from the picture below though, he is sometimes nice to his brother: 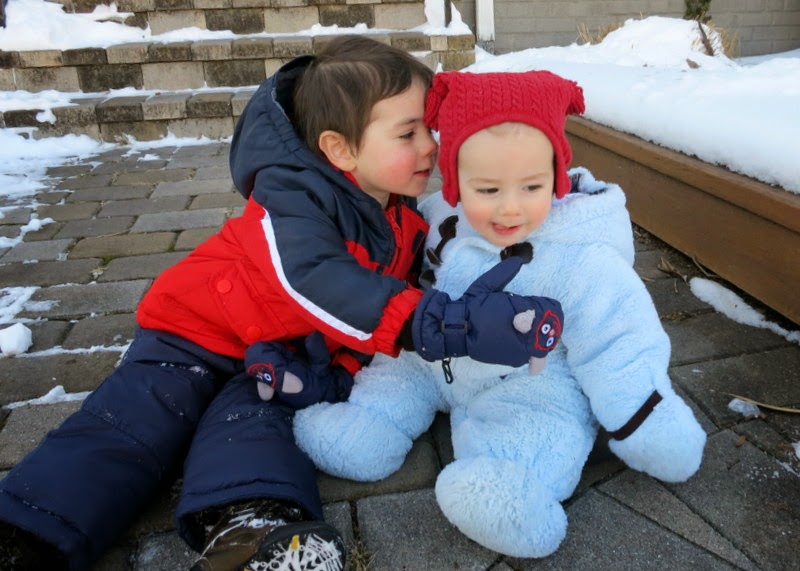 5)  Then again, a few days ago, I found myself saying something I never thought I'd have to say: "Stop wiping your nose on your brother's hair!" 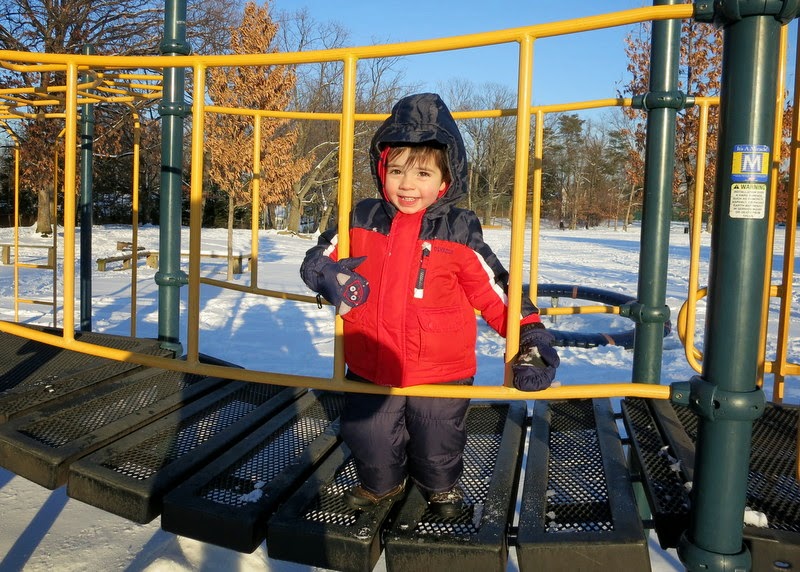 6)  I guess it's a right of passage of some type for toddlers - Fuzzy has started adorably mispronouncing the word 'animal.'  For example, once he gathers all his stuffed toys, he turns to me and announces:  "All my aminals are on da bed!" Posted by Peachy at 1:30 PM No comments: 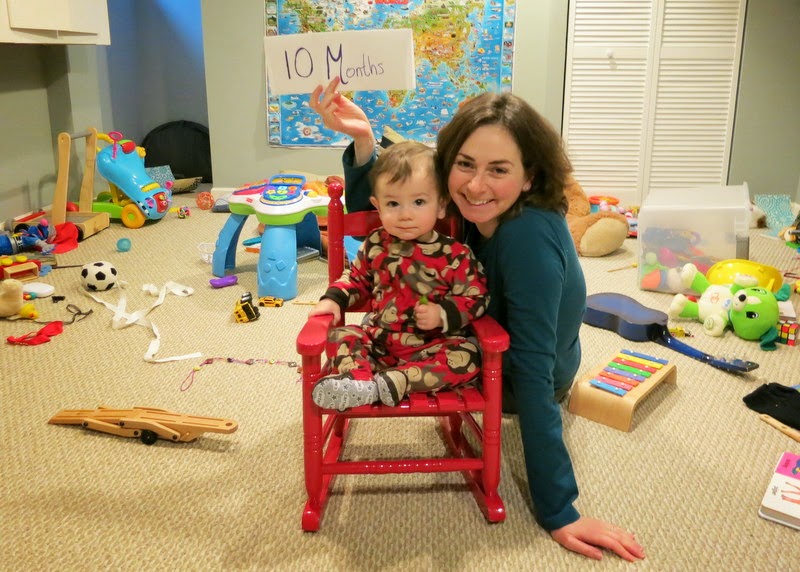 1)  Around the 9.5 month mark, Sprout had a really big week.  He *finally* got his first tooth and took his very first unassisted steps.  Then, typically for him, he turbocharged walking.  He went from his first tottering steps in the morning of February 1st to taking 4-6 steps unaided steps in the basement that evening. 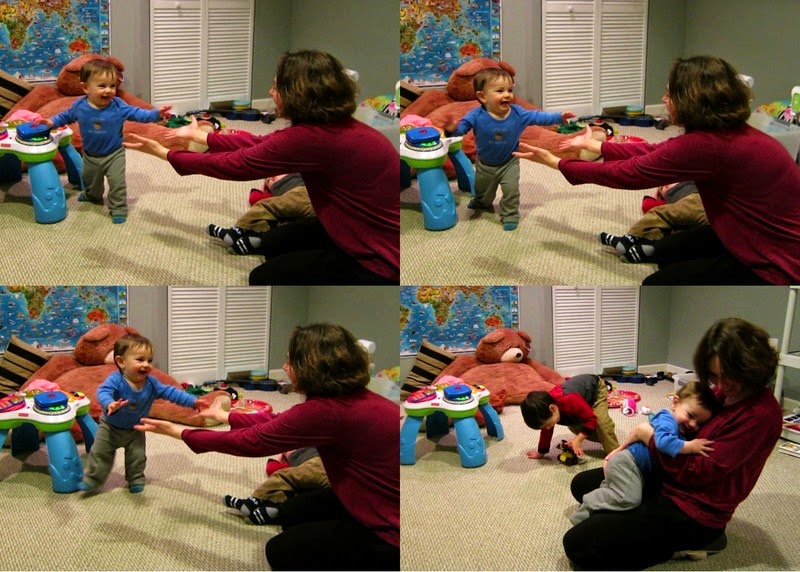 2)  Sprout is starting to use objects for their intended purposes.  The other day he was playing with a an empty cup under the dinner table while I cleaned up in the kitchen.  Suddenly, I heard a loud slurping noise, and when I went to look, saw the baby pretending to drink from the cup. 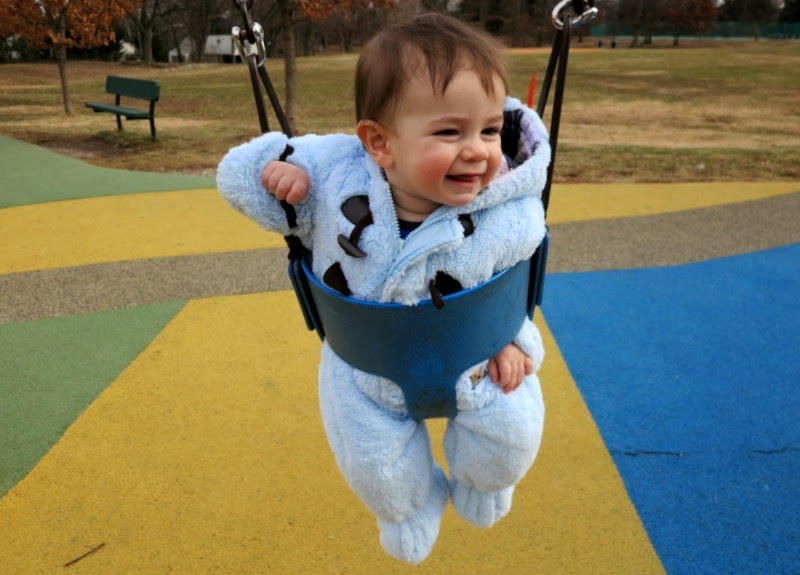 3)  He's also taken to copying some gestures - for example, when I leave in the morning and both Fuzzy and Maya wave to me, Sprout waggles his fingers at me too. 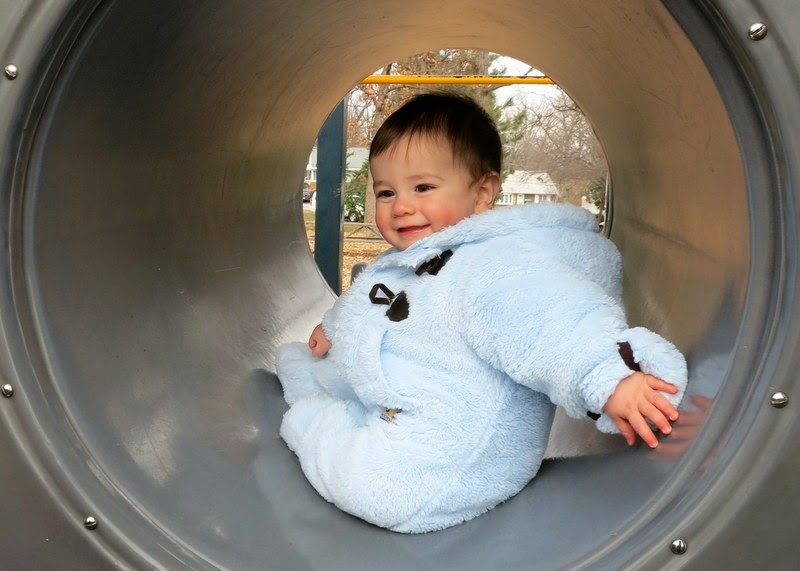 4)  Although this month Sprout started walking on his own, he still loves to push something in front of him.  However, not something specifically designed for this task like a walker toy - no, he likes to find a box, a foot stool, or a really heavy chair, and then push those in front of him as he toddles around. 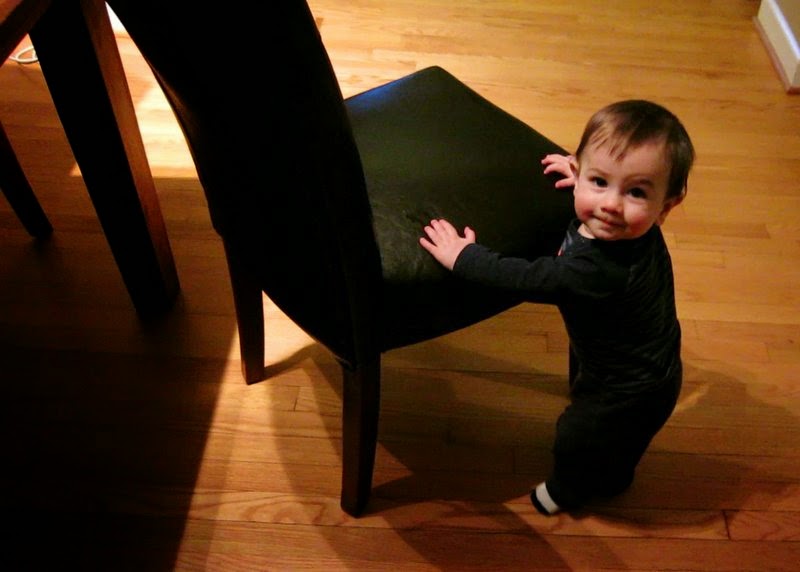 5)  He's been doing a lot of tongue waggling recently, and like his brother at this age, is making a really adorable burbling noise - ablalblahlah, and so on.  Periodically he will wake up in the middle of the night and talk to me like this for 5 or 10 minutes, at which point it is less cute, but still charming enough that I don't want to put him down. 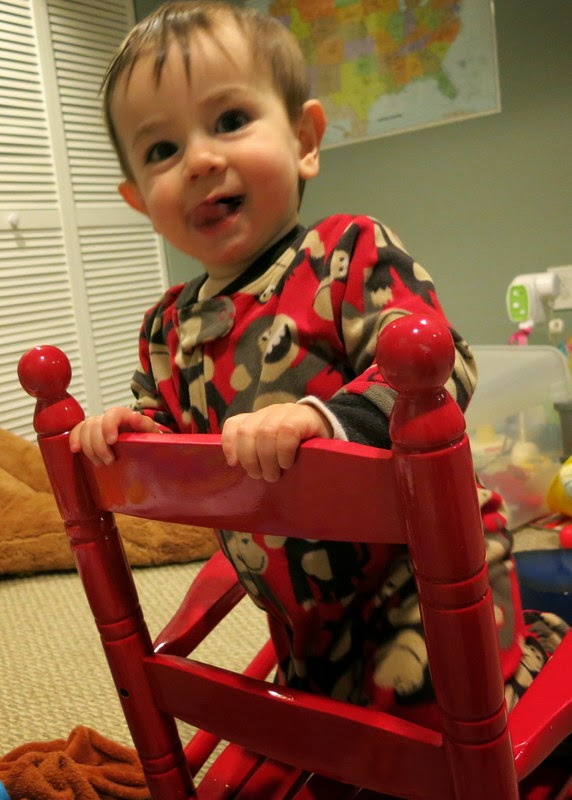 6)  Towards the end of the month, Sprout started points at things.  Well, sort of pointing.  He tends to keep his arm at a 45 degree angle, such that we keep guessing like so:  "...that's...a tree...another tree...a...streetlight...possibly a cloud...likely a power line?" 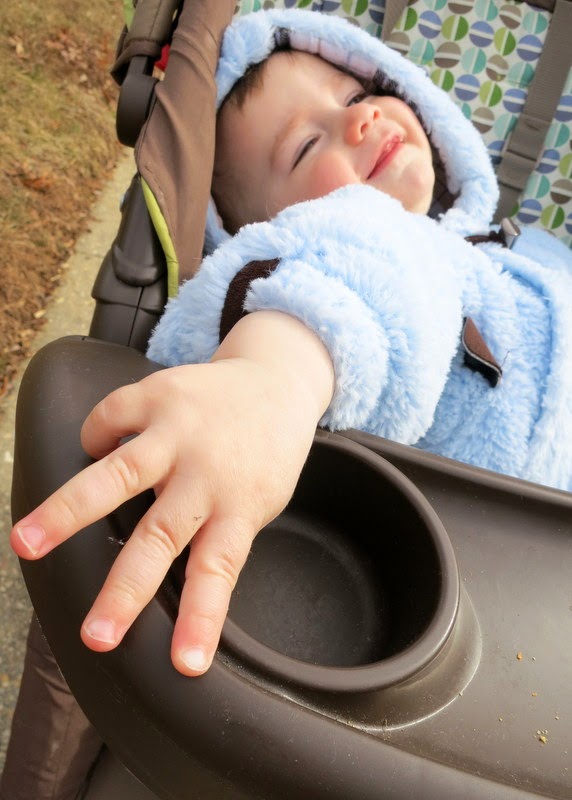 7)  The baby loves his big brother, and especially his hair.  Whenever they are in the bath together, he practically lunges at Fuzzy, and grabs at his hair.  Understandably, Fuzzy is a little disgruntled at this, and will quite indignantly let me know: "Mama! Tell Spout to be gentle with me!" 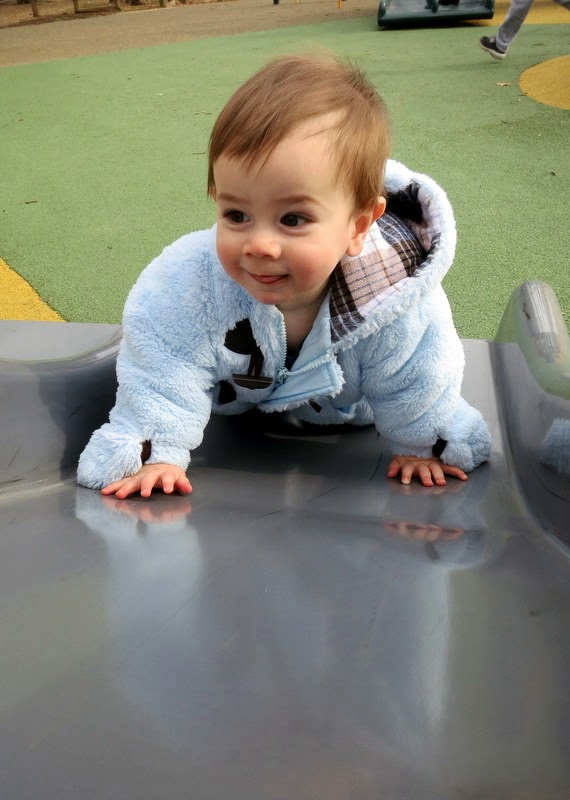 Posted by Peachy at 4:42 PM No comments: