1)  Fuzzy had another ear infection, and got used a nightly bribe of some chocolate-covered berries in order to take his disgusting antibiotic mixture.  He kept right on demanding these berries even after the medicine was done, so I tried linking them to other useful behavior.  The results were...less than exemplary: 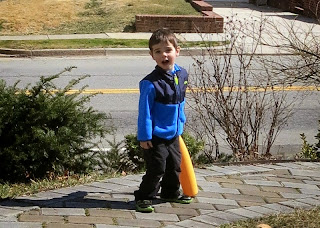 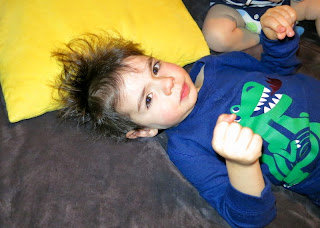 2)  Fuzzy is still obsessed with the Jack and the Beanstalk story, and has been requesting it almost every night for more than a month.  Consequently, I have several amusing anecdotes regarding our nightly telling.  Now that he's established the plot more firmly in his mind, he's asking slightly deeper questions, and requesting different versions of the story.  Thusly on two different nights, we had the following exchanges:

Me: Jack grabbed the goose and started to climb down the beanstalk.  Just then, the giant came out and started climbing after Jack..."
Night #1 Fuzzy:  "Dat giant not nice to chase childrens!  Why da giant climb after Jack?  He can go to da store an get another goose!  Da aminal store!"
Night #2 Fuzzy:  "No Mama, da giant not climb after Jack!"
Me:  "...Okay...just then, the giant looked out his window and saw Jack taking the goose.  He said 'Fe fi foe fum...I don't feel like going outside today.'"
Fuzzy:  Smiles and murmurs approval..."Mmmm hmmmm." 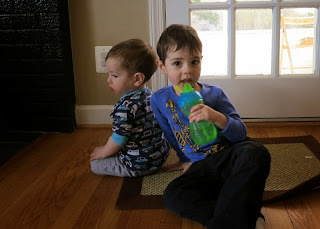 3)  Fuzzy also enjoys when he is introduced into the story, and Fuzz and Jack successfully bring back the goose together.   When I get to the end of this telling, he always smiles beatifically as I say that Jack's mama hugged and thanked the boys.  "We did a good job!" 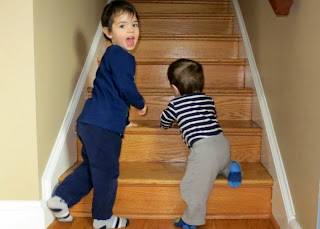 4)  Since I tell the story the same way every time, we've gotten into a routine where he finishes my sentences.  For example, I always say, "The beanstalk grew taller and taller, taller than a house, taller than a tree, taller than a mountain!"  And for a long time, Fuzzy was quite satisfied to say "house," "tree," and "mountain" at the appropriate spots.  If I forgot to pause and said the ending word, he would get quite upset.  "I taut I was gonna say dat!  Say it again!"

One night, instead of saying "house," he substituted "mushroom" (or mufwoom, in his pronunciation).  I laughed, and Fuzzy took this as his cue to repeat the joke...over and over and over.  Every sentence ended with muffwoom, all the way down to the goose laying a golden muffwoom. 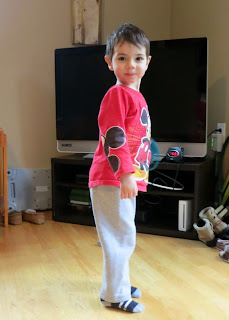 5)  As you might be noticing, Fuzzy is very into his routines.  Bedtime at our house goes like this - Mama gives him a bath, brings him downstairs, and he and Daddy read stories on the couch.  Then Mama is summoned back to take him and put him to bed.  Every night, The Pit asks Fuzzy if he can put him to bed instead, and every night, Fuzzy very emphatically says, "NO!"  When questioned why, he states, "Dat Mama's job!"  One night, The Pit decided to get more clarity, and asked what his own job was...Fuzz replied, "Youse job is taking me to pweeschool." * 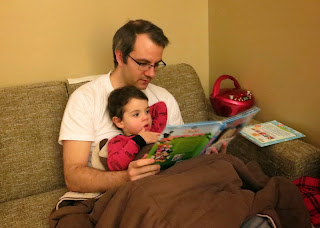 *Please note that Mama takes him to preschool 99% of the time.

6)  I was giving Fuzz and Sprout a bath at the same time, and Fuzzy was standing, such that his junk was directly in front of Sprout's face.  Sprout of course immediately focused on this new and interesting bit of anatomy, and grabbed at Fuzzy, pulling on his penis quite hard.  Fuzzy yelped in surprise, and I removed Sprout to the far end of the tub, where he commenced wailing about being denied this new toy.  Fuzz, in an uncharacteristic bit of generosity, looked at his baby brother and said, "It's okay Sprout, you can play with my penis!" 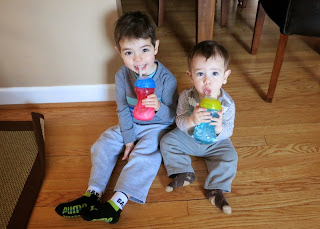 7)  A more common interaction between the boys took place on the playground:  Sprout crammed his mouth full of sand, so I took him away from sandbox, where Fuzzy was happily occupied with some trucks.  Fuzzy was not pleased by my absence, and ran right over to me.  "Mama, come play wit me!"  I explained that I couldn't, as Sprout was not to be trusted over there, and would eat more sand.    Fuzzy was undeterred.  He gestured vaguely at the far corner of the playground, a good distance away - "No Mama, come play wit me...you can put Sprout down over der!" 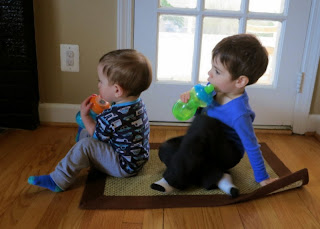 8)  From the backseat of the car, The Pit and I also overheard this exchange:

9)  The Pit and I, in a fit of sleepless delirium, where having an argument in the kitchen about who exactly had it worse the previous night.  Fuzzy did not like our raised voices, and immediately ran over to us from the living room.  "Stop doin' dat!!"
Posted by Peachy at 6:27 PM No comments: 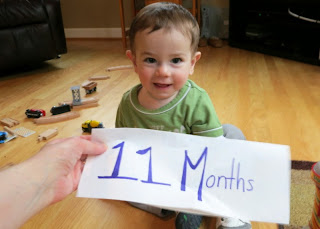 1)  Sprout got his second tooth at the beginning of the month, but has made no further progress.  This is a shame, since the kid wants to eat people food more than pretty much anything else in the world.  He's taken to loudly smacking his lips together when he's hungry - which is all the time, the child has an insatiable appetite. 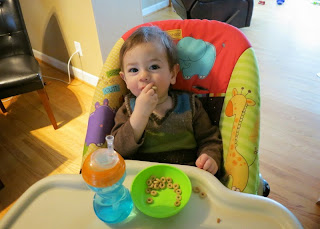 2)  I've sporadically been trying to teach Sprout a few signs - 'more,' 'milk,' 'water' - and for a while I was optimistic that the kid was a genius and picking up on the milk sign.  Then I realized that Sprout has determined that this sign means "I want."  Thus, he makes it whenever he wants anything, be it milk, food, a toy, or to be picked up.  This is less than useful in the communication department, as his previous sign for wanting something - whimpering - was perfectly sufficient in its vagueness. 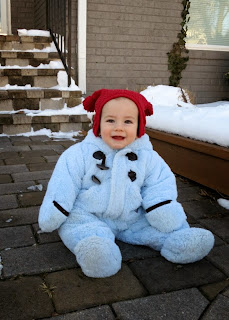 3)  This month the baby learned to push himself to a standing position without leaning on something.  He now grabs a toy, stands up, and then toddles around self-importantly.  The toys he loves best are all balls, and he will grab them, clutch them tightly while properly positioning himself, and then throw then down the stairs or across the room with great joy. 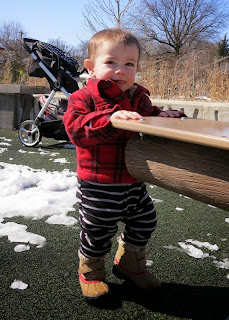 4)  In other mobility progress, this baby is a climber.  He loves to climb up on his little chair, and will stand there banging as high up on the wall as he can reach.  I've also witnessed him climbing up the side of his stroller to get a few cheerios I left in the kid's cup holder compartment. 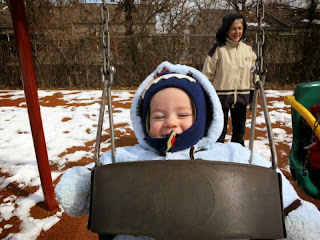 5)  Sprout is so good-natured, that even when he's feeling miserable, he manages to find a way to smile.  Case in point, he caught the latest cold Fuzzy brought home from preschool, and started running a fever.  Despite this, when he heard some music playing, he began bouncing up and down and waving his little fists around, dancing and grinning at us happily.  Of course, he did this when he was supposed to be settling down to sleep at night, but it was too cute to be grumpy about bedtime. 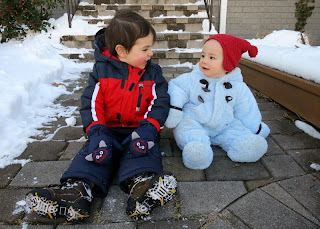 6)  Sprout is still mostly pointing vaguely upward, but now jabs with more emphasis, and sometimes directs his finger ever so slightly horizontal, enabling us to better guess his meaning. 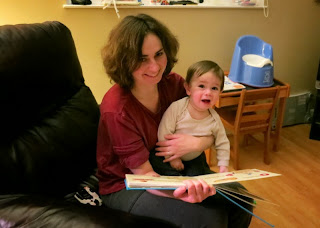 7)  The baby has started sharing his food, carefully taking masticated bits out of his mouth and putting them in ours, then grinning broadly at his own cleverness. 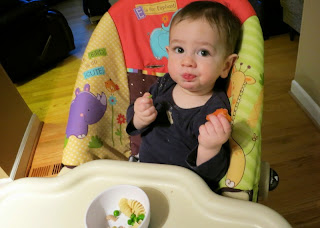 8)  Sprout used to try to eat tissues on the floor - now he picks them up and wipes the floor with them carefully.  He is also interested in the broom, and will happily drag it about while 'cleaning.' 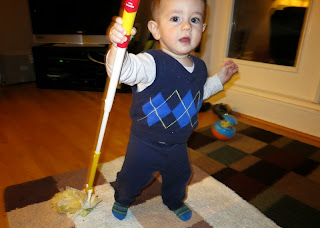