1)  Potty training progress remains approximately the same as last month.  The other day, I came outside, where Fuzzy was playing next to a large container we've designated as a sandbox.  After a little while I started smelling something...off.  I crouched down, and sure enough, there was a suspiciously wet patch of sand.  Knowing that The Pit had just been out here with Fuzzy, I started the following line of questioning: 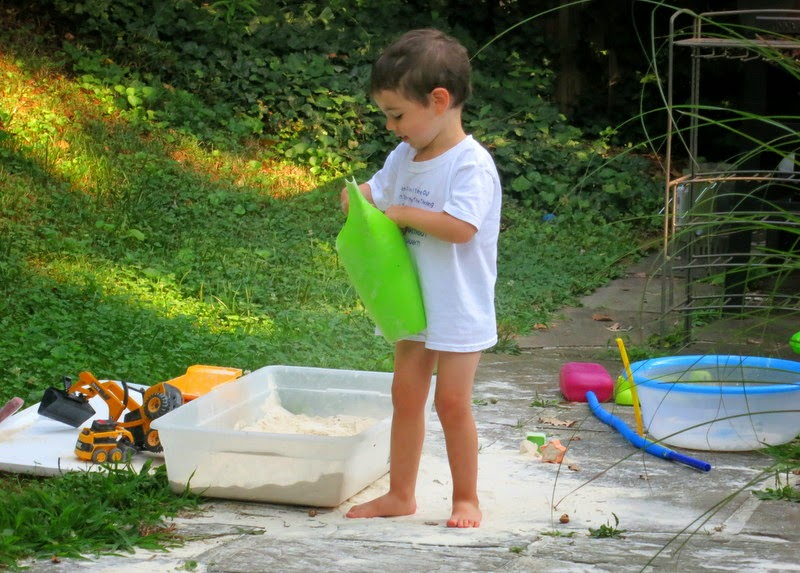 3)  Similarly, "join me" is now a favorite phrase: "Join me Mama, join me!" as he runs naked in circles around his room, pretending to be an airplane.  "Join me, Mama!" as he heads down to play in the basement.  "Come onnnnnn Mama, basement is fun!"  Sadly, this last was during a day when I was trying to work from home...needless to say, little work was actually accomplished. 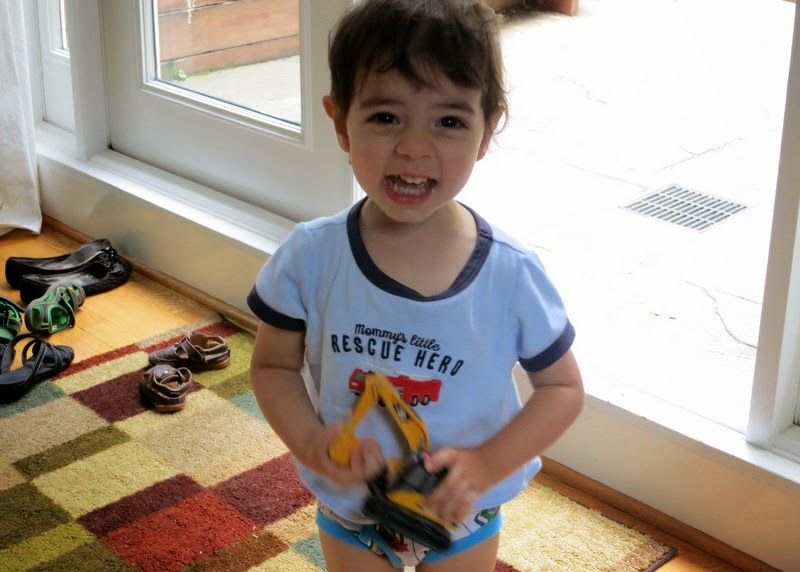 4)  My mother was visiting us, and her back started acting up.  I made an appointment for her with the chiropractor.  As she was going out the door, Fuzzy perked up, and said "Where Baba goin?"  I explained that Baba was going to the doctor because her back hurt, and that the doctor would make her feel better...at which point Fuzzy clutched his back with both hands, bent over like an old man, and said "Oh oh oh, my back hoyts! I need to go to the doctor!" 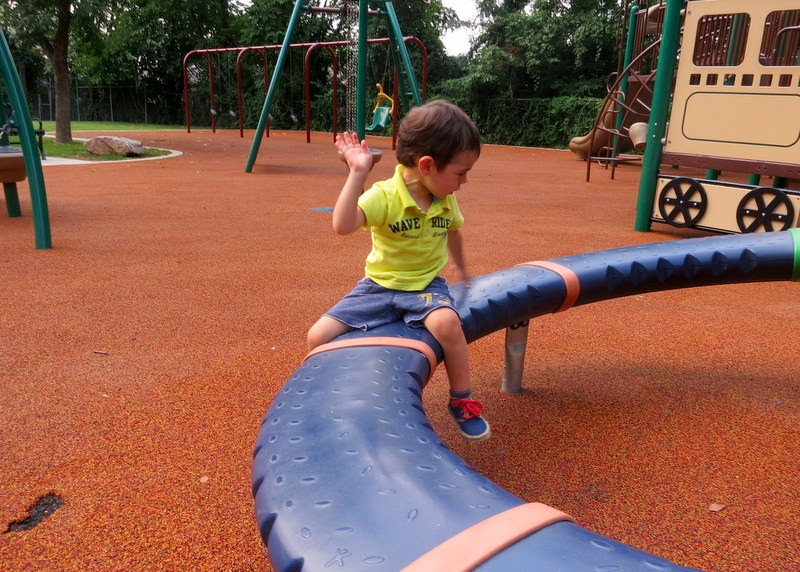 5)  We left the lid off the previously mentioned sandbox, and of course, that night it rained, turning the box into essentially a container of cloudy mud.  The child who refuses to put his face into the clean bathtub water took to this immediately, coating himself head to toe.  He even dipped his forehead in it, allowing his bangs to drip gooey sand down his face.  Then he turned to me: "Let's go show Baba how hansome Fizz is!"

6)  On August 17th, Fuzzy, completely unprompted, turned to me and said "I wuv you...and Sprout wuvs you too!" Since then, he has periodically repeated these sentiments to both The Pit and I, effectively pulling out our hearts and smushing them. 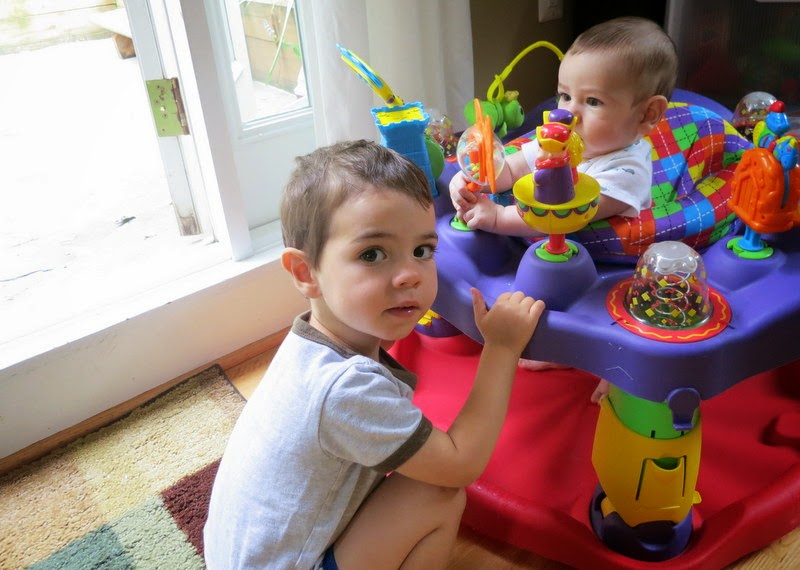 7) The other day Fuzzy wasn't feeling well.  Whenever this happens, he demands to a) hold his comfort toy - formerly called "Any Baby" and now more specifically christened "Dot Baby," and b) be rocked (or wocked, as he says).  On this day, while rocking him, I also started massaging his back.  He quite liked it, and now requires to be "assaged" periodically.  If I stop before he's done, I get ordered to "Assage me again! Again Mama, assage me again!"

8)  We finally converted Fuzzy's crib into a toddler bed.  When shown the results, Fuzzy climbed in by himself, turned to us with a shining face, and said "I like my new bed!  It just like Mama and Daddy, I like it!" 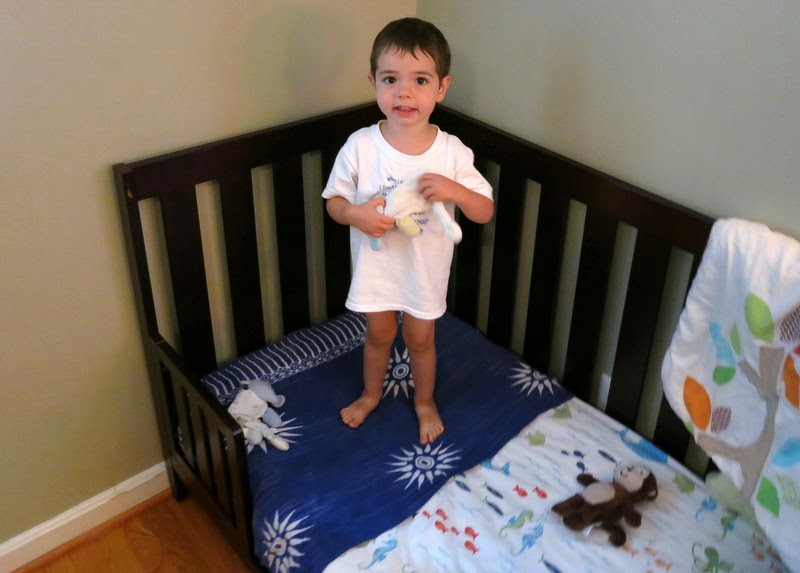 9)  We enrolled Fuzzy in two-day/week preschool, and two weeks before classes started, the school held a picnic to get the kids familiarized with the setting.  They asked everyone to bring some sort of snack, so the day before Fuzzy personally selected a box of crackers at the grocery store.

Of course, as soon as we got home, he also wanted to eat his box of crackers.  I explained that these were special crackers, and that we had to take them to preschool the next day.  Clearly, this made a big impression, because upon waking up the following morning, Fuzzy was very excited.  The first thing he said to me was, "Mama! We goin to take special cackers to pweeschool!!"  Then, in the car on the way to the picnic, the crackers were once again the only topic of conversation.

Upon arriving at the picnic, Fuzzy immediately tore into the box, then bounced around the playground for a bit, helpfully pointing out spiders to terrified children and stealing food from their resulting unattended plates. 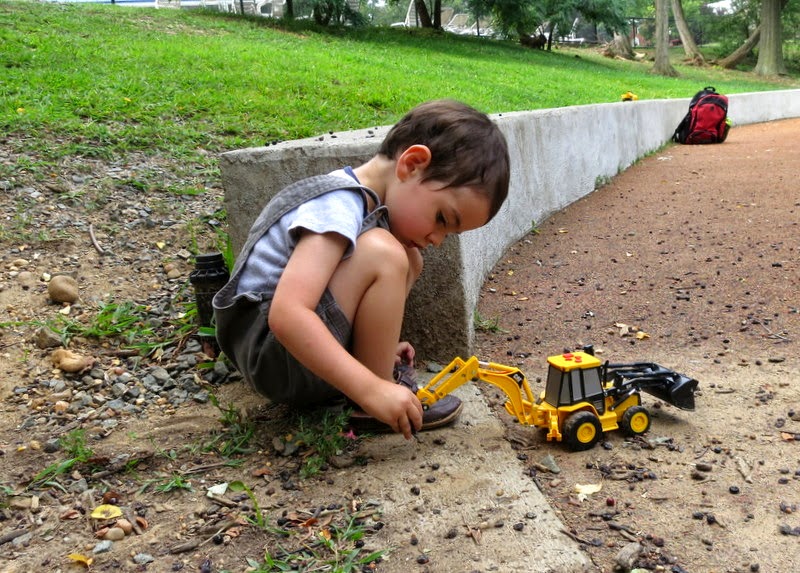 Posted by Peachy at 3:45 PM No comments: 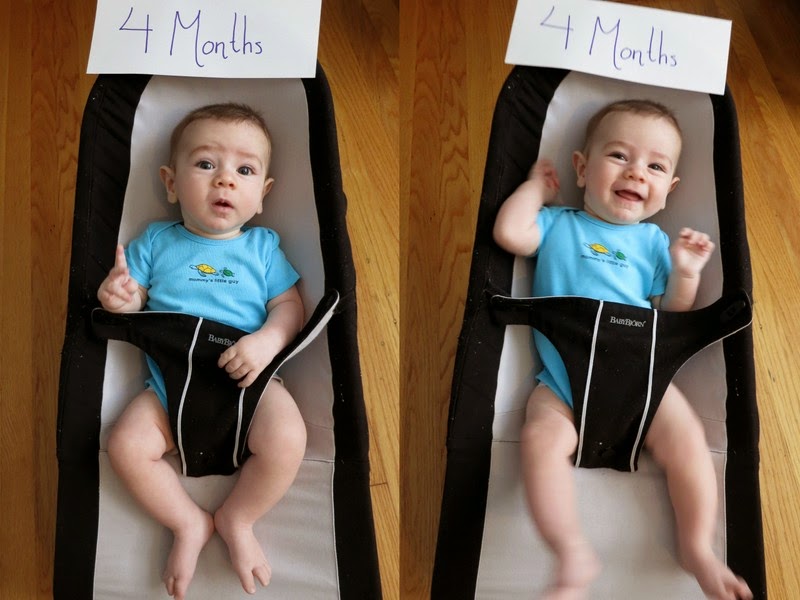 1)  Baby Sprout is now rolling over from his stomach to his back unassisted.  However, he continues to prefer standing.  When he's being held, his very favorite new trick is clutching a bundle of hair tightly in his tiny fists, and trying to eat it before it gets pulled away from him. 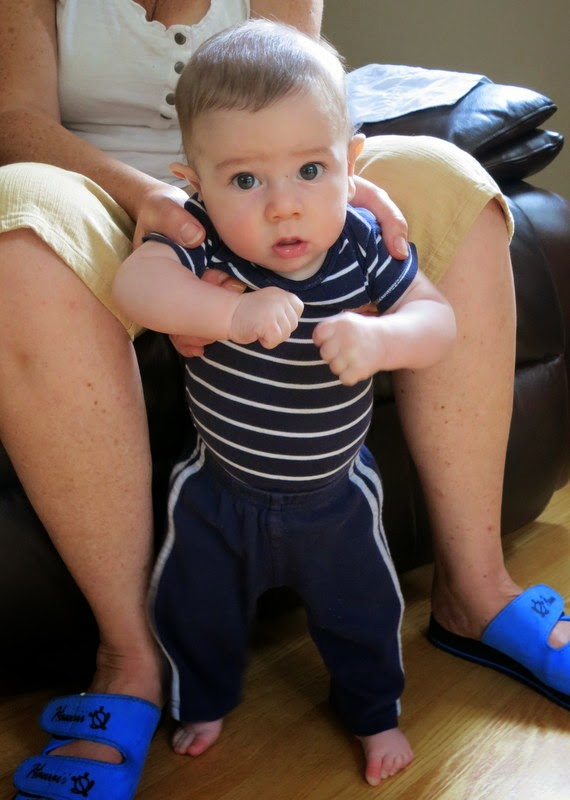 2)  After learning to stuff his fist in his mouth last month, in the last few weeks he's refined his technique, and now energetically sucks on a few fingers at a time.  Periodically the sucking gets to be more vigorous than usual, and he will gag himself. 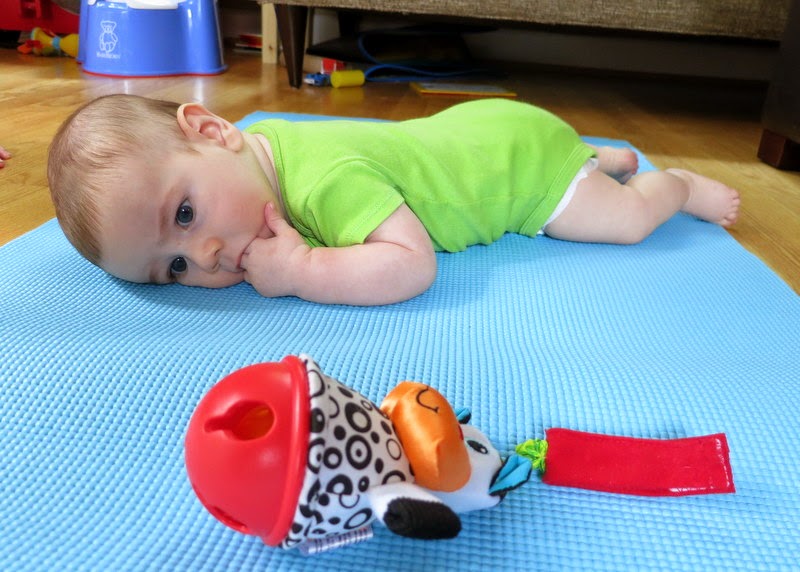 3)  Sprout's hand-eye coordination is much improved, and he grabs at things much better than before.  Not only can he actually hold on to an object for long enough to bring it to his mouth, but he can also reach out and pull said object to him if it's placed anywhere in his vicinity.  However, he isn't particularly loyal to any one toy, and mostly seems to enjoy being handed every available option in rapid succession.  He will feel the offering to determine if it shakes, rattles, or crinkles, then taste the object in question for a few minutes at most.  Then he gets bored, and turns to you with big eyes and plaintive little wails, demanding something else to entertain him. 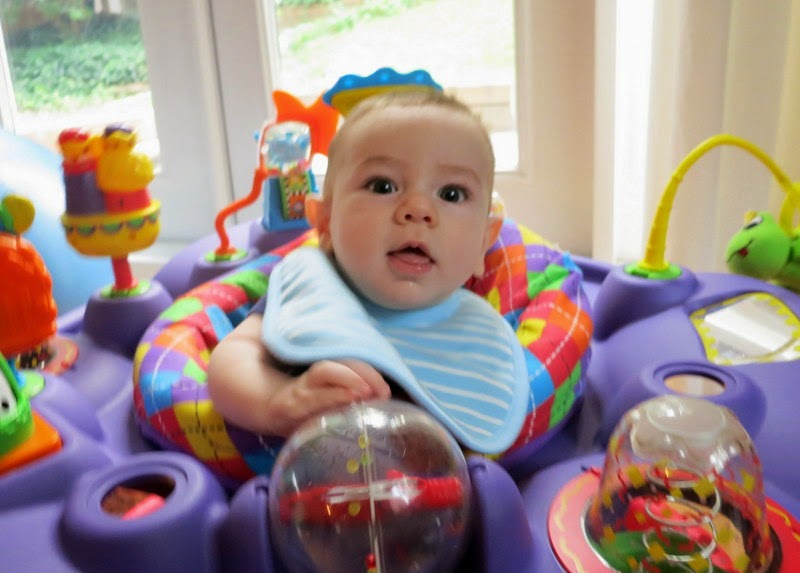 4)  When Fuzzy was about 6 months old, his aunt sent him a little car walker, which got much use until he actually learned to walk by himself.  We placed Sprout in it quite a bit earlier than his brother, but he also receives significant enjoyment from being upright and self-propelled.  Although in his case, "self-propelled" might be a little generous.  His teensy tiny toes can just reach the ground, and he uses them to hop forward, while at the same time throwing both arms in the air frantically to propel himself as much as possible. 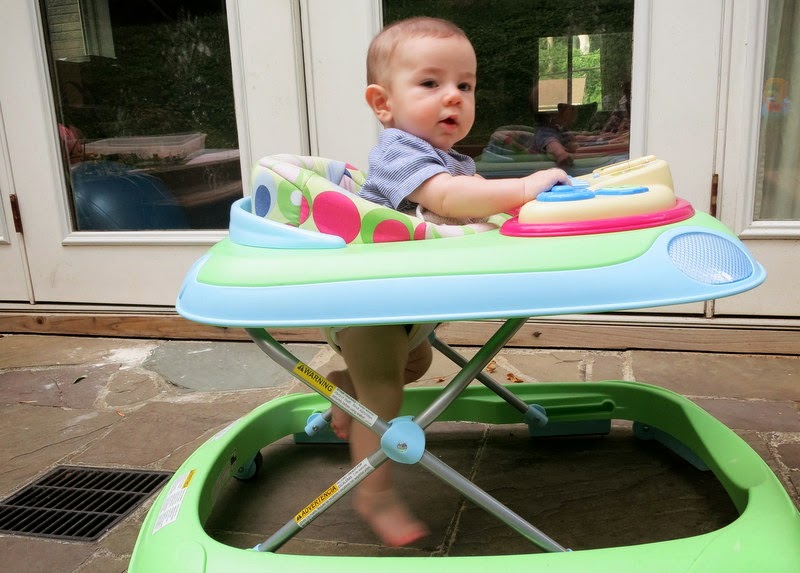 5)  We have come up to the screeching milestone, when sweet burbling and quiet spit blowing turned overnight into sounds of delight loud enough to wake the dead.  Thankfully, the baby's banshee wailing period only lasted about two weeks, and he has, for the most part, subsided back into small squeaks of pleasure and occasional bear grunts of distress. 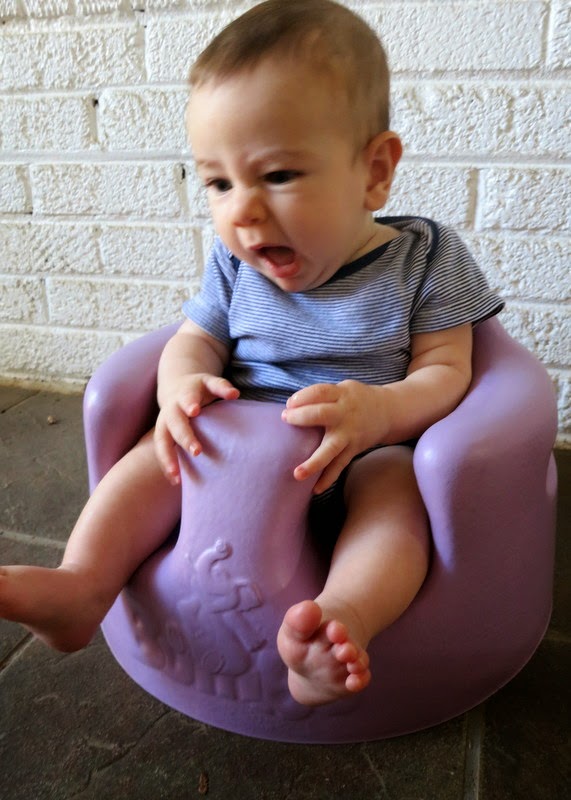 6) Bath-time continues to be Sprout's very favorite time, when he turns the full force of his toothless smile upon a captive audience.  For his first few months of life, the baby expressed his boundless enjoyment of the tub by frantically churning his arms and legs back and forth, generating tidal waves and splashing for his own enjoyment.  Now he instead tries to suck at the fingers and washcloth cleaning him.  The tightness of his grip on said washcloth seems to indicate the following train of thought: "Mmmm, most delicious washcloth...whyfore can I not have it always?" 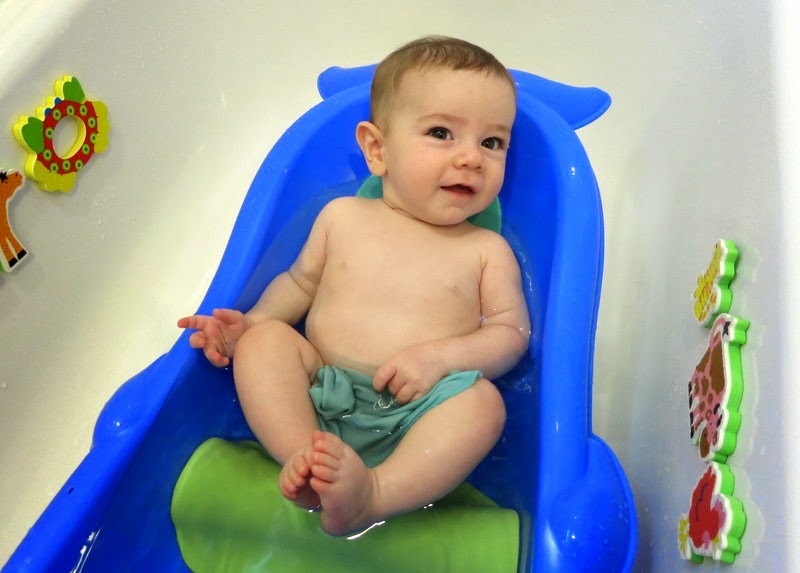