Fuzzy had a momentous 14th week of life.

1)  His new nanny - we'll call her Maya - started work this week, and lo, it turns out she is a miracle worker.  On her very first day, she and my mother managed to distract Fuzzy long enough for him to consume half an ounce of milk from a bottle.  Granted, this whole process took almost an hour, required two grown women, two musical toys, an exercise ball, and a plethora of distracting tinkling, squeaking, and rattling objects - but still!  Definite progress from no bottle at all.

2)  Fuzz also showed some motor development progression, as he flipped from his back to his stomach in a fit of pique.  This was during a middle-of-the-night feeding and diaper changing, so I was the only witness, and so far he hasn't repeated this trick for anyone else.  I'm pretty certain it happened though, and wasn't just a sleepless hallucination on my part.

3)  Finally, the baby has finally discovered his feet.  He's certainly seen them before, and even stared for lengthy periods of time, but this week he figured out that those things at the bottom of his body can be fun toys.  He now grabs them when laying down and purposefully splashes with them in the tub.  This discovery is a mixed blessing for us adults - on the one hand, he has a good object of distraction when no toys are available.  On the other hand, diaper changing is significantly harder now, as he resembles nothing so much as rolly-polly bug who refuses to straighten out. 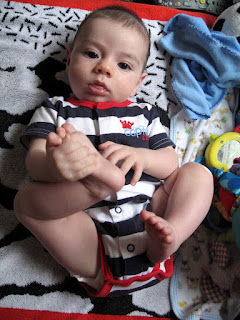 Posted by Peachy at 4:51 PM No comments:

Between his twelfth and thirteenth week, the Fuzz has developed some new tricks:

1)  Blowing bubbles.  Whereas he used to communicate in several adorable coos, this new milestone means that Fuzzy basically now stares at us while gurgling and drooling excessively.  His squeals have gotten higher pitched too, and he somehow manages to convey both whining and demanding tones, especially when he's hungry.  The Pit and I decided his new conversational language resembles nothing so much as pterodactyl cries.  If chatting with the baby were plotted against our enjoyment, I would say this week brought a definite dip.

2)  Playing peek-a-boo. To make up for talking through a mouth full of spit, on his three-month birthday Fuzzy showed my mom and I something totally new.  I was holding him in the crook of my arm with my mom sitting next to us, and Fuzzy decided he would play a game.  He turned to my mom, gave her a big grin, watched her attentively for a second, and then turned his head to hide in my arm.  He let a few seconds go by, and then he flipped over to my mom again with a delighted look on his face.  He did this over and over and over again, clearly showing off how good he was at concealment.  My mom tried doing peek-a-boo back by hiding her face in her hands, but Fuzzy was clearly more interested in hiding than seeking.

3)  Rolling over.  Fuzzy has generally been more cranky this week, which means his usual response to tummy time was an indignant wail.  However, we did manage to get him to lay on his stomach a few times, and were  rewarded with the baby suddenly rolling over onto his back.  At last count, he had done this four times with a completely nonchalant air, looking at us with vague confusion when we erupted into cheers and clapping.  He hasn't rolled over from his back to his stomach yet, but has gotten all the way to his side while reaching for a toy. 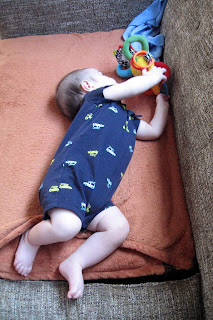 4) Not sleeping.  As mentioned above, this has not been Fuzzy's finest week.  The last two days in particular have been brutal, with demands to be fed every two hours, and sudden hunger pangs that bring him screaming out of sound sleep and groping for a boob without ever opening his eyes.  I would say the following picture really summarizes all of our feelings about the situation: 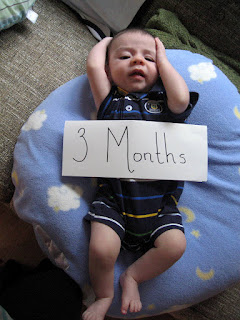 At 12 weeks, Fuzzy is displaying a remarkable progression in hand-eye coordination.  Three weeks ago he was batting at toys, grabbing them sporadically, and mostly unsuccessfully attempting to shove them in his mouth.  As the weeks passed, Fuzz began clenching his fists, bringing them up to his face, and then studying them in crossed-eye concentration.  Eventually he would try to cram one of them in his mouth, to better appreciate its aerodynamic qualities.

Apparently all this studying paid off, because he became better and better at toy grabbing.  With his 3rd month half-over, he can take just about any toy dangled in front of him, or placed off to the side, determinedly clench it in his fat little fingers, wave it around for a bit, and then in a very satisfying finale, bring it to his mouth for a taste.

He's also starting to show us desires (desires other than food or sleep, that is) - if he's playing with a toy and we take it away, he will first look around for it, and if it's no longer within reach, he will look at us accusingly and start making half-crying half-whining noises until it is returned to his grasp.  This new-found toy fascination means that we can leave him to play alone for longer and longer periods of time, freeing us up for certain critically important tasks.*

* Using the restroom and showering are important tasks at the top of this list.

This next triumph will be difficult to explain for the American readers, but Russians have this playful stretching/ massaging exercise for children, typically done upon waking.  It's pronounced paty-goose-ing-key, but all as one word.  The way it works is that the adult puts their hands on either side of the kid's head, and then runs their hands all the way down the sides of the body, stretching out the arms and legs as they go, and all the while saying "Patygoosingkey!  Patygoosingkey!"  I distinctly remember my grandfather doing this with me when I was little, and loving it.

Well, upon first meeting Fuzz, my grandfather started doing this to him.  The really amazing part is not that the kid loved it, but how quickly he learned it.  After spending a few hours with my grandpa, he's got the routine down.  I can start saying the words and running my hands down his arms, and by the time I get to his chunky thighs, he's straightened out his legs all by himself, and is grinning at me while assuming a classic toy soldier position. 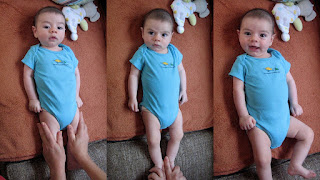 The Pit is always chastising me for wandering around the house semi-nude, or, depending on the occasion, completely starkers.  So you can imagine my delight, when on this trip to visit my family, I came downstairs in the morning to the following tableau:

The Pit, standing at the kitchen island with my dad, having breakfast.  The Pit dressed normally, but my father wearing only bright green speedo underwear and a rather small short-sleeved collared shirt, which I'm fairly certain was worn only for a place to put his cigarettes.

Why was this considered appropriate breakfast attire?  Why didn't he wear shorts instead of a shirt if he needed pockets?  These are all excellent questions, but I do not have answers for you.  All I know is that The Pit should be grateful that the only Peachy family member he has to regularly see half-naked at breakfast is me.
Posted by Peachy at 12:47 AM 1 comment: