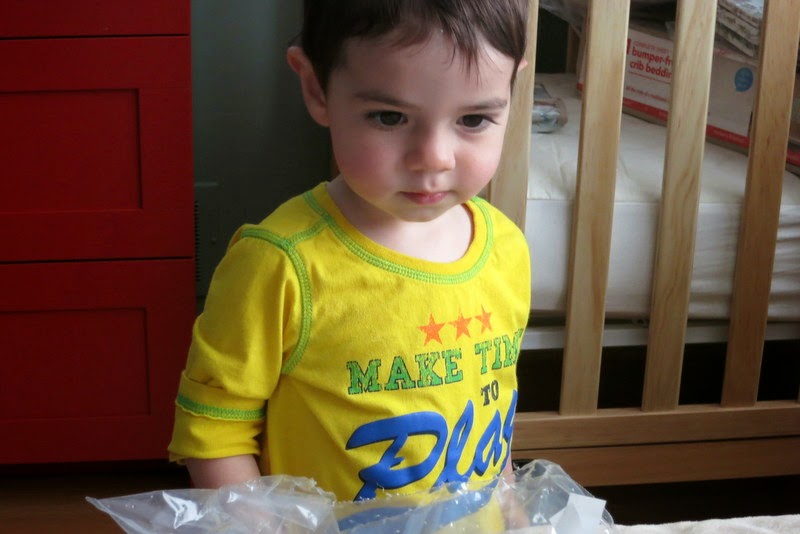 1)  Fuzzy demonstrated his ingenuity at the beginning of the month.  He wanted to turn the light in the basement on by himself, and I suggested he stand on a box to do it.  He cocked his head, having never considered this option before, and then went and dragged a plastic bin over to the light switch, climbed on, and flipped the light back and forth in ecstasy.  Then he was given his usual evening bottle of milk, which he promptly dropped in his excitement.  A little bit of milk spilled, and he noticed.

Answering his own question, he got off the bin, pushed it over to the bookshelf, climbed up, pulled a single tissue from the kleenex box I hid from him up there, and then went to clean up the milk.  Because apparently this was a fun activity, he then proceeded to repeat it about 10 times, each time saying "One more!" as he got down a tissue. 2)  In a similar vein, he also drank from Daddy's bottle of juice - taking one sip at a time, screwing in the cap, then saying "Little more" and opening the cap again.  Repeat about 30 times - the fun part was that we were Skyping with the grandparents at the time, so they witnessed this for about 10 minutes.

3)  As chronicled in the last posting, Fuzzy has been helping Daddy fix things around the house recently.  Shortly before Sprout's arrival, we went shopping at Ikea, and got not only a dresser for the baby's room, but also a toy toolset for Fuzzy.  He very proudly wielded his own hammer, screwdriver, and wrench as he helped build the dresser, talking about being a "big bother" when the baby came. 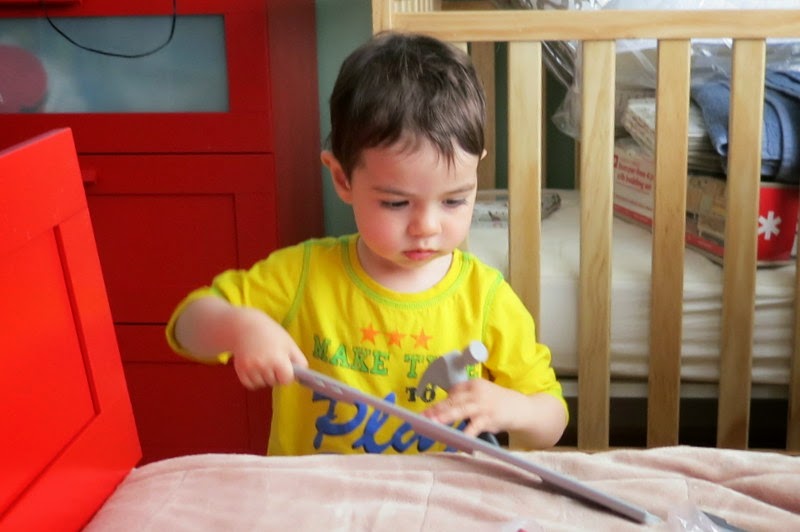 4)  As I believe I've mentioned before, Fuzzy is particularly sensitive to loud, unexplained noises.  Hearing any type of bang, buzzing, whistling, bumping, etc., he will run to my leg, hug it tight in terror, and say "Noize?" Sometimes, this is followed up with a quivering "Thunda boom?" because he saw two separate episodes - one of Caillou, and one of Peppa Pig, where the kids are scared of thunder storms.  He himself has not yet experienced a storm, but we live in fear of the day.

Anyway, when we explain what the noize is, Fuzzy always calms down.  Often, the explanation is something along the lines of: just Daddy/Mama/Maya walking/washing dishes/etc. upstairs/downstairs.  Apparently this narrative has stuck, because the other day, Fuzzy ran to me - "Noize?" he said, and then followed it up with his own explanation: "Jus Daddy downsairs fixin stuff." 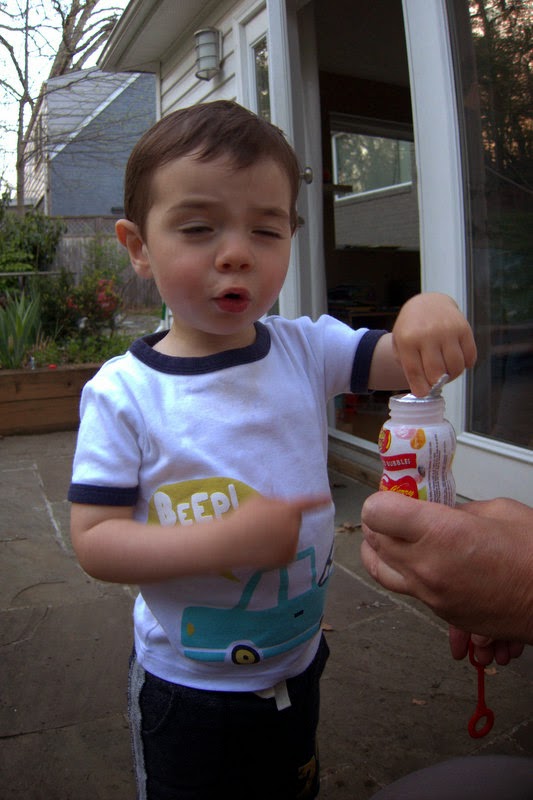 5)  Fuzzy has expanded his song repertoire.  When asked to sing a song a few weeks ago, he burst out with: "Twinkle lit sta...goon goon GAAAAAAAAA!" - apparently because he couldn't remember the rest of the lyrics.  Then, later in the month, I heard him at top volume, singing to himself at nap time - "TWINKLE TWINKLE LIT STA, HOW WONDA WHAT ARE."  Personally, I found the rendition less than soothing, but what the hell do I know.

6)  Fuzz is picking up random words here and there, and at this point, I have no idea where he gets any particular thing.  Case in point - during bath time a few days ago, he asked for the faucet to be turned on, and then requested his cup.  When he drank deep, I asked if the water was good.  "Deeeeelicious!" the baby replied. 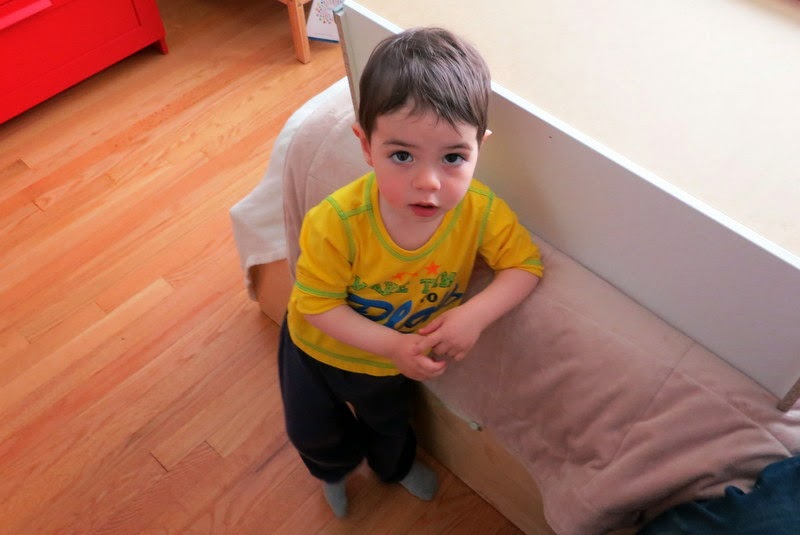 7)  We've been trying to teach Fuzz to say 'please' and 'thank you' at appropriate moments.  Although he figured out 'peas' very fast, until a little while ago, he really had to be prompted every time for the thank you part.  The other day though, he asked for some toast at breakfast, and when I handed it to him, completely unprompted, he said "Fanks Mama." 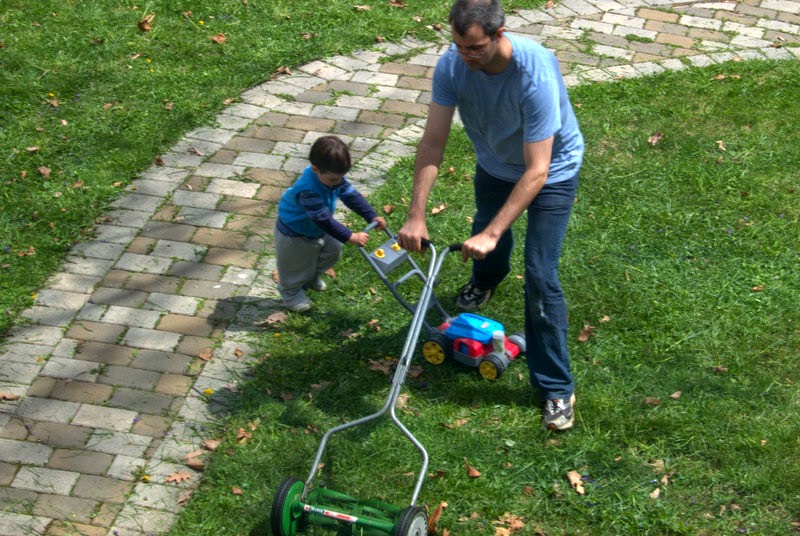 8)  I've been writing these notes in more or less chronological order, so only at the end of the list are we getting to the most significant event of the month - Sprout's arrival.  Fuzzy's reaction to the birth of his baby brother is better than anything I could have imagined.  He first laid eyes on the baby when The Pit brought him for a visit to the hospital, and he grinned hugely, pointed to the bassinet, and yelled "Baby!!" excitedly.  When informed that the baby was named Sprout, he asked, "Fizz kiss baby Fpout?"

After he was afforded the opportunity, he kept asking to do it again.  When it was time to go, he cried bitter tears, and as The Pit carried him out of the room, I could hear the yelling down the hall "NO! NO! NO! FIZZ KISS BABY FPOUT MORE!" 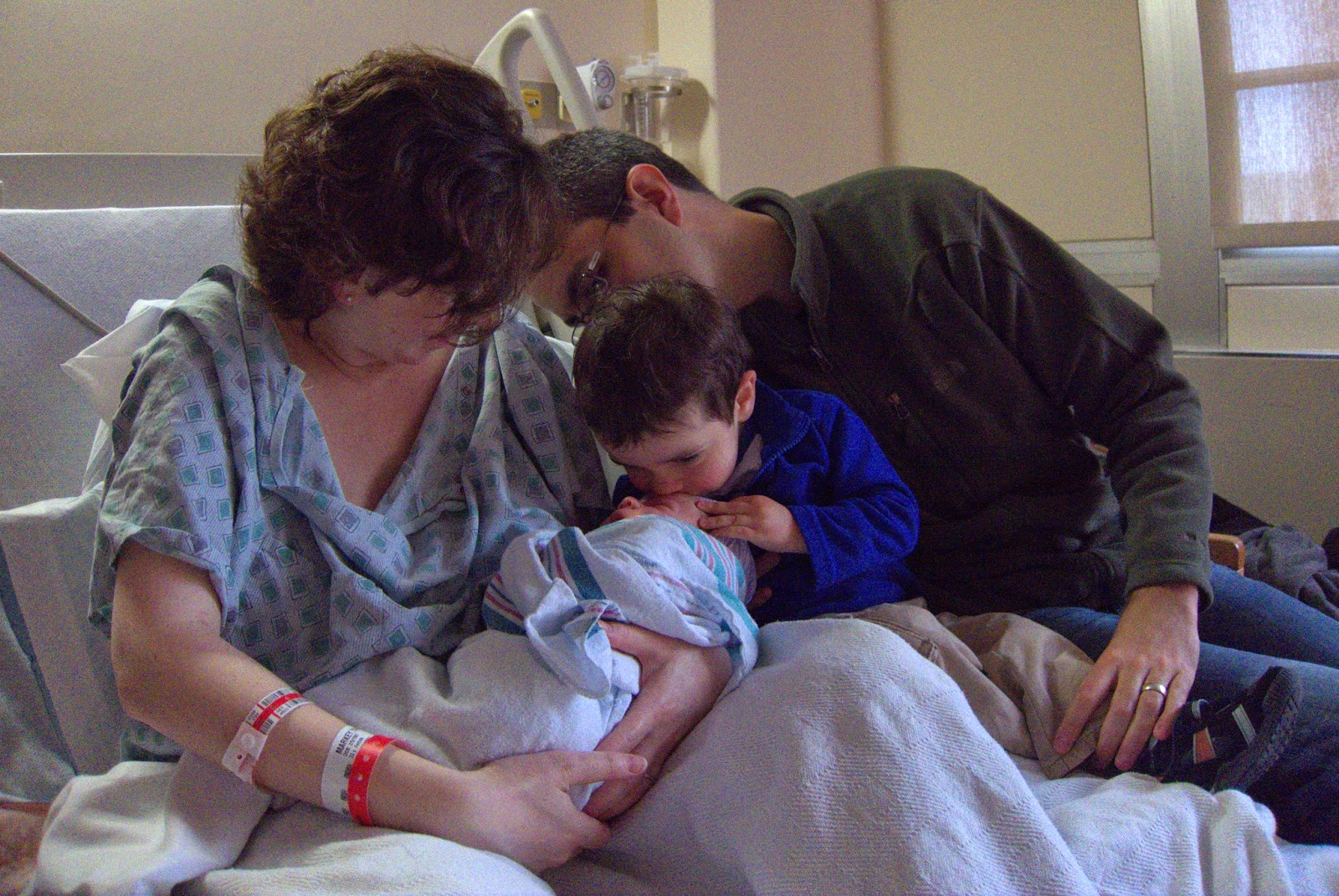 9)  The day after I came home from the hospital, The Pit took Fuzzy on a walk so I could feed the baby in peace.  As they approached the house, I could hear Fuzzy excitedly yelling something.  When they opened the front door, this resolved into "MAMA! MAMA! Fizz bought Mama flowers!!"  And indeed, he had.  He clambered up the stairs, and then entered my room triumphantly, clutching two wilted and rather smushed dandelions in his little fist.  These he proudly presented to me, making Mama tear up just a tiny bit.

10)  Fuzzy has two comfort animals - they are essentially identical elephants, although he greatly prefers one to the other.  They do not have names, per se, but are instead referred to as "Any Baby" for the favorite, and "That Baby" for the other.  It is a measure of Fuzzy's devotion to his new sibling that, upon seeing the baby laying there sleeping, he grabbed an extra blanket, put it on top of Sprout, and then followed this up by placing Any Baby next to his head. 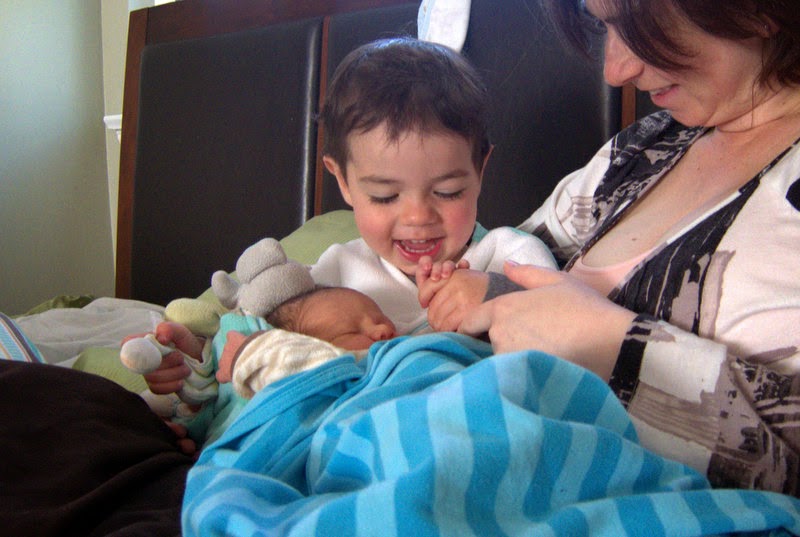 11)  A few days ago, Fuzzy saw a cartoon featuring a marching band.  Now he grabs his toy frying pan and spatula, starts banging them together, and marches around the room, repeating "Fizz MACHING!" over and over.  Usually our applause is not enough for him, and he demands that we too stand and march behind him.  Apparently he is already wise enough to know that adults cheat, because as he marches, every few seconds he will glance backward to make sure we are still with him.

12)  In a very recent development, Fuzzy will return from walks with shouts to whichever parent wasn't with him - "Mummy, mummy!! Fizz saw duck!!"  So far, I have been informed of the existence of ducks, flowers, bees, and ants.  It's super cute how excited he is to share.

13)  For whatever reason, Fuzzy has taken to calling me "Mummy" recently - not all the time, but his usual call of "Mama, Mama!" now goes something like: "Mama! Mama! Mummy! Mama!"

In other language developments, as noted by his pronunciation of Sprout, he now turns 's' into 'f' - although once again, not in any sort of consistent manner.  But sunglasses become fungasses, shoulders become folders, and upsidedown is upfidedon.  For our final picture, here is little bunny exhausted from too much playing outfide: 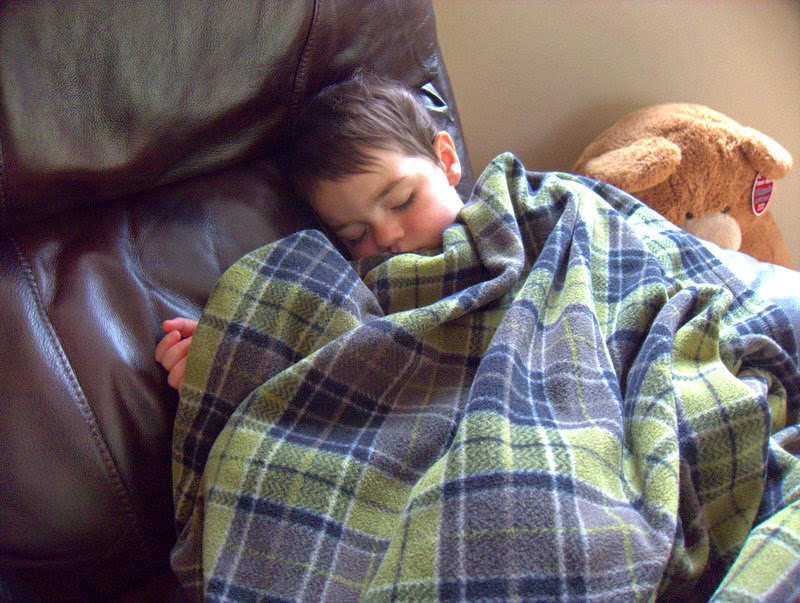 Having a second child is a revelation in differences.

1)  To date, Little Sprout is a much more mellow baby, possibly because he does not insist on keeping all his precious burps inside.  Unlike his big brother, he readily belches and spits up when turned upright, and then happily goes back to sleep. 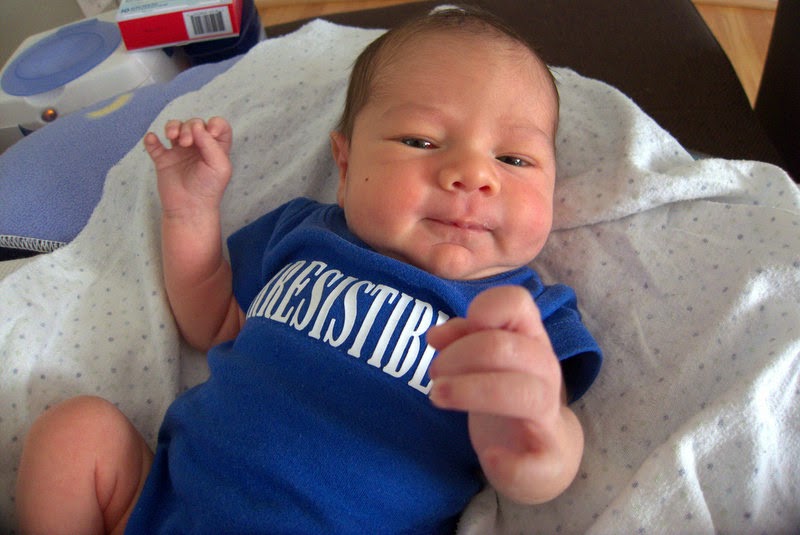 2)  The sleeping - oh my god, the sleeping.  I seem to remember Fuzzy being up constantly at this age, looking around, making a fuss, and insistently demanding to be fed and/or held.  Baby Sprout occasionally has intervals where he feeds every two hours, but for the most part, he goes about four before making his presence known.  In the intervals, he lays happily on his infant pillow and sleeps.  Even loud noises from his big brother, along with the occasional poke and/or kiss, fail to disturb him. 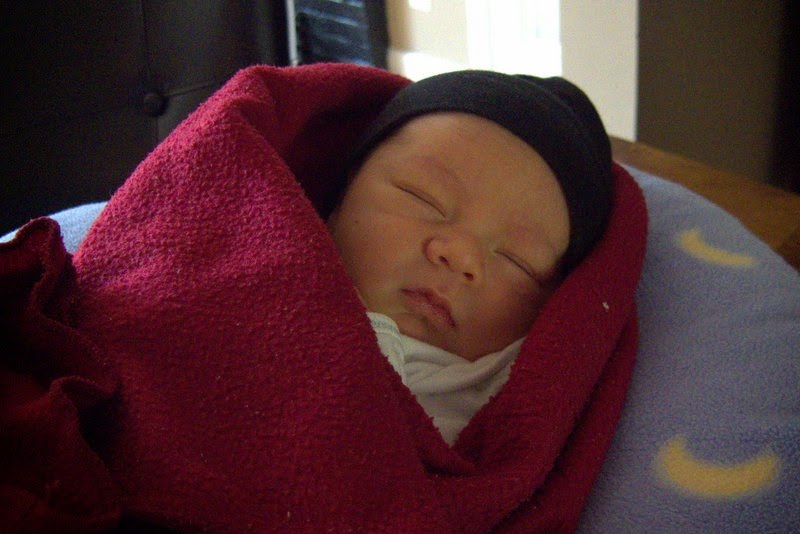 3)  On the downside, once he wakes up, he is a very slllloooowww eater.  He'll latch on for a few minutes, then pull off, and stare at the nipple in amazement for a bit.  Then he'll want to be burped.  Then he'll nap for a few minutes, and the cycle will repeat.  It can take over an hour for him to finally get full enough to really get back to serious napping.  This is all fine and dandy during the day, but can get rather frustrating at night, when all I want is to feed him, change him, and get back to sleep myself. 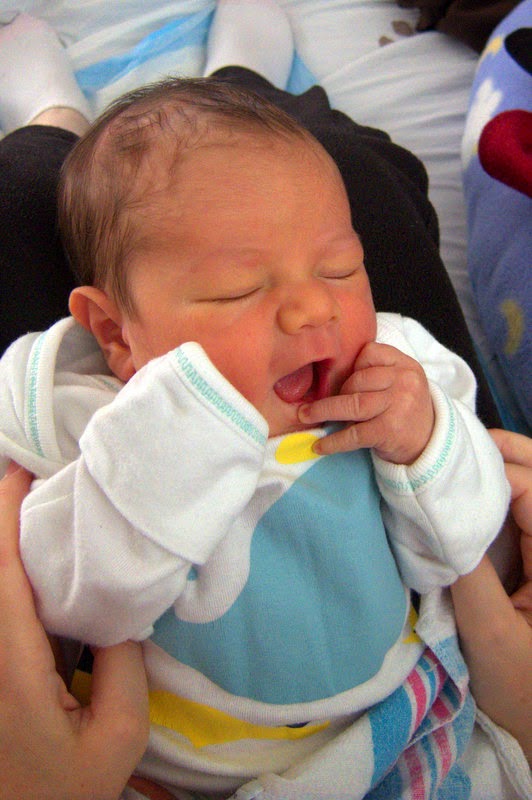 4)  And let us not forget the peeing.  By the time he was a week old, Fuzzy had persisted until he peed on every single member of the household.  Sprout has been much better behaved, always waiting until a diaper is back on to let loose. 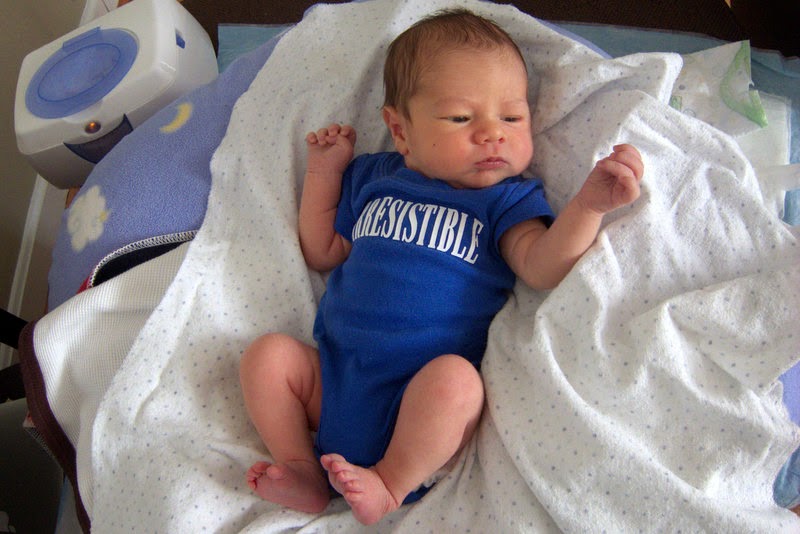 Posted by Peachy at 9:16 PM No comments:

Introducing the latest member of the Peachy family:  little Sprout, who, due to some genetic quirk I blame entirely on The Pit's side, appears just a tad bit Asian.

Here he is, as a happy Buddha: 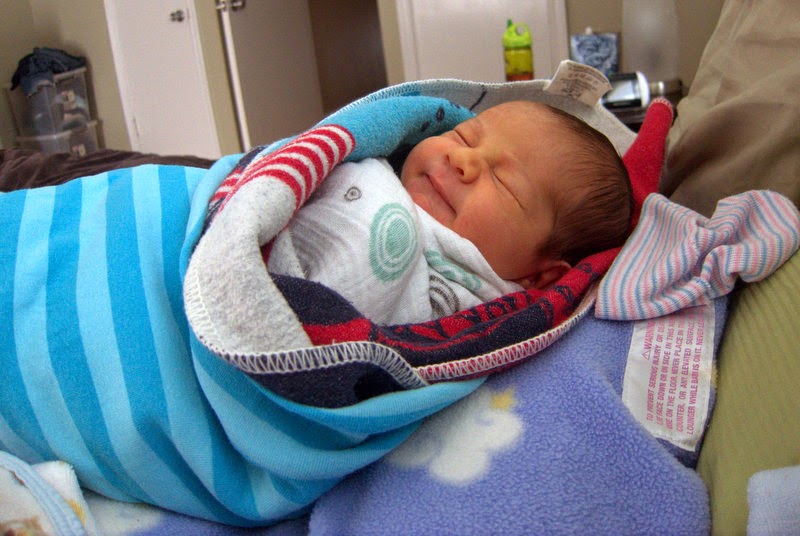 And here, as a North Korean dictator: 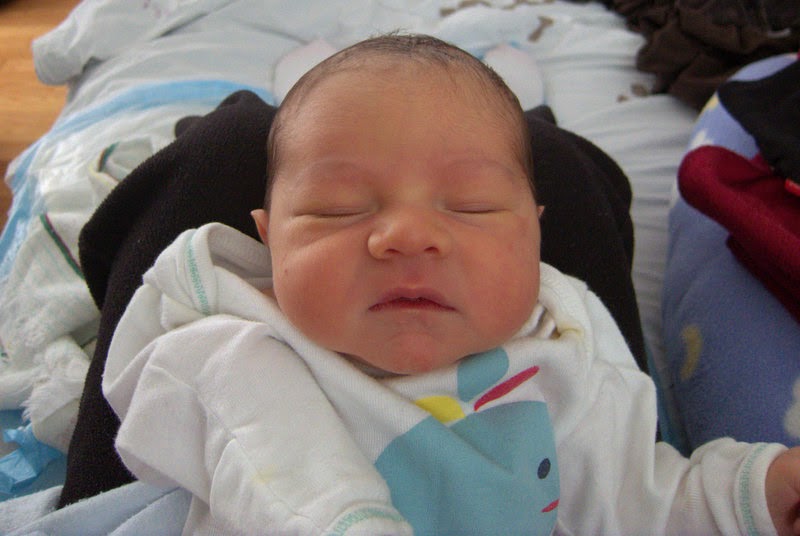