Our toddler is developing into a real person.

1)  This month, he started saying 'I love you'  ... although mostly only when coached, and not as an independent thought.  However, after a few weeks of coaching, we did have the following exchange, after we heard sirens and I ran him through the entire house in time for him to see a fire truck go by out the front window. 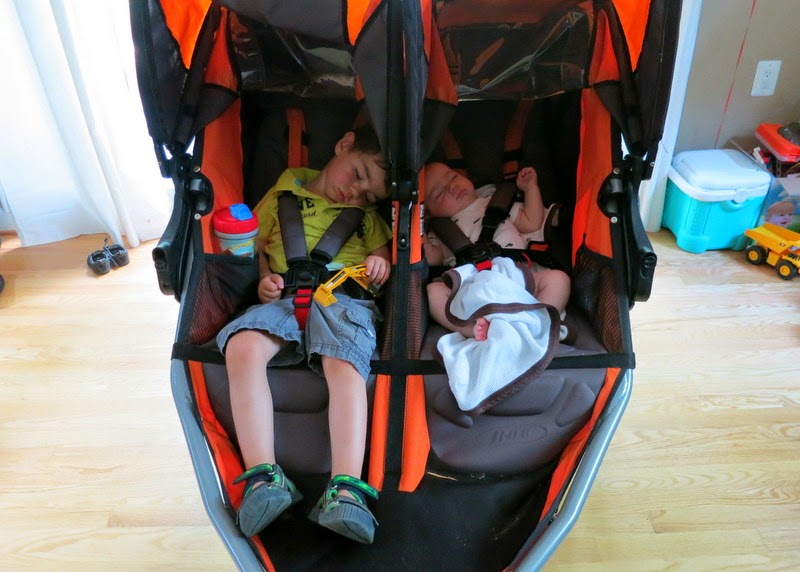 2)  I finally coaxed the child into coming to the public pool near our house.  This took some doing, as when we originally asked him if he wanted to go, Fuzzy said "No! Dat pool too wet!"

However, after pointing out that his hero Caillou had been to a pool, Fuzz finally consented.  The pool we selected has a little wading area for toddlers, and Fuzzy took a liking to it...all except for  two plastic circles on the bottom.  As I was unsure of their function when he questioned me, I made up a lie on the spot, and confidently told him they were drains.  He then proceeded to be terrified of them for several visits, going so far as to warn the other children to stay away.  "Be careful boy!" he would yell whenever one of the other kids ventured too near the drains.

After our fourth visit, he was a little less frightened of the drains, and a lot more willing to independently crawl around in the baby pool.  "I swimmin!  Swimmin is fun!!  I love swimmin!" he screamed. 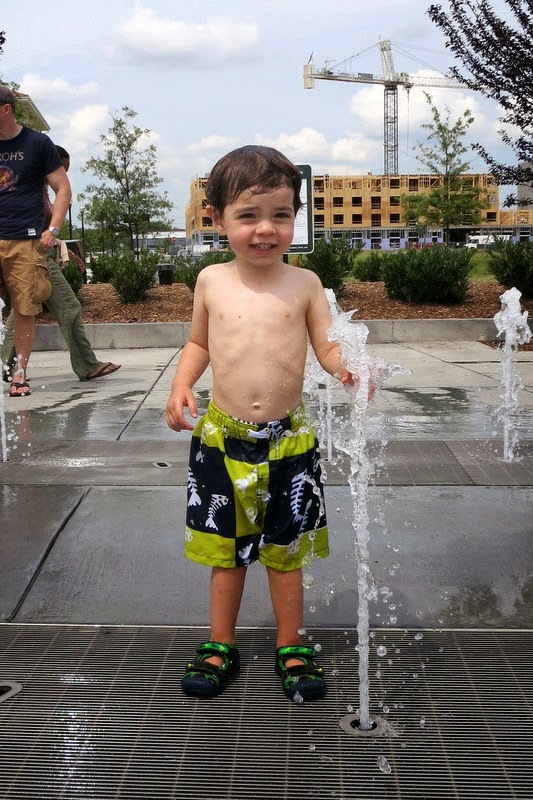 3)  Dina and Noam visited us this month, and brought a little rocket launcher (similar to this) for Fuzzy.  There was pure joy on his face as he yelled "One, two, fwee...BLASTOFF!!" while throwing his arms ecstatically in the air. 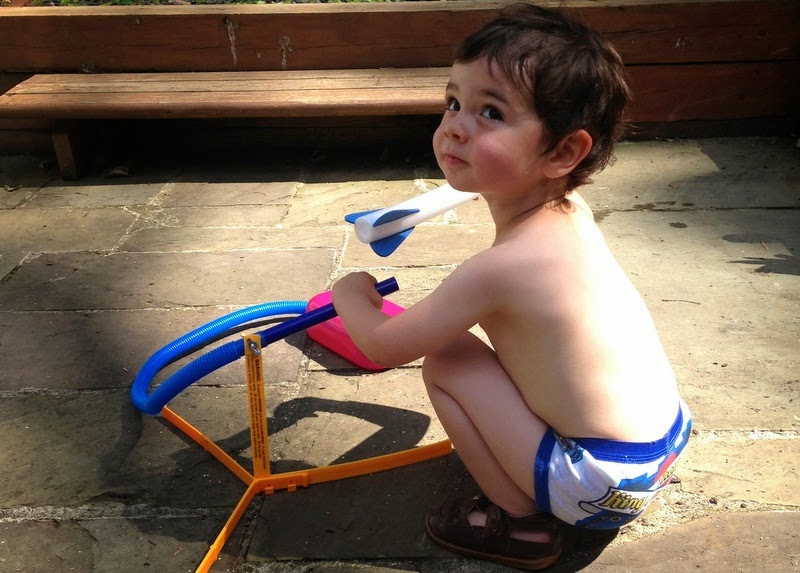 4)  In honor of said visit, my mother made a run to the Russian store, and amongst various delicious and disgusting foods, purchased some sprats.  The leftovers got put in the fridge, and a few days later, The Pit was at a loss for what to give Fuzzy for lunch.  He threw these in a bowl, and the kid gobbled them up like they were candy.

5)  Potty training has remained more or less the same as last month - if Fuzzy is induced to sit on his throne at regular intervals, all is good.  If we forget, his reminding us is rather hit or miss, and will often happen *after* he's already gone in his pants.  Sadly, he is rather resistant to actually using the potty throughout the day, as he appears to be under the misimpression that it only needs to happen once - "NO, I already did dat today!" he will exclaim when we suggest he sit down. 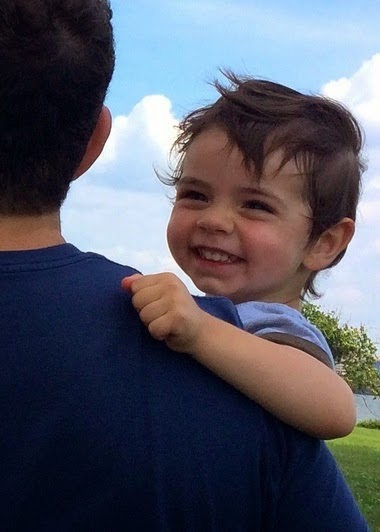 6)  The other day, I was getting ready for work and Fuzzy was running around naked.  As he ran past it, Fuzzy glanced at himself in the mirror, then paused, cocked his head, and murmured, "So handsome..." before running off again. 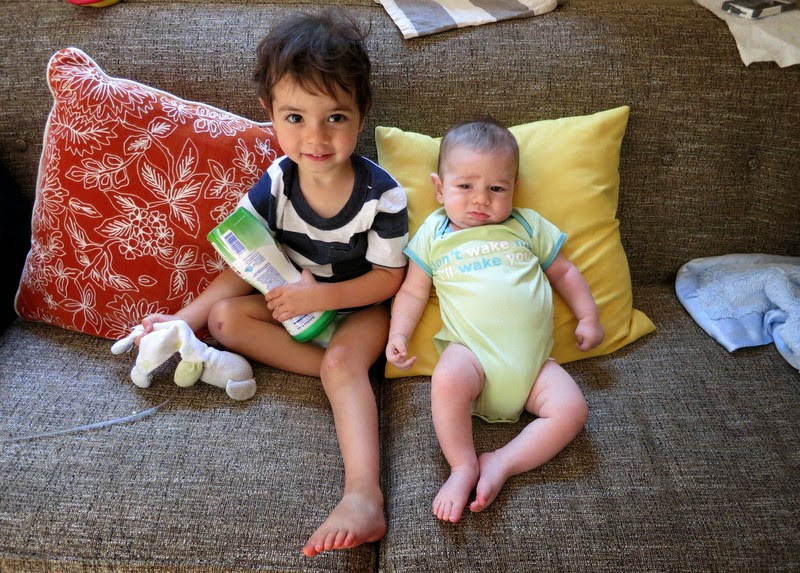 7)  When he really wants me to do something, Fuzzy will now ask for it in the following manner - "Little [whatever it is] fwee times?"  Apparently, just one of anything is now for chumps.  For example, if he wants more bedtime songs after I've already announced "last one," instead of saying "one more," as he used to, he will now beg, "Little song fwee times?  Pwease!" 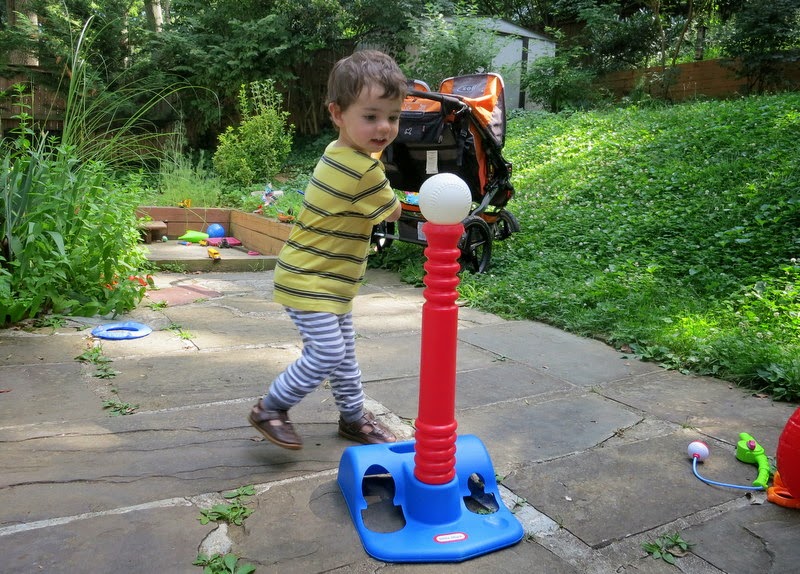 8)  The defining characteristic of this month has been incessant questioning.  "What dat Mama...what dat?  Mama, what dat could be?"  or "Where dat noise come from?"  Over and over and over again, about objects both novel and familiar.  Often, when I ask him what he thinks the thing is, he will answer correctly, or even name the thing in his question - I'm thus puzzled as to why he torments me with exchanges like the following:
"What dat motorcycle could be Mama?"
"Err...a motorcycle."
"What dat motorcycle Mama?"
"It's a motorcycle baby, you just said it yourself."
"What *is* it Mama??" 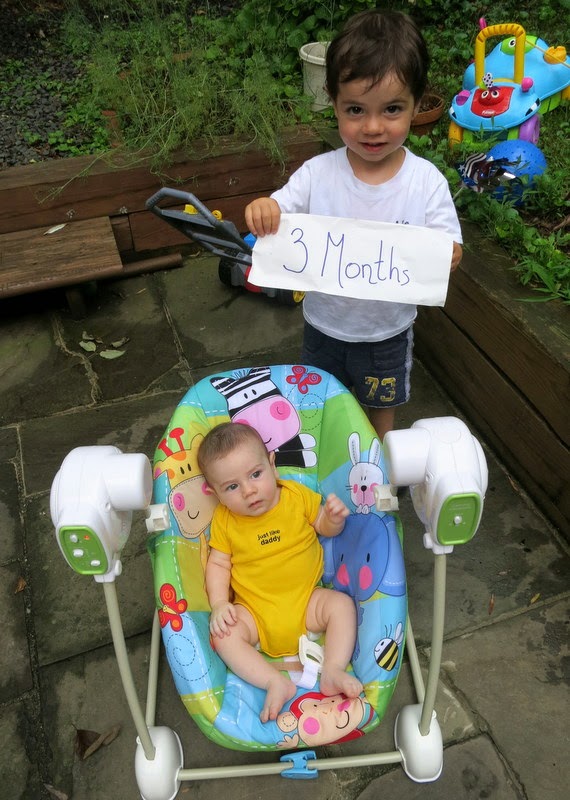 9)  We ordered pizza for dinner earlier this month, and Fuzzy got very excited when he was informed he could have some.  Then I handed him a slice, and he immediately got concerned "Dis yucky...want CLEAN pizza!" he said.  So I carefully picked off the tomatoes and bell peppers from his slice, handed it back, and set about eating my own.  He studied me critically, and then said, "No, want Mama's pizza!"  Then he shoved his half chewed piece at me, and gobbled up all of my slice.

10)  Fuzzy was given a tricycle as an early birthday present about two months before he turned two.  At the time, he could not seem to master the concept of pedaling.  I'm proud to report that he's now mastered it, although in keeping with Peachy-side-of-the-family laziness, he only pedals downhill. 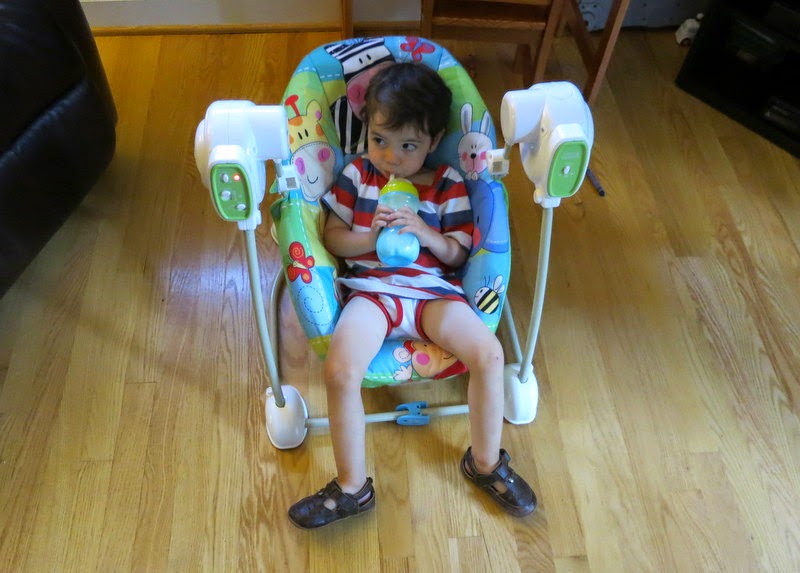 11)  Fuzzy now pronounces banana as boonana, and mango as manga.  As in, "Want manga juice Mama!" 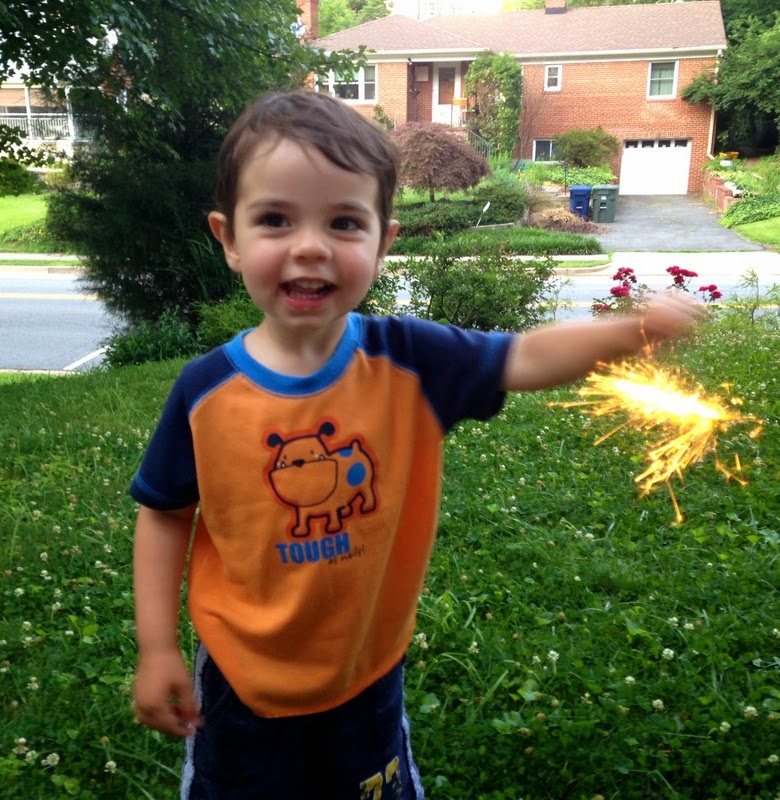 12)  Other recent exchanges amusing because he's talking more or less like an adult:

Sprout starts to cry.  Fuzzy:  "Mama, hug Fpout"
Me: "Do you want to do it?"
Fuzzy, while clutching his Thomas the Train: "No fanks, I holding Thomas wight now." 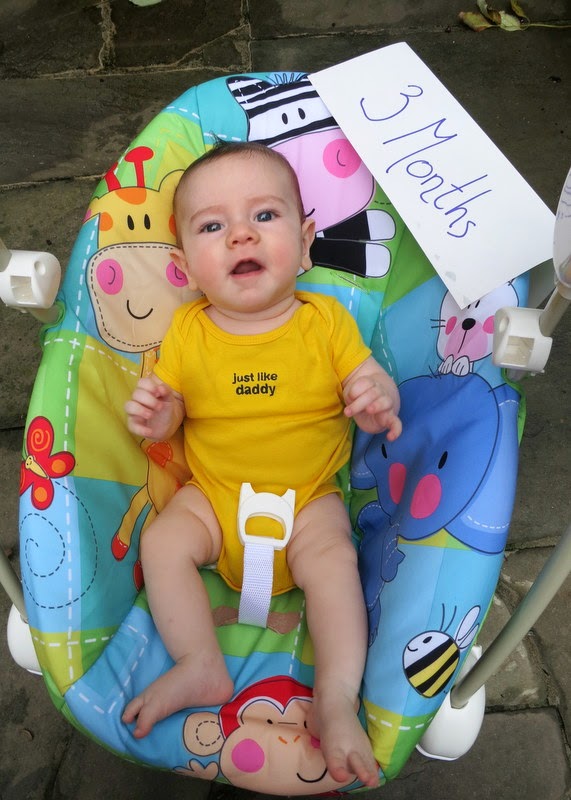 1)  Sprout is a...solid baby.  Unlike his older brother at this age, he has a plethora of folds.  So many folds, in fact, that I noticed a rash creeping in, and discovered that it is actually very difficult to get at his very inner neck.  The operation entails much squirming, and requires two adults. 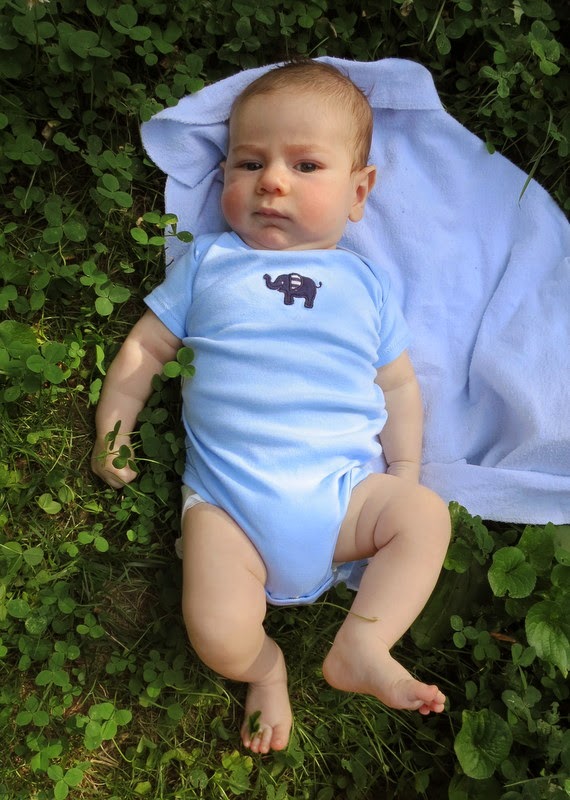 2)  July 1st, the baby did me a solid and slept for 6 hours.  Sadly, apparently I only get one of these respites every month, as the rest of the time he continued his waking twice per night routine. 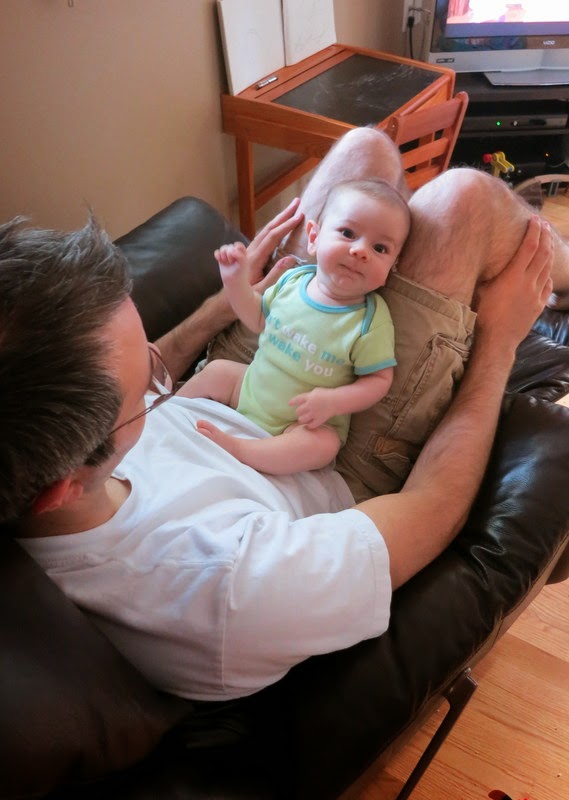 3)  Sprout finally put all of last month's tongue explorations to use, and started blowing spit bubbles. 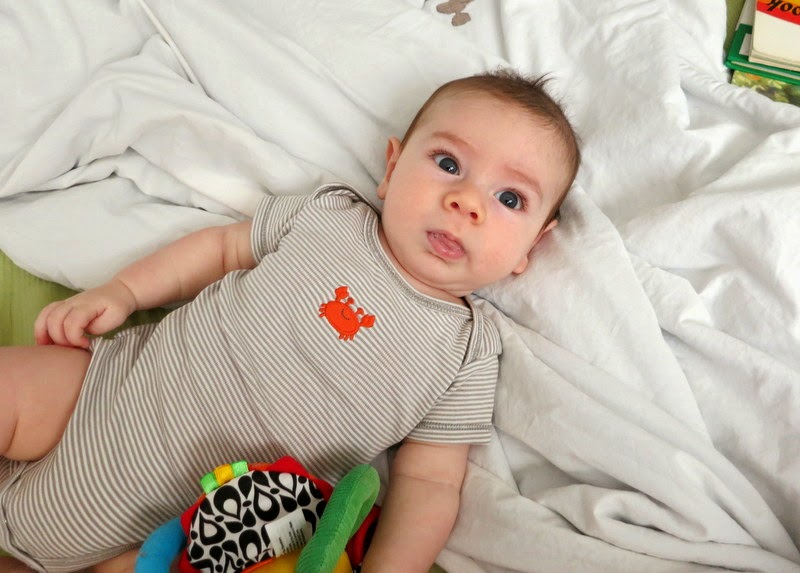 4)  Sprout's legs continue to demonstrate prodigious feats of strength...when he is put down to nap on the mattress in the basement (best spot for napping as it is furthest away from Fuzzy), he will eventually wake up and propel himself forward until he travels several feet and falls off the mattress.  At this point, we hear much wailing, although the mattress is about three inches off the ground from carpet, so he is always unhurt. 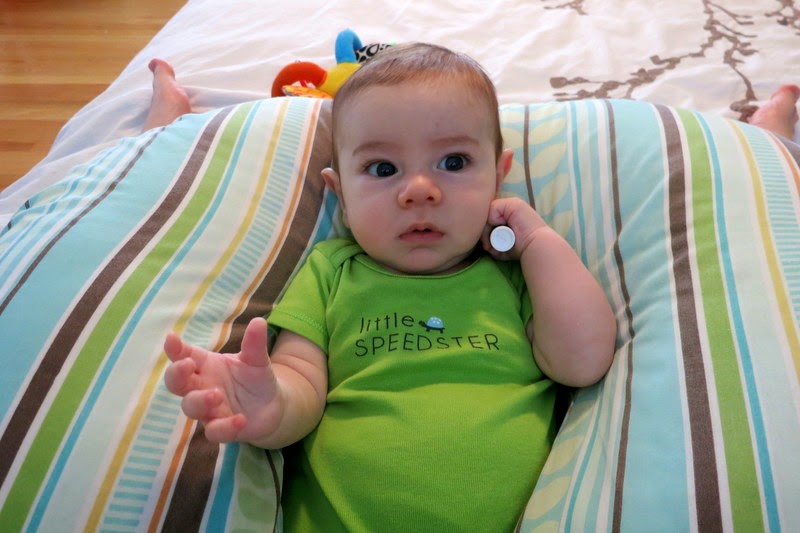 5)  He's begun grabbing at cloth burp rags, blankets, and his own onesies, trying to stuff them in his mouth...although his hand-eye coordination could still use significant work, as these efforts are only successful about 30% of the time.  He's also made a few attempts at grabbing toys, but only when they've been held directly next to his hands...he makes zero effort to reach for anything dangling a few inches away. 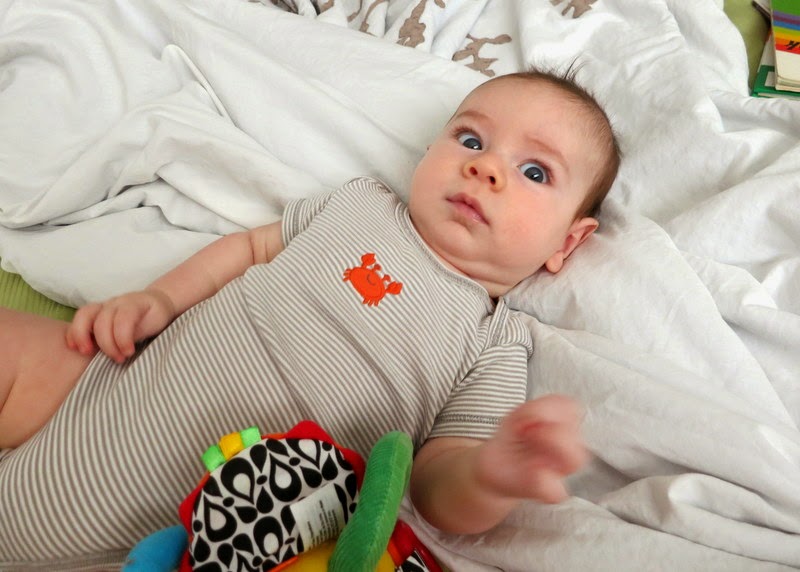 6)  Yesterday Sprout made big progress.  He finally managed to stuff his fist in his mouth on purpose.  I watched him clench his little chubby hand, and then weave his arm all over the place in concentration until he finally brought it near enough to chomp on. 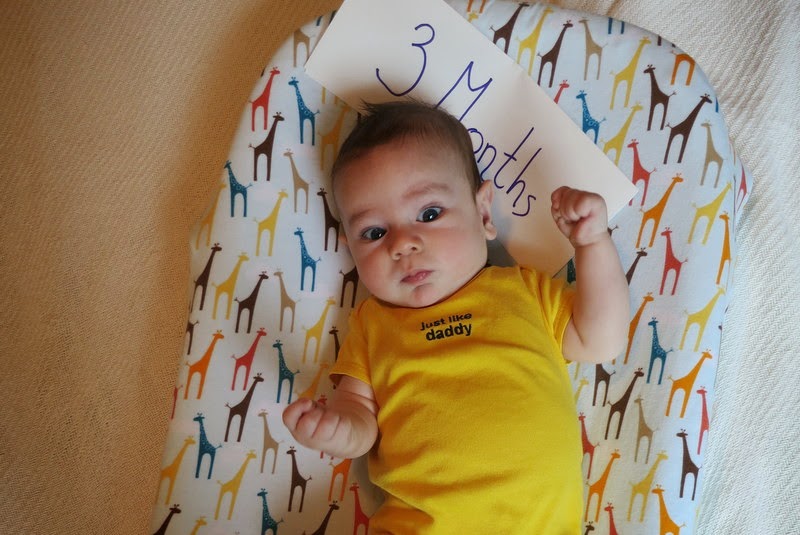