This month was chock-full of new and cool Fuzzy developments. 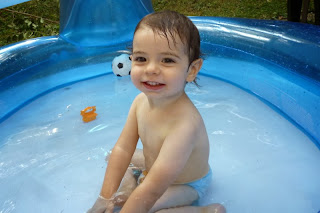 1) Several new words this month, with a couple of them doing double duty:
buh = book or ball, depending on context
buh buh = apple
bellalala = umbrella
blablabbala = granola, watermelon, or any other word with lots of L's
ahmmm = arm (said exactly like an elderly Bostonian)
ower = flower, or sometimes shower, depending on context
cunga = corn or acorn

2)  In addition to his new words, Fuzzy came up with several new games.  His very favorite currently involves running around and around an object.  The object in question isn't that important - I've seen him circle me, a chair, our bed, and the coffee table with seemingly equal enjoyment.   This enjoyment is conveyed by laughter, an occasional shriek, and a huge grin when he catches you watching him.  Another new game is grabbing something on a string - again, the actual object isn't that important, and then dragging said object all over the house.  I've seen him do this with several toys specifically designed for it, but also with a heavy paper bag we use to store a lot of his stuffed animals and various trinkets - the bag has thick string handles, and Fuzzy pulled and pulled on one of them until he managed to get the whole thing clear across the family room, dining room, and living room. 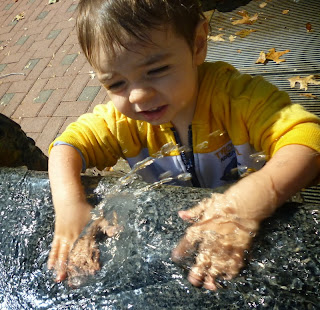 3)  In the mornings, Fuzzy often plays with a set of four plastic balls we keep in our room.  He gets great joy out of throwing them all over the place, hearing them bounce on the hardwood floors, and watching them roll around.  Sadly, the balls have a tendency to end up under the bed.  Fuzz knows this, and in the past, he's whined until one of us got the ball out.  However, one day this month, I watched him kick a ball under the bed, get down on his knees to look at it, and then whine for me to get it.  Unfortunately, he had kicked it right to the middle of the bed, where I couldn't actually reach it.  I told him this, and then watched as he seemingly lost interest in the ball and wandered over to my closet, where he started tugging on a hanger and whining when he couldn't get it down.

I thought he just wanted something new to play with, so I gave him the hanger.  He went over to one of the balls not currently under the bed, glanced up to make sure I was watching him, and then hit the ball with the hanger.  Then he handed the hanger to me, got down by the bed, and pointed at the stuck ball.  Lo and behold, I could in fact reach the ball with the hanger.  The Pit didn't believe me when I described this feat of reasoning - so a few days later, I saw the scenario play out again, this time with The Pit in the room, and the ball much closer, under a dresser.  When Fuzz went over to the closet, The Pit said, "I think he just wants something new to play with."  I was greatly vindicated when the baby pulled out a hanger, wandered over to the dresser, and started to waving the hanger underneath until he got the ball out himself. 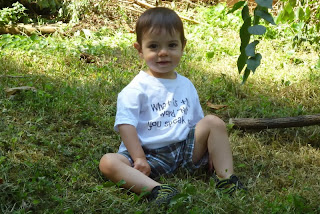 4)  Speaking of The Pit, he is once again on Fuzzy's favorite list.  As astute readers may recall, in his first few months the baby adored daddy, and was relatively indifferent to mom.  Then things switched, and for months and months I was the only one able to calm him down when he was crying, put him to sleep, or give him a bath.  Now The Pit is resurgent, with Fuzzy calling for him when he's in a different room, crying when he leaves in the morning, and generally wanting to be picked up and held by daddy.  I find this a great relief, as having a baby attached to your hip 24/7 is not the easiest way to go about your day.

5)  However, there are still several activities reserved for just Fuzzy and mama.  One of these is reading in bed in the mornings.   When we have time on weekdays, but usually on weekends, I'll get the baby up, and while dad is in the shower, we will lay together on my pillow, with me holding a book above our heads and reading.  Fuzz will lay still and pay attention to some relatively long books this way, and his current most demanded story is about Elmo.  Elmo is definitely Fuzzy's favorite character - possibly because he can say the name with at least some clarity - when Fuzzy wants to read about Elmo, he yells "EHMO!!"over and over until the book is presented to him. 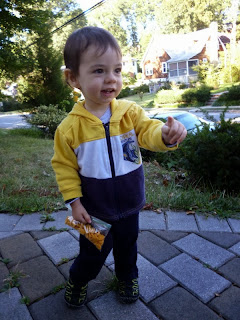 6)  In other signs that the baby is growing up, he now only wants to feed himself.  This is a bit of a disaster, because many of the foods he likes do not lend themselves well to fingers, and we are only now starting to get the rudiments of spoons.  For example, the other day I watched him assiduously try to pick up some peas with his spoon - only to be thwarted over and over because he was a) holding the spoon in a death-grip with his fist, leaving it completely unmaneuverable, and b) holding the spoon scoop-side down. 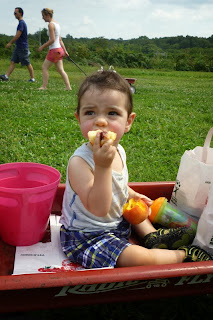 7)  Fuzzy has also developed a new laugh - expect it's not so much a laugh as a snicker, and it sounds remarkably like he is mocking us when he deploys it.  In combination with the fact that he now finds pinching people hilarious, the overall impression he gives off is remarkably similar to a tiny, pint-sized school bully.  Pinch - shriek from victim - "heh heh heh."

8) In a more adorable development, he now uses the sign for "more" to indicate not just food, but whatever else he wants - I was doing patygoosingkey, and when I stopped, he signed "more" repeatedly until I gave him more.  Similarly, he was freaking out in the tub for some unknown reason, and I started singing "Wheels on the Bus" to get him to calm down.  A couple of verses later, he had stopped crying and was listening raptly.  I finished, and he signed for "more" until The Pit made up some new parts of the song.

9)  Finally, Fuzz has grown two new teeth - oddly, not the ones adjacent to his previous front six, but instead two lower molars.  Or at least I think they are molars - they are pretty far back, and he won't really let me investigate for too long before he starts to bite.  You can sort of see one in the picture below. 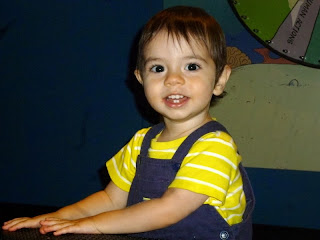 Posted by Peachy at 5:02 PM No comments: