1)  As promised, I have discontinued the detailed list of Fuzzy's new words - but be assured there was a lot of language progress this month.  In addition to him randomly knowing words like "dragonfly" and "nurse" that we have never used in everyday conversation,  the baby has also started stringing together three or four-word sentences.  For example, looking at people at the bus stop on our street, he pointed and explained to me, "Bus wait in go!" 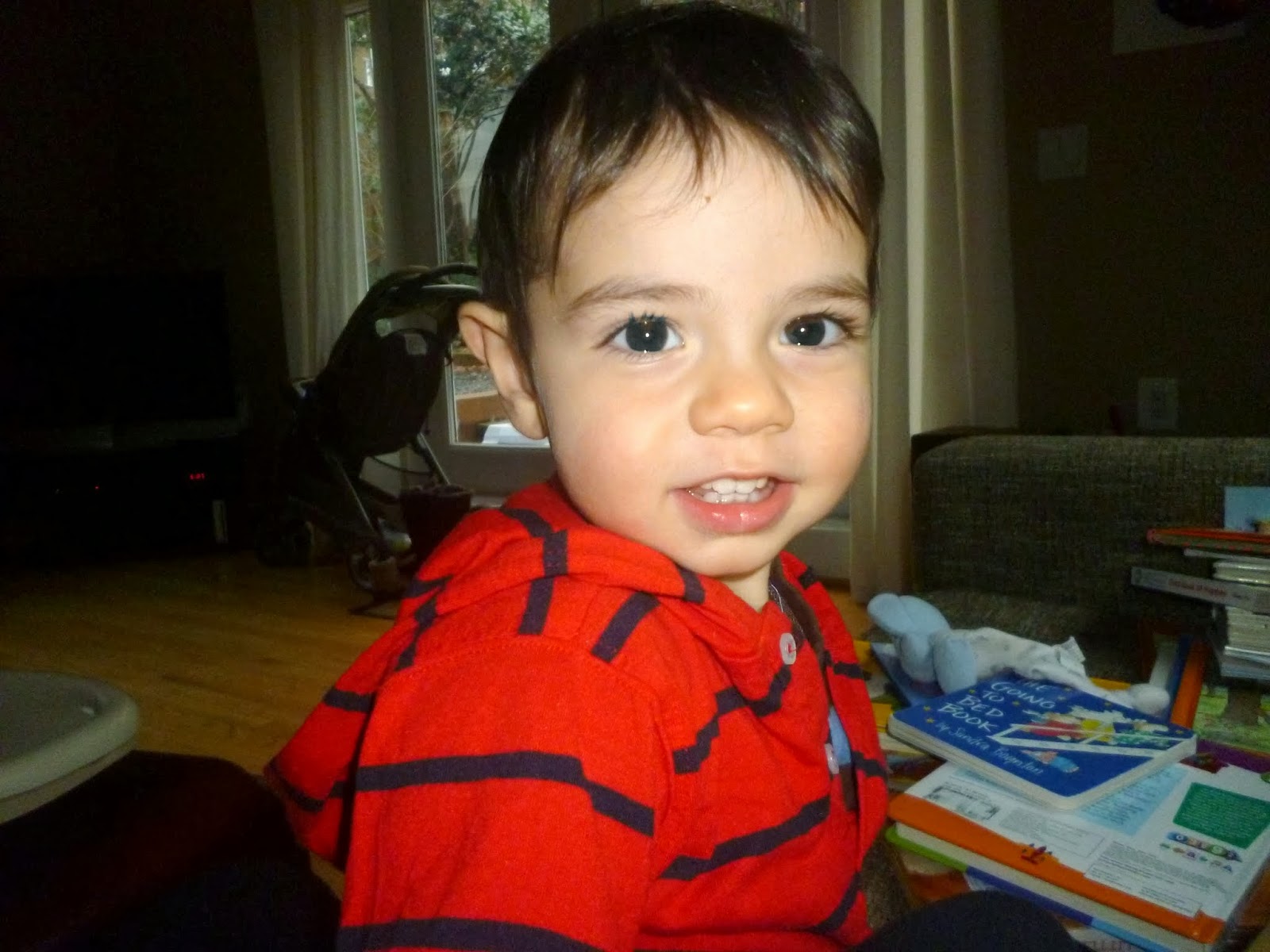 2)  At the beginning of the month, Fuzz started counting to two - everything of which there was two was quickly enumerated - eyes, socks, feet, hands, etc.  Then he added in three, which he pronounces as "fwee."  It did not phase him when there was only two of something to count - one duck, two duck...point at the the first one again...fwee duck!

By the middle of the month, after a week of religious drilling by his grandma, I saw him counting pinches of salt into a pot, going all the way up to seven accurately.  Alas, when grandma went home and we skipped on the rehearsals, Fuzzy quickly adopted a lazy man's counting approach, eliminating all those confusing and unnecessary middle numbers - "One, two, fwee...eight, nine, ten!" 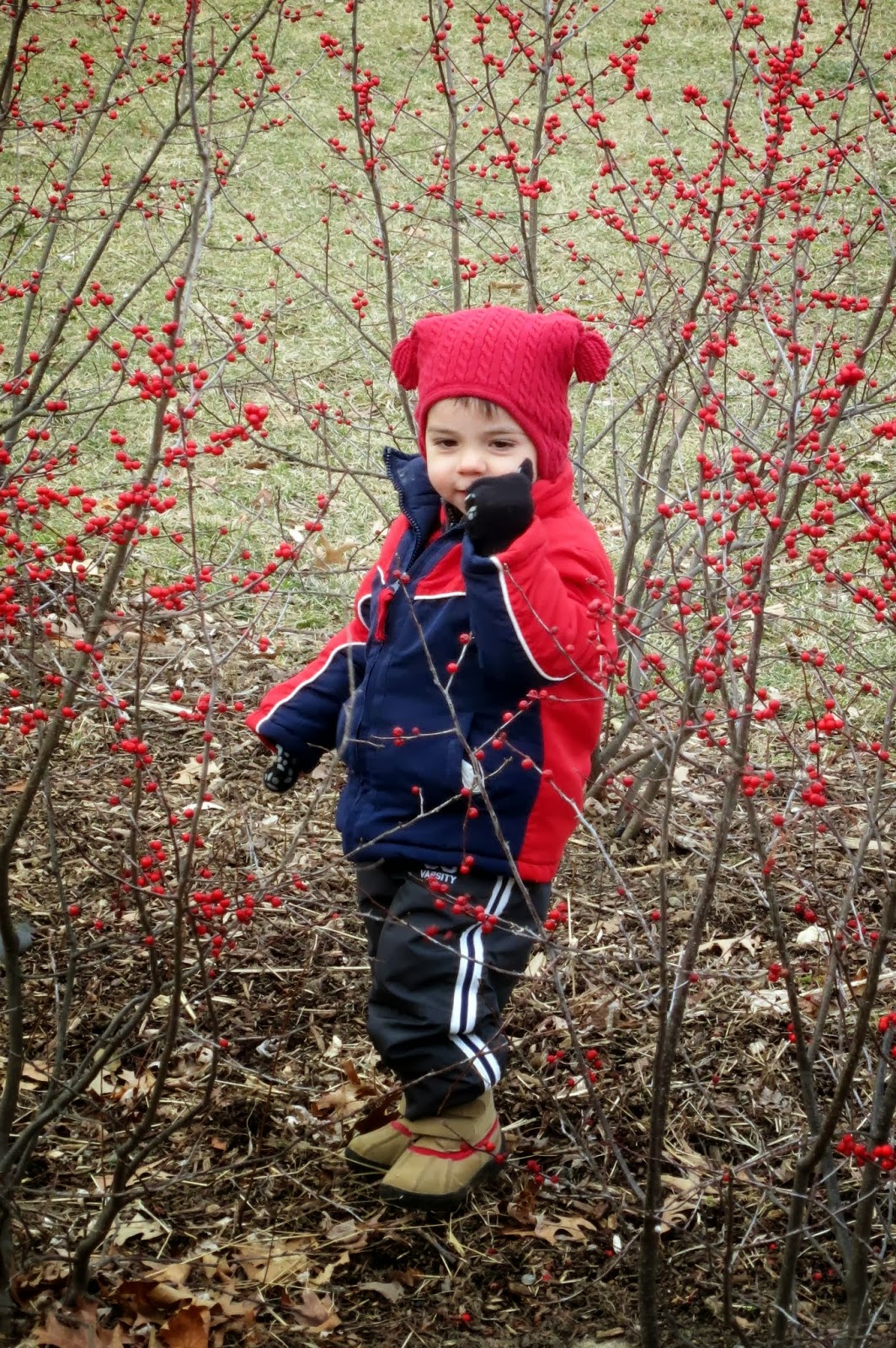 3)  For as long as I can remember, Fuzzy has hated windup toys.  It's a puzzling dislike, since normally mechanical things fascinate him.  However, he screamed at a wind-up toy around 5 months, and though he can now articulate himself better, the basic feelings haven't changed.  We went over to the neighbors to watch a bit of the Super Bowl, and their daughters tried to show Fuzzy small wind-up butterflies, caterpillars, and ladybugs.  Fuzz took one look and ran into my lap for shelter, yelling "No bugs! No! No! No!" the whole way.

I should note that it's not specifically bugs that he dislikes - at the Natural History Museum, his favorite part is their live bug display.  However, his natural caution kicked in when he was offered the opportunity to pet a giant Madagascar Hissing Cockroach.  "Mama twy" he demanded the first time he saw them, grabbing my hand and using my finger to touch the bug first.  Once it was demonstrated as safe, he consented to pet it with his own precious appendage, giggling the whole way.

It may have helped that the real bugs were relatively silent - Fuzzy exceptionally dislikes loud noises, and when threatened with such, covers his ears and scuttles to me, yelling "No noize, no noize!" 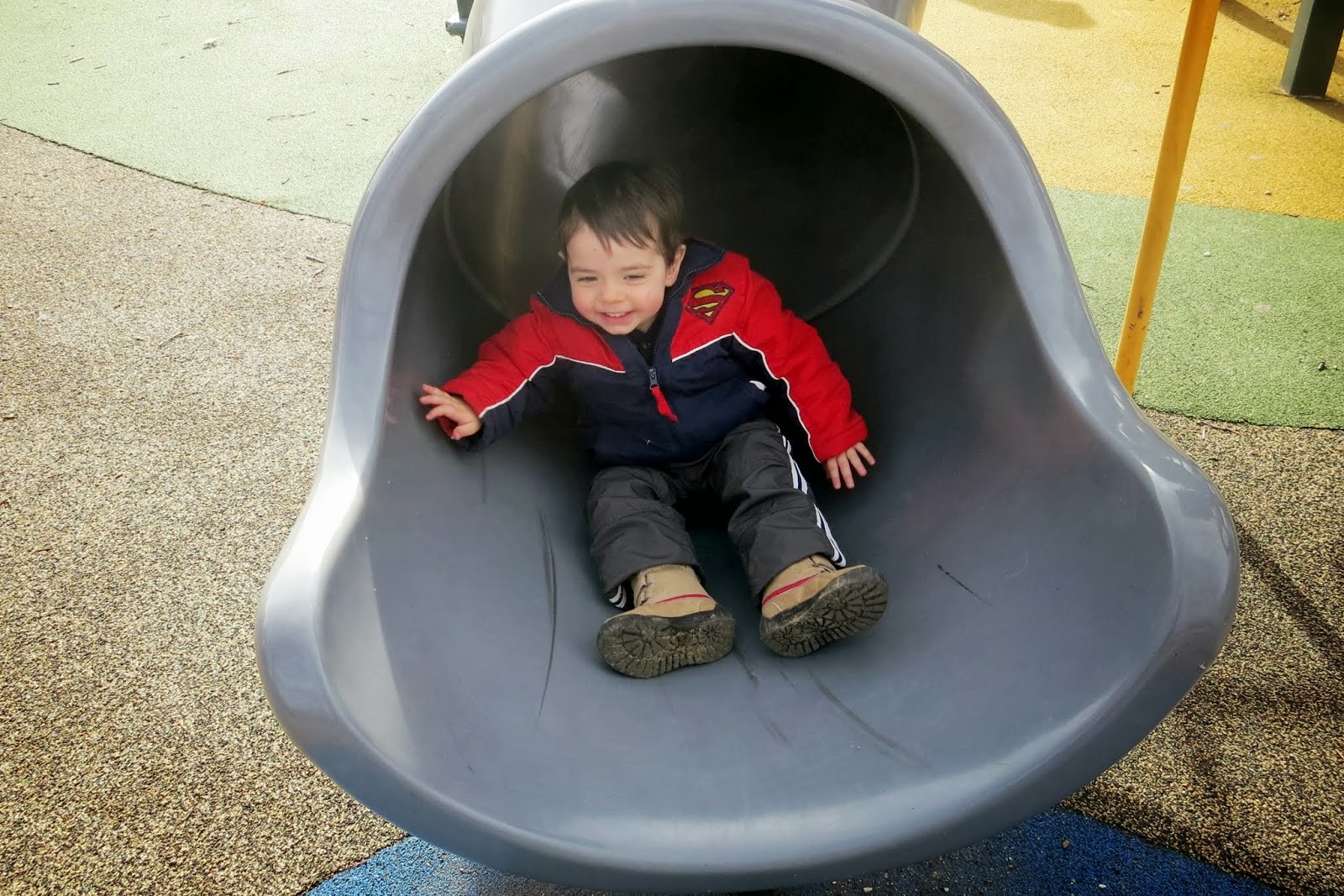 4)  In an indication that we probably should have potty trained him months ago, Fuzzy now imitates us when we go to change his diaper.  The other day I laid him on the changing table, opened up the diaper, and before I could articulate my findings, the baby said "Oh god!"in a close approximation of my voice.

After several incidents of him pooping in the tub during bath time, we've taken to asking him if he needs to use the potty.  To this question, he's hit on a fool-proof response: "No poop! Jus pee!"  This is also the answer we get when we ask if he's pooped in his diaper...give-away smell notwithstanding. 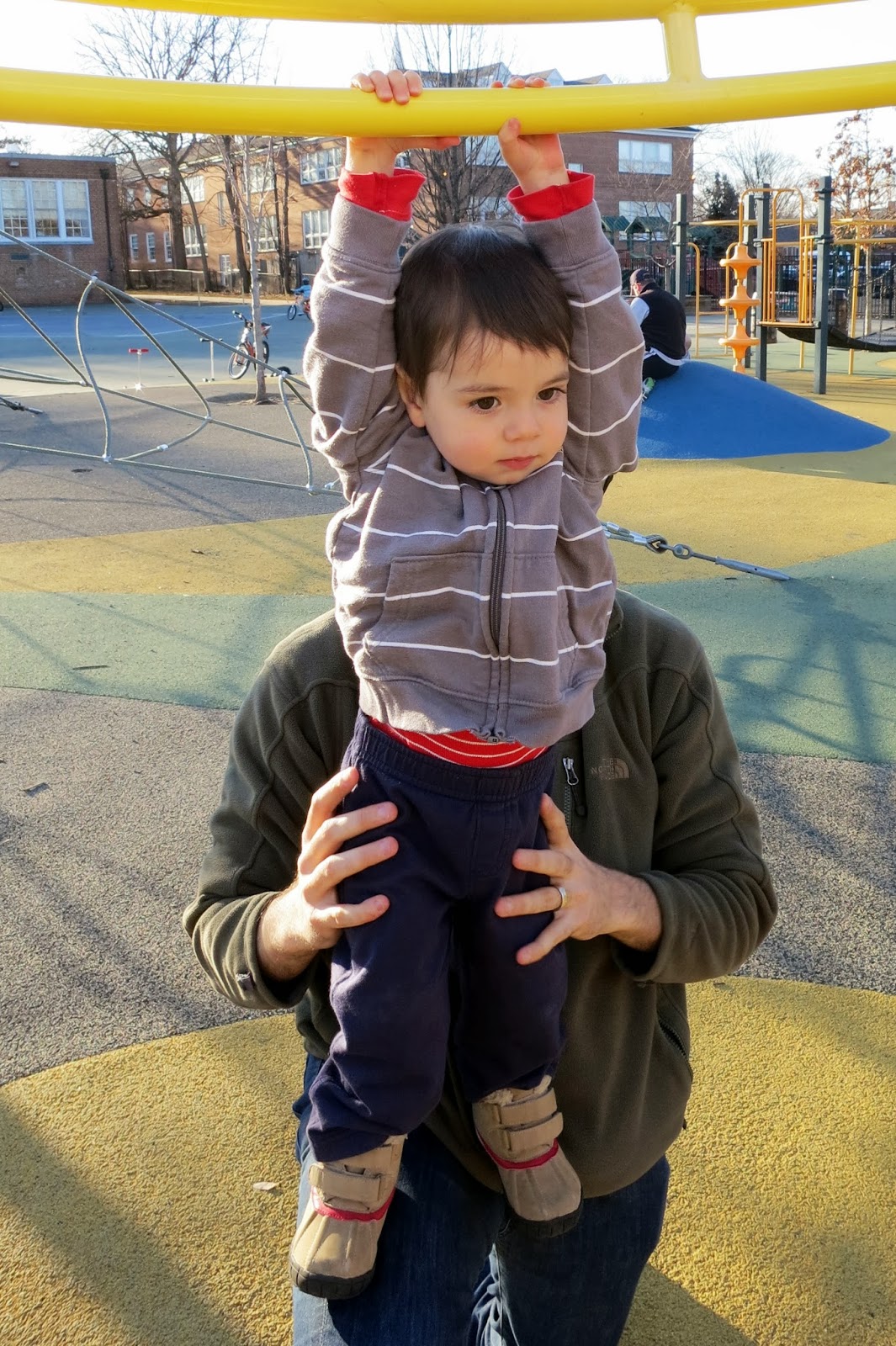 5)  One of Fuzzy's favorite books is a about a little panda that causes havoc when sneezing, and Fuzzy has gotten to the point where he can recite a large chunk of it from memory.  The best is that he gets a joke - there's a page where the panda goes "Ahhh....ahhh....ahhhh...no!" and doesn't sneeze.  Fuzz recites the line, and then giggles at the "No!" part before moving on.

6)  Fuzz has gotten pretty good at wheedling his way into whatever he wants.  He's picking up on the phrase "one more" while holding up a single finger.  So at bedtime, it's one more book, then one more song, and then one more, and one more, and one more.  It never ends, of course, so eventually Mama must put her foot down - but oh, it's hard to resist that cute little face and that cute little finger. 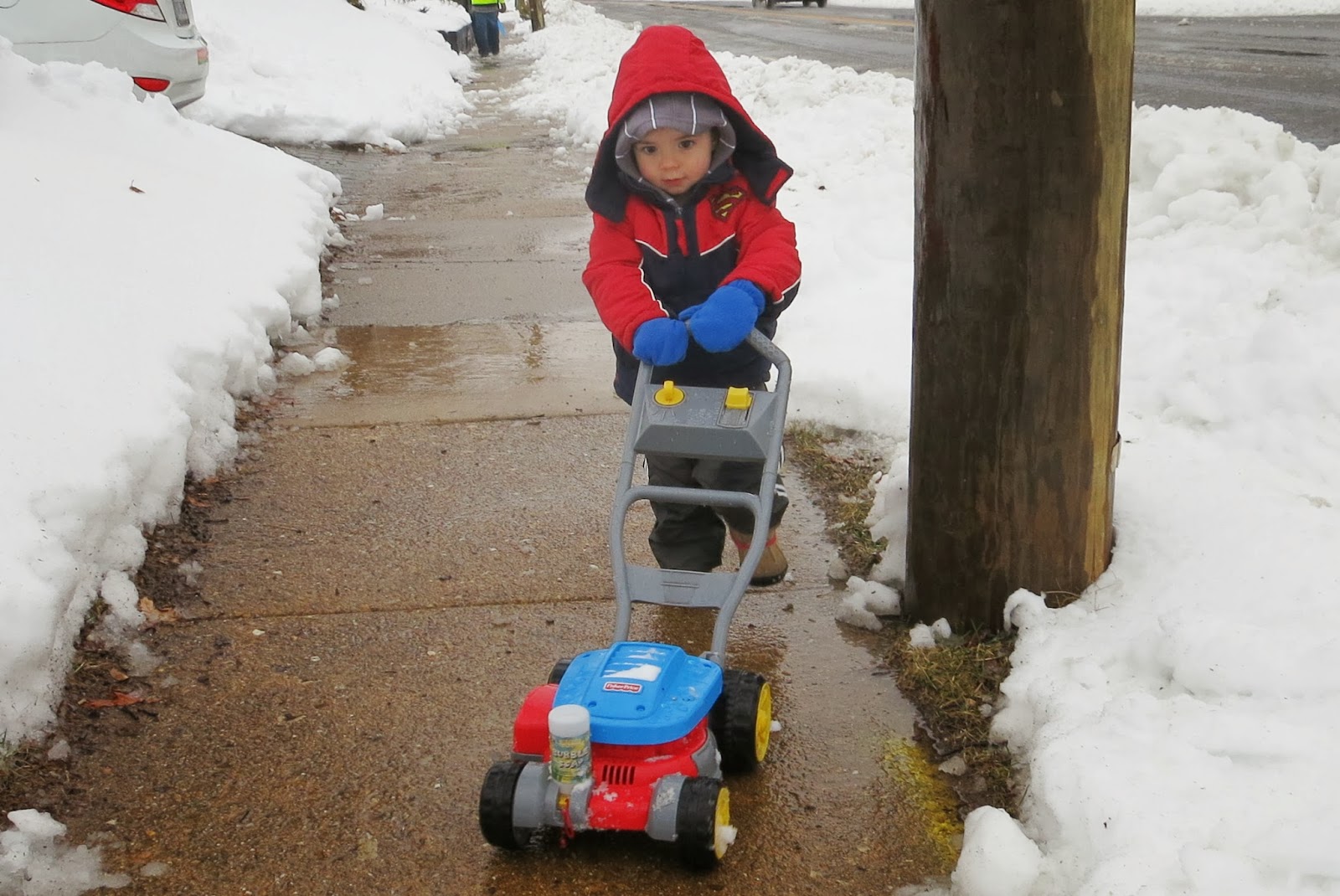 7)  In a less adorable development, at the end of the month, the child started throwing tantrums for the first time.  Typically, this involves him going as limp as possible so that I cannot pick him up, and then wailing while very carefully placing himself face-down on the floor.  Typically, a minute of ignoring and/or a distracting activity will solve the issue, and as The Pit observed, Fuzzy has yet to really commit to the tantrum.  I hope things stay this way, and Fuzzy's cautious nature prevents full-on flailing, as our hardwood floors are not the best surface for complete freak outs.

Posted by Peachy at 1:43 PM No comments: