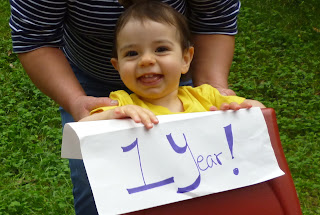 My little muffin is a year old.  It’s hard to believe that he once used to be completely immobile, staring at us dubiously as he lay on our laps.  These days, you can’t get Fuzzy to sit or lay still for very long.  Though he still falls quite frequently, I’m comfortable saying he’s more or less mastered walking.  The final building block for this milestone was his newfound ability to stand up without assistance right around the week of his birthday.  On occasion, he now even appreciates the concept of obstacles – for example, taking an extra large step to clear the hose laying in his path as he toddles across the backyard. 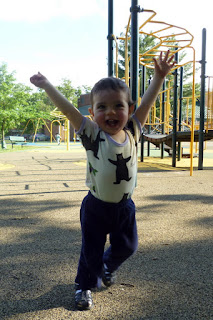 At the beginning of May, he started copying some of our most common activities – if we stuck a cloth in front of him and asked him to help clean his highchair, he dutifully clutched it in his fists and smeared it around the tray.  And the broom is one of his favorite new toys.  When he sees Maya sweeping, he tries to grab it away from her, and will only be placated when I hand him his own little sweeper. 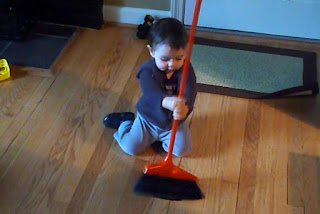 Also around the first week of May, Fuzzy surprised me with his mastery of the sign for “more.”  I had been futily sticking my fingers together for weeks with no appreciable comprehension from him.  Then, just as I was starting to give up, he made the sign in the correct context, and complete unprompted.  The two of us were sitting in the backseat of the car, waiting for Daddy to run into the store and grab something.  To keep Fuzz placated, I had given him a fistful of Cheerios.  When he ran out, he looked at me and made the more sign as if he had been doing it all his life.

On May 4th, Fuzzy took another leap forward with his first recognizable word.  I took out a banana to feed to him, and he joyfully pointed at it and shouted “NANA!”  There is some debate in our household as to whether nana is in fact his first word, as he has been using “da” to indicate duck for quite some time.  But since da was also the first syllable he could say clearly, it is also his fallback word for everything else in the world too, especially if the object in question began with a D sound.  Much to The Pit’s consternation, daddy and doggy are both dada to Fuzz.

All month, The Pit endeavored to teach Fuzzy the difference between his two favorite bath toys, the duck and the fish.  Although he still can’t say “fish,” Fuzz does know the difference between them, and when asked, will hand over the correct toy.  As previously mentioned, he does quite firmly refer to ducks as “da,” whether they be in the bath with him, pictured on TV, or in a book.  Based on his limited experience, Big Bird is also a da, what with being all yellow, vaguly duck-shaped, and coming equipped with a beak.

Once he mastered the whole fish/duck difference, I started pointing out the fact that both his fish toy and duck toy have eyes.  It took about a week for Fuzzy to go from pointing to the eyes when asked to saying “ayyyy,” the closest approximation of the word to date.  Along with a drawn out "haaaaa" noise for hot, this is now the sum total of Fuzzy's vocabulary - nana, da, dada, ayyyy, and haaaa.  Oh, and he makes a little motor noise with his lips to indicate cars - The Pit is not altogether sure if this counts as a word, but I say if a tribe in Africa can communicate with clicks, Fuzzy pushing along a toy car and "brrrring" to himself is indeed communication. 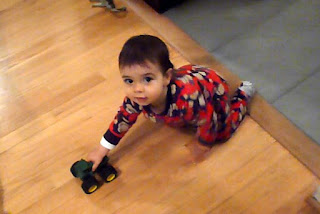 Posted by Peachy at 9:46 PM No comments: