1)  I think after this month, keeping a list of Fuzzy's new words will get unrealistic - he added so many in the last few weeks that I've only managed to write down a fraction.  Clearly he's still having trouble with 'r' and 'l,' but his pronunciation has improved significantly, and he's now occasionally using two words together to convey his thoughts. 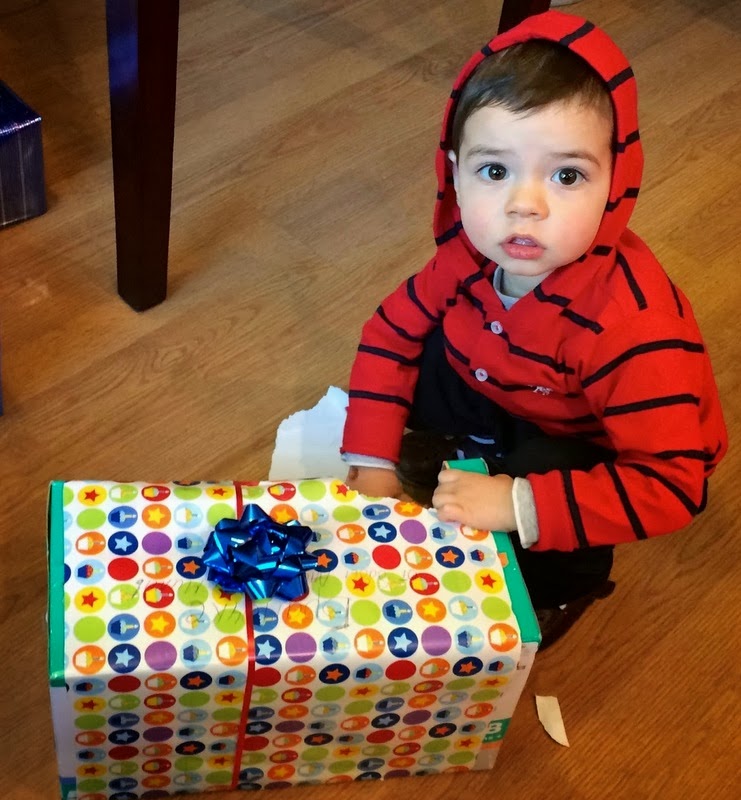 2) This month we spent two weeks in California, visiting the family over Christmas/New Years.  Our home base was my mother's house, where Fuzzy developed an obsession with her cat.  Although fully capable of pronouncing cat - I got him to say it once - Fuzz decided that a better name for the creature was "Na."  For those who have not encountered him, I should clarify that Na is particularly unfriendly: Dina once perfectly captured his personality here.

Na's alternating disdain/fear/loathing of Fuzzy did not, however, discourage the baby.  If anything, his continual attempts at escape only made Fuzz more ardent in his affection, both for the cat, and the cat's tail, which he treated as a whole separate entity.  When the cat was captured and briefly held immobile for Fuzzy's benefit, Fuzz came over to the face area, said "HIIIIIII!!!!" and waved frantically.  Then he repeated this procedure, only now facing the wildly agitating tail.  Below is another encounter between Fuzz and the cat that my sister filmed:


Following this encounter, we would have long conversations about tails, and who does or does not have one.  "Na tay?" Fuzzy would ask, waving in the general direction of his backside for added explanation.  "Yes, the cat has a tail." I would respond.  Then Fuzzy would go down his list of people with Names - Bebe (himself), Mama, Dada, Noooom, Dindy, Baba, Anya, the unpronounceable thing he calls my dad, etc., asking if each had a tail.  On the plane ride home, he then started pointing at all of our fellow passengers, asking if each had a tail.

3)  The other most memorable moment of our trip was the haircut Fuzz received from my mom.  It was just a light trim, but we did it in the bath with his full cooperation, explaining that hair cuts were a thing that periodically happened.  He was pretty good about sitting still for it, but the best part was that he remembered it every couple of days thereafter, and demonstrated this memory by grabbing at his hair and saying "Baba cut."  Now that several weeks have gone by, the remembering is less frequent, but he still points to scissors and says "cut," and sometimes, after going through who does and does not have a tail, then repeats the whole list to inquire about whether each person has experienced a haircut. 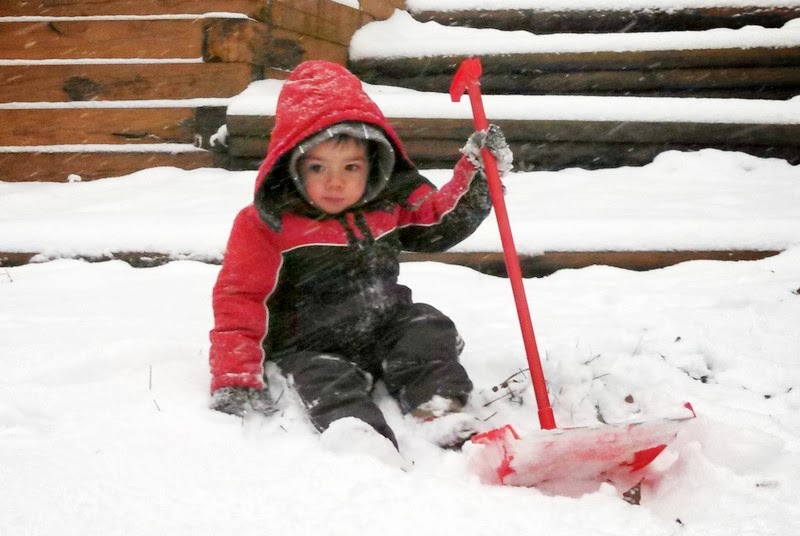 4)  His pretend play has expanded somewhat - not only does he want to feed his toy horse, but he also wants Mama to pretend to be a horsie.  Whenever I unwisely get down on the ground at his level in the basement, he clamors up to my back, yelling "Mama hoyse, mama hoyse!" and sometimes "Neeeeeeeeeey!"

5)  It only took two months, but now Fuzzy manages to get a tiny little bit of air when he jumps.  In further progress from last month, he is also now able (and willing) to build much higher block towers.

6)  Showing new understanding of the whole diaper situation, Fuzz has taken to talking about "dert" when we go to change him, and also mentions being "keen" afterward.  Sadly, this has made no impact on his desire to use the potty - in fact, when we ask if he's pooped and needs his diaper changed, he resolutely lies, shaking his head 'no' and going to hide in the farthest corner of the room from us.  This despite all olfactory evidence to the contrary. 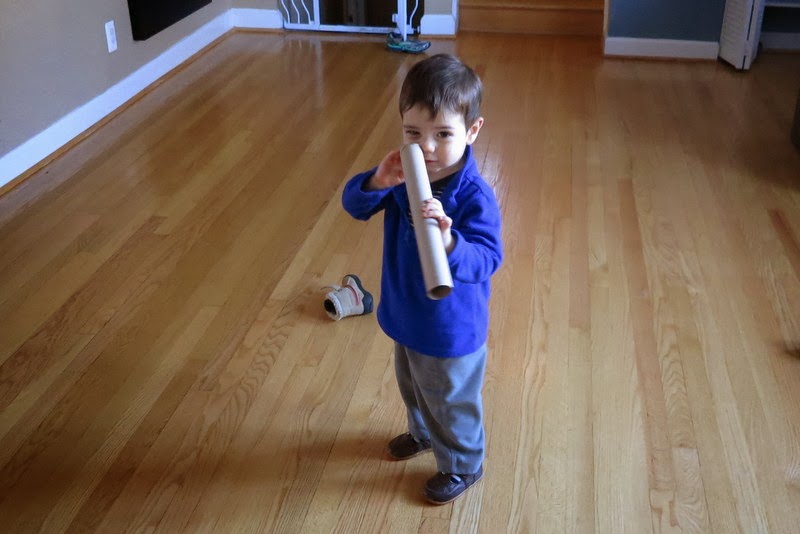 7)  However, this month does bring some progress on the counting, reading, and colors fronts:

Counting:  Previously, the baby was obsessed with the way that "eight" and "nine" sounded.  Sometimes he would yell out just those two numbers, apropos of nothing.  Now, he seems to understand what "one" means, and can also say it.  He still follows it up with nine, but I'm not looking a gift hoyse in the mouth.

Reading:  In the last few months, I suspected that Fuzzy was recognizing the letter "A."  I'm still not certain about that one, but he for sure knows "O."  I've seen him point to it on multiple occasions, in his books, on public signage, and sometimes on the keyboard.  He has also taken to "reading" aloud when he encounters letters out in the world.  At the moment, his reading sounds something like "ay oo eeeee ooo ay i."  Apparently we are fans of vowels.

Colors:  Previous to this month, Fuzzy showed no interest in colors whatsoever.  The beginning of this month brought some improvement, as he started calling every color "gren."  For a while, our color conversations would go thusly:  Mama points to green object, asks what color it is.  Fuzzy says "gren" and Mama gets all excited.  Daddy then points to another object of any other color, and Fuzzy promply says "gren."  Mama is less thrilled.  However, by the end of the month, he could, more or less reliably, also identify purple and orange - or "purpo" and "oren," as the case may be.

8)  My belly has grown to the point that it's impossible to ignore, so we finally explained to Fuzzy that Mama is growing a baby in there.  When he sees me changing, he will occasionally point to my stomach and say "bebe," but has not connected things any more with his life.  As far as Fuzz is concerned, there are at least two more important babies in the world - himself, and his stuffed toy elephant (this is his little comfort toy - he sleeps with it, and sometimes goes through periods of dragging it around with him everywhere).

9)  Unlike the baby concept, Fuzzy's understanding of people and their ownership of objects is improving significantly.  For example, for breakfast the other day I gave him a bowl of strawberries.  He picked one up, said "Mama," and gave it to me.  Then he picked up a second berry, said "Bebe," and ate it himself.  For his grand finale, he picked up a third berry, said "Dada," and pointed up to the ceiling, where we could hear The Pitt showering upstairs.  I applauded his generosity of spirit, but encouraged him to eat the rest of the bowl himself. 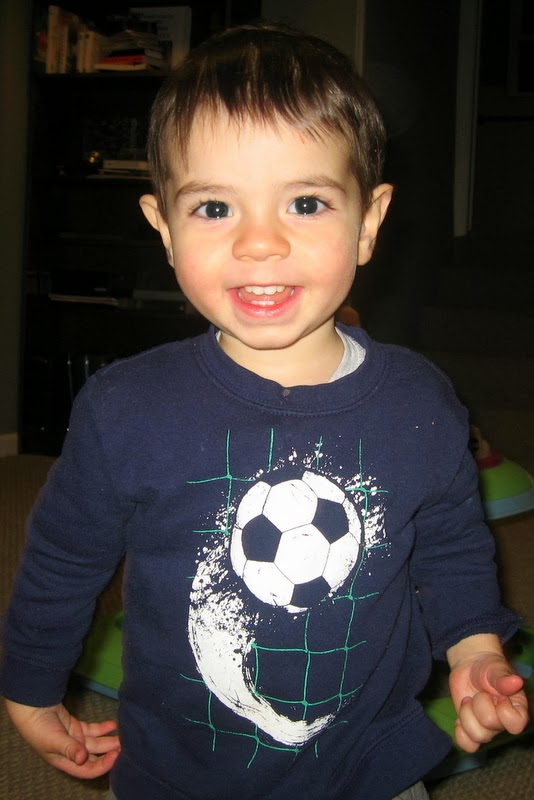 10)  This post is already getting way too long, but I would be remiss if I didn't document the kid's new-found love of stop signs.  Or 'top sighs,' as he calls them.  He likes to stand by them, and as cars approach, holds up his hand in a stop gesture, yelling 'TOPPP!" the whole time.  Then he relents, and tells them to "GOOOO!"  I'm sure the drivers appreciate his assistance.  Similarly, I'm sure our taxi driver on the way home from the airport was very thankful for these instructions, yelled at top volume from the backseat, whenever we got to a red light or green light.

11)  Okay, one more thing, because it is adorable.  We got a huge snowstorm in the middle of the month, and afterward The Pit went outside to dig out our cars.  While he was doing this, I thought of some urgent question I had to ask him, and so I opened the window in the house and yelled his name.  The baby observed this with interest, and then for the rest of the day, copied my exact intonation and facial expression, screwing up his eyes, leaning his head back, and yelling "PIIIIIITTT" at the top of his lungs.  The Pit did not find this nearly as amusing as I did, so I suppose it's good for me that the kid got bored of it after a day.
Posted by Peachy at 3:26 PM No comments: