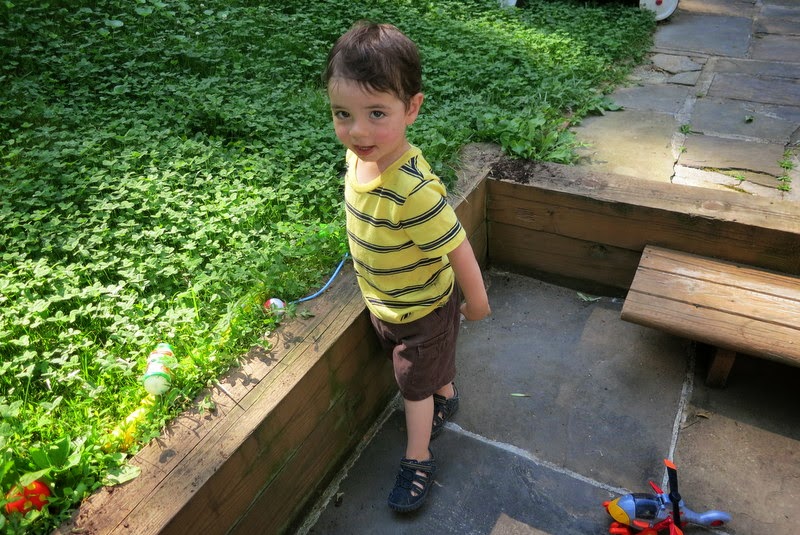 1)  Fuzzy has been exhibiting a surge of creativity recently.  We went to the sandbox, and he used a bucket to make sand "cookies," cut them in half, and then offered one part of each one to me.  Then, when he accidentally stepped on one sand pile, making a slope, he looked at it for a minute, and announced that it was a potty "for mama."  I got bored flipping buckets for him at some point, and stuck a leaf into the top of one overturned pail.  He looked at it, and excitedly told me it was candle.  Then he proceeded to sing "Happy Birthday" to himself. 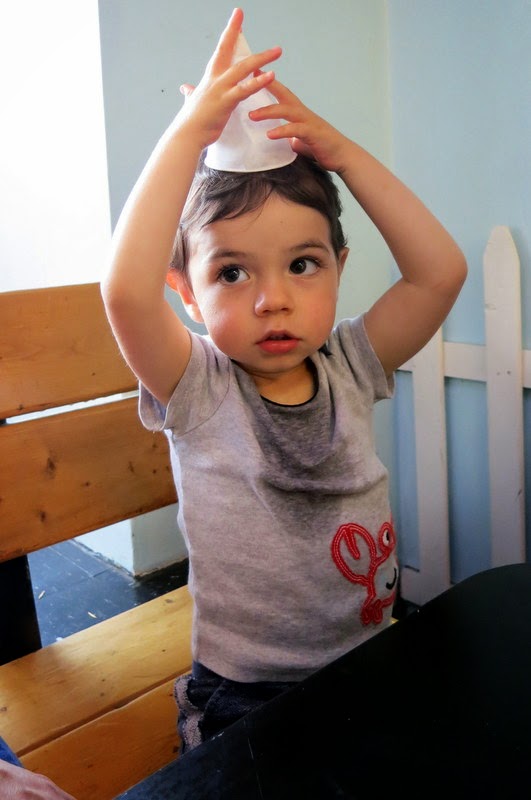 2)  This month brought a triumph for Fuzzy:  The Pit's mother visited for a week, and while she was here, started putting him on the potty consistently.  It took exactly one day of this, and wearing his Thomas the Train underwear, for the kid to get the point.  While there have been plenty of accidents since then, I would say he's pretty well on his way to totally potty trained...he even started waking up with a dry diaper a few days in. 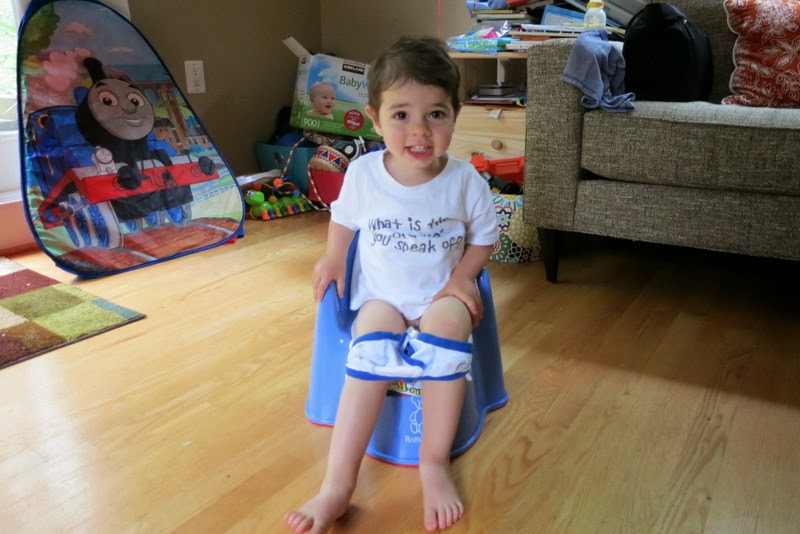 3)  There's been a little more insecurity this month on the baby brother front.  Although he hasn't been at all aggressive with Sprout, oftentimes when Fuzzy sees me feeding or otherwise paying attention to the baby, he will announce, "Mama hugging TWO babies!" and climb into my lap.  This gets a little awkward, but is so adorable that I don't have the heart to discourage him. 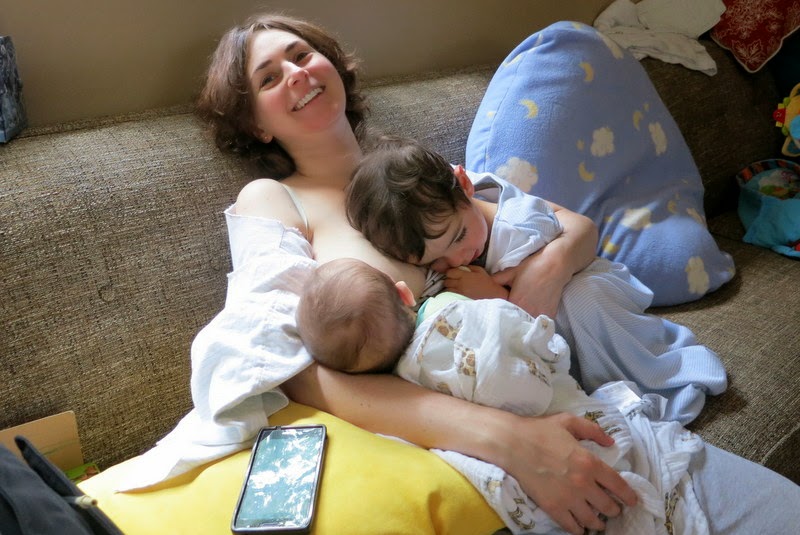 4)  Although he still prefers a firm nod, a long drawn out "yeeeeah," or an "okay," Fuzzy will now occasionally say "yes."  When prompted.  Repeatedly. 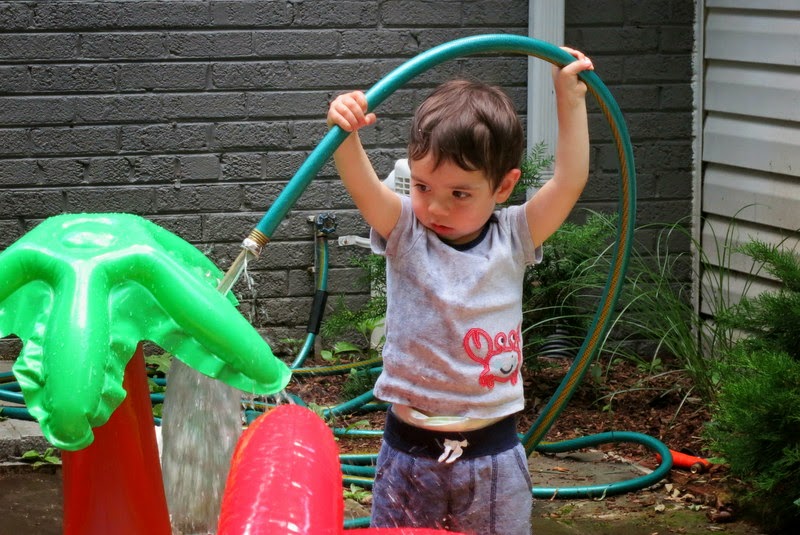 5)  A while back, Fuzzy and I evolved a bedtime routine wherein I sing him approximately three songs, then announce a last song, sing it, and leave.  While at first Fuzzy simply begged for another last song, recently he has taken to more creative measures to draw out the process.  For example, he will wait until I am about one line away from finishing the last song, and then demand that Mama "Sing diff song."  I am then obliged to start over with a different song, which, you guessed it, also gets interrupted near the end.

Another delaying tactic goes like so:  "Sing louder...louder....louder....NO, TOO LOUD! Sing slower."  Although slower and quieter seem to be conflated in his head, the end result is the same...Mama stays in the room longer out of confusion. 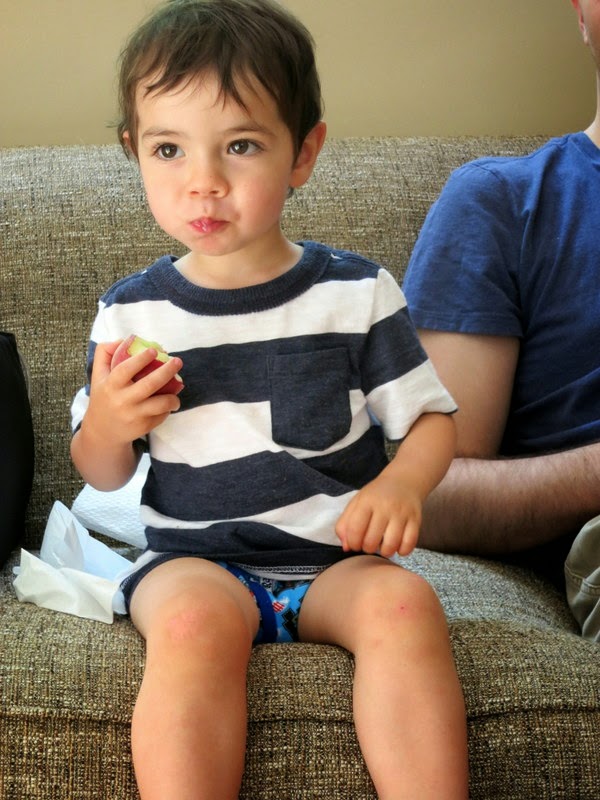 6)  Fuzzy usually sleeps through the night, but a week ago he woke up screaming.  When The Pit couldn't get him to quiet down, I dragged myself out of bed and sat on the rocking chair with him.  I asked if he had a nightmare, and this was the response I received:

When I explained that it wasn't real, that there was no man in his room, he went on with additionally details.  "Loud thing...beeps.  Pretty loud."

I have no idea what he heard or thought he heard, but loud things of all types remain firmly in the dislike column. 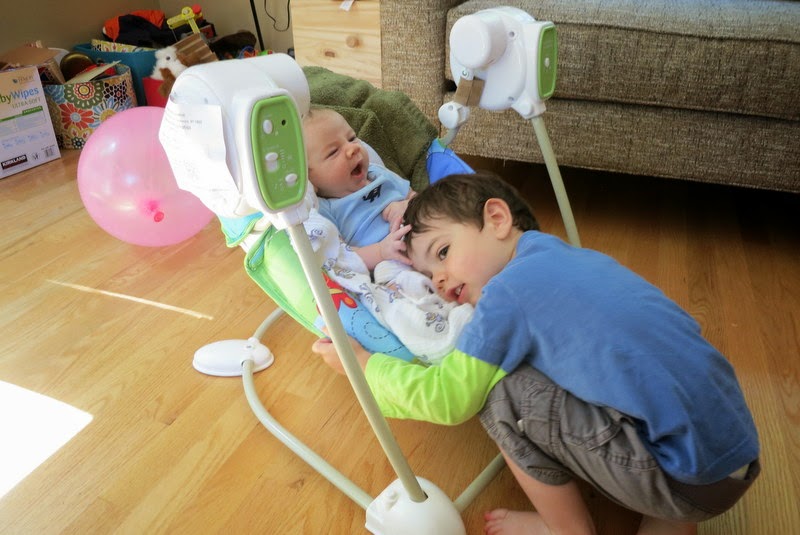 Sprout has spent the last month staying awake for longer and longer periods of time.  One the minus side, this makes things a bit more difficult for us, as gone are the blissful days when we could set the baby down on his lounger and go about our business.  On the upside though, we get to see more of his sweet personality. 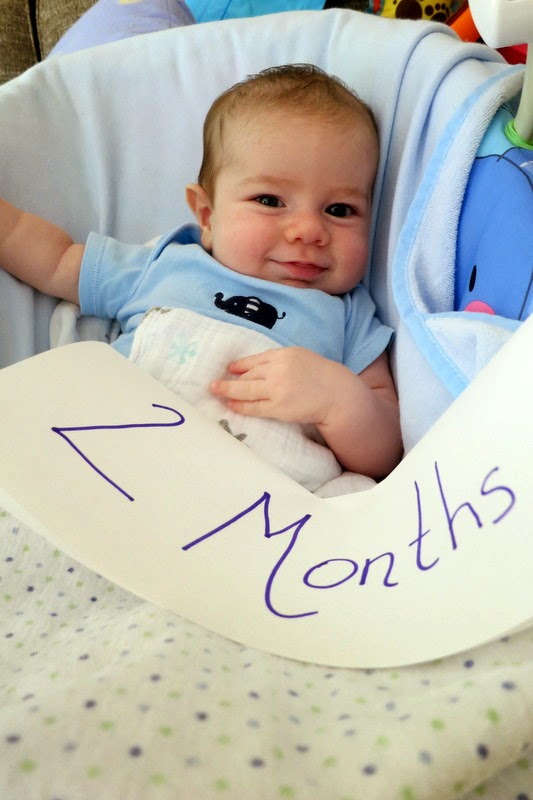 1)  About the middle of the month, he started smiling while he was awake, and although it still wasn't clear whether it was truly reciprocal, we all cooed at him with renewed vigor.  Around 7 weeks, or about a week after his first real awake smile, I noted an actual social exchange - I smiled, he smiled back, and the sun came out from behind the clouds.

2)  He started cooing this month too, but at first, it was clearly an unhappy noise, more of a whimper than anything else.  After about a week or so of that, the coos began to take on happier overtones, and now, we have little happy chats whenever he wakes up from his nap or gets his diaper changed. 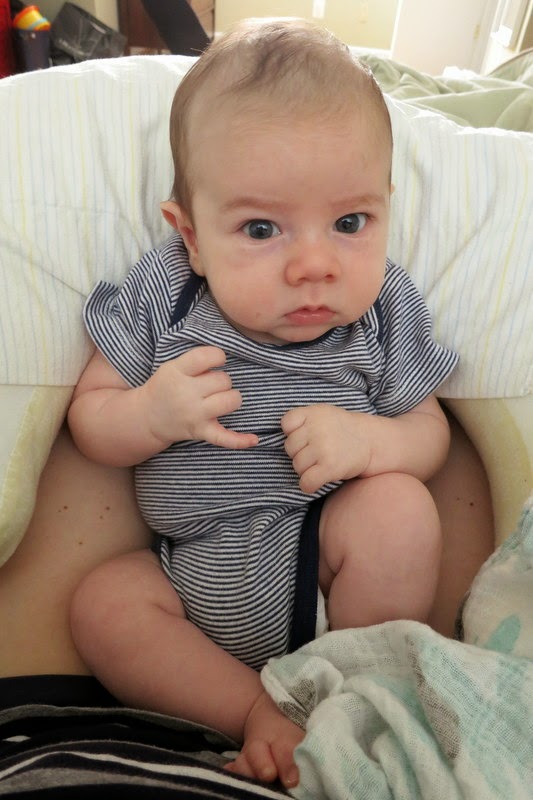 3)  To go along with the coos, Sprout has been obsessive about his tongue - he will stick it out, and we will see his eyes go wide with interest as he feel it with his lips and licks a little bit.  Then he will move it to the other corner of his mouth, move it in and out of his mouth, and look even more fascinated. 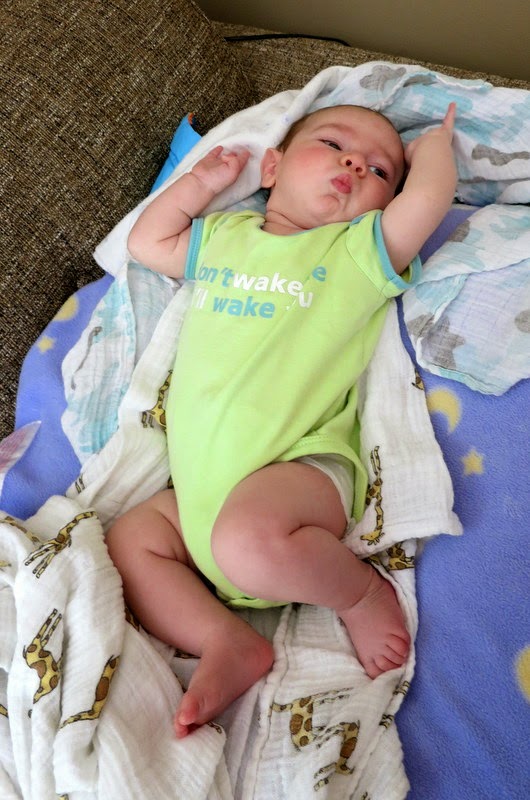 4)  When he isn't entertaining himself with his tongue, Sprout likes to have this tinkling elephant toy dangled in front of him.  This was Fuzzy's favorite toy at this age too, so there's clearly a genetic affinity for elephants in the family.

5)  Sprout's chunky little legs are incredibly strong.  He likes to be dangled from the armpits with his toes on the ground, and he will push and kick himself up and down, exercising happily. 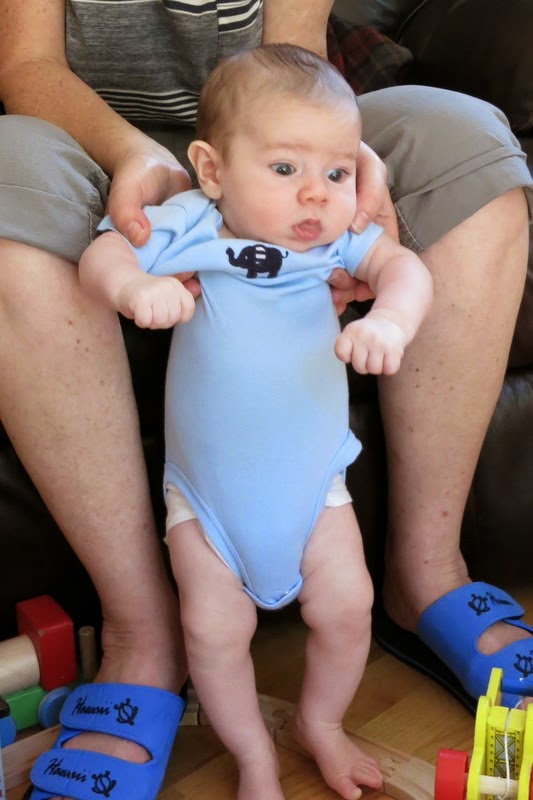 6)  I'm happy to report that on June 2nd, Sprout ate at 10:30 PM, and then went to sleep until 4:40 AM, resulting in a glorious five uninterrupted hours of sleep for Mama.  May this day be repeated soon.