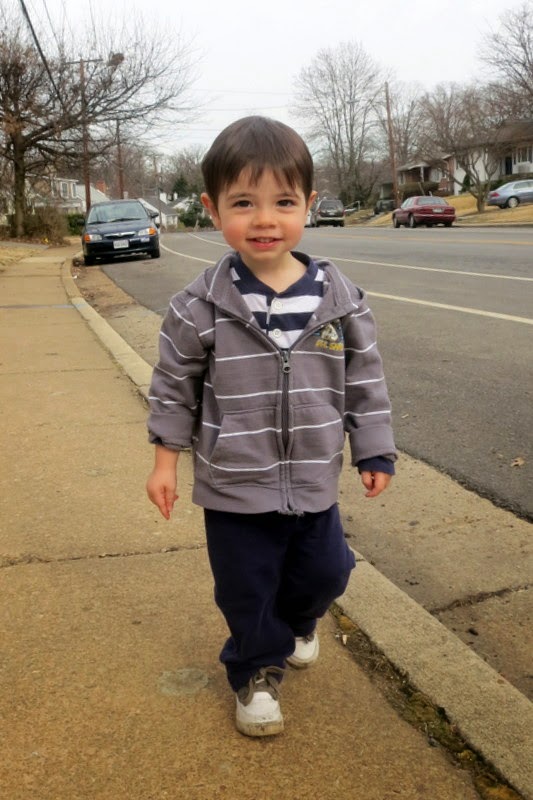 1)  For the first time, Fuzzy started referring to himself by name this month.  Except his real name has an 'r' in it, and he can't say that letter yet.  So he omits it, which is funnier in real life than on the blog.  But for illustrative purposes, let's say he calls himself Fizz instead of Fuzz.

2)  He's also expressed emotions for the first time - we have a book where the puppy is sad because he can't wag his tail, and Fuzzy points at his frowning face, and says "puppy fad...no tay wag."  Similarly, he can now also articulate that he, himself, is 'fad.'  He's been playing with the same stick in the basement for months now, and the other day he broke it.  Afterward, he came up to me making a sadface, and said "Fizz fad...tick boke." 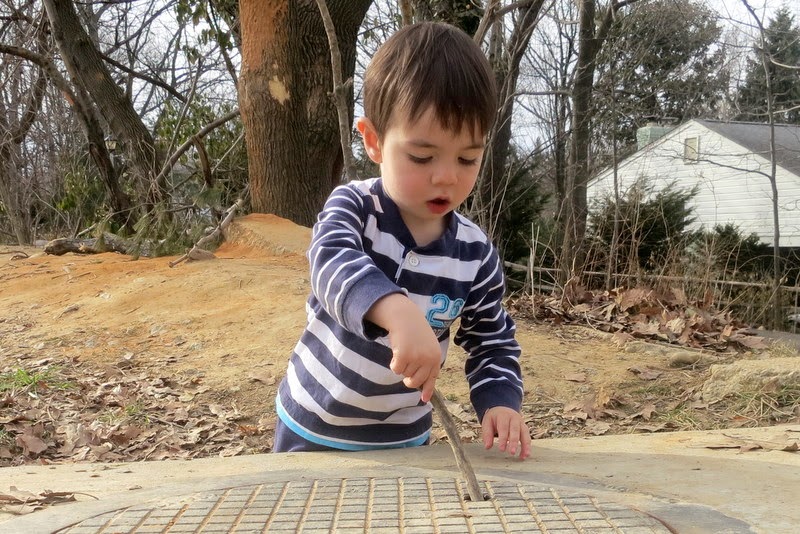 3)  Fuzzy is also trying to find some semblance of agency in his adult-controlled world.  He doesn't like brushing his teeth, but he usually puts up with it when The Pit does it for him in the bath.  The other day however, he got himself all worked up about not brushing teeth, and when Daddy held him down and did it anyway, he composed himself long enough to imperiously point at the bathroom door, and say "Daddy bye-bye!"  Fortunately for The Pit's hurt feelings, this was a one-time occurrence.

4)  Although Fuzzy understands the word 'turn' and even applies it appropriately on the playground, he isn't so good at sharing at home.  When Mama or Daddy are using their phones for example, he always grabs them out of our hands, yelling "Fizz toyn!"  Somehow, it then never gets to be Mama's or Daddy's turn, ever again.  Similarly, when another person is touching the object he wants, Fizzy firmly says "Mine!" and grabs it away.  When he's feeling particularly possessive, he yells it louder and adds an 's,' thusly: "MINES!" 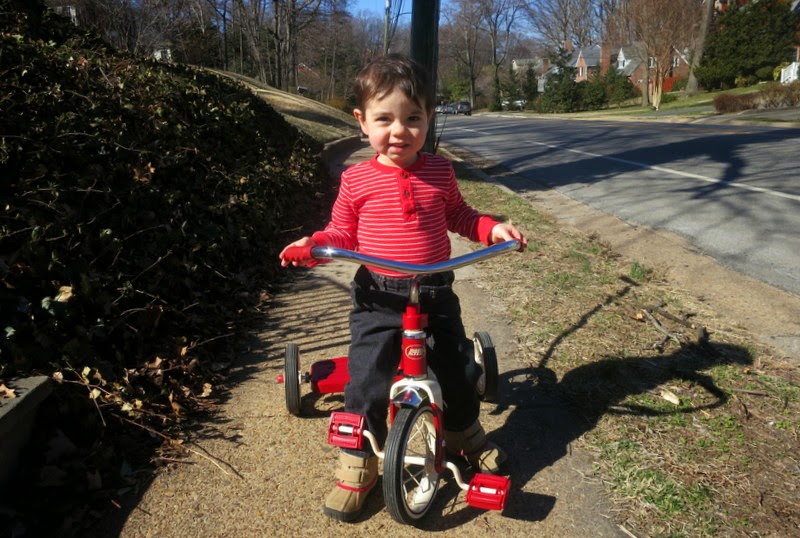 5)  Fuzzy's grandma came to spend a week with him while Maya was out of town, and one day after I got home from work, I asked him if he had a good day with grandma.  The baby considered the question for a bit, and then replied, "No...fine."  Ah, okay then, glad you realize the distinction.

6)  The Pit, while clipping Fuzzy into his carseat, somehow slipped and managed to punch himself in the ear.  At which point, quite justifiably, he let loose with a heartfelt "FUCK!"  Fuzzy looked up in worry at me, and said, "Daddy fuuuuuuckk!"  He then made a crying noise, presumably to indicate that Daddy hurt himself, and followed it up with a rather cheerful, "Mama fix!" 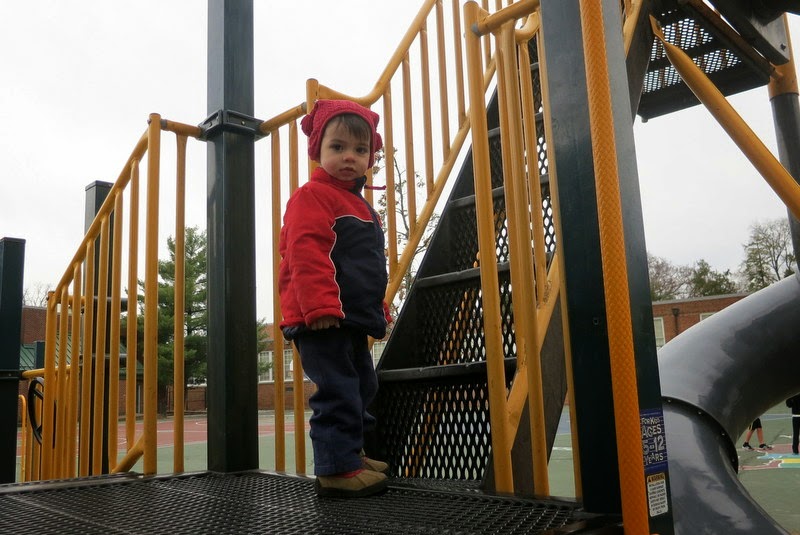 7)  When Fuzzy was a much smaller baby, and required constant rocking and singing to go to sleep, I made up a song to accompany the motion, which went like so:

Now we go through exactly three songs prior to bedtime, and Fuzzy picks out which songs he wants.  A few weeks ago, he demanded a new song, and, searching my memory in desperation, I came up with a blank.  So I started singing the baby Fuzz song.  It instantly became the new favorite, and a few days ago, I heard him softly muttering "Baby Fuzz, babbbbby Fuzz" to his bathtub ducks as he flipped them over one by one - presumably putting them to sleep, rather than drowning them as it appeared.

In other singing news, he also made up a brand new song the other day when we asked him to sing.  He stared at us with wide eyes, and proceeded to yell at top volume: "Gooon gooon GAHHHH.  Goooon goooon GAHHHHHH!"  Not sure where that came from, but it was quite amusing nonetheless.  Apparently he's gotten his pitch from Mama though.  As I'm completely tone deaf, it would have been better if he inherited this trait from his father.

8)  In the last month, our house has required constant fixing of appliances large and small - we had both the microwave and dryer break, as well as assorted more minor objects.  Being the very handy sort, The Pit has tackled these challenges himself, and now, Fuzzy loves to help Daddy 'fix' things.  For a while, we got away with handing him things like paintbrushes when he demanded to help Daddy with tools.  However, now he looks at these objects with scorn, and demands a "weal tool."  The Pit, always cautious about safety, took away the screwdriver I handed him, and replaced it with the smallest wrench in his toolset.  Now Fuzzy wanders around the house with it, putting it against various surfaces and then joyfully announcing that he's fixed them. 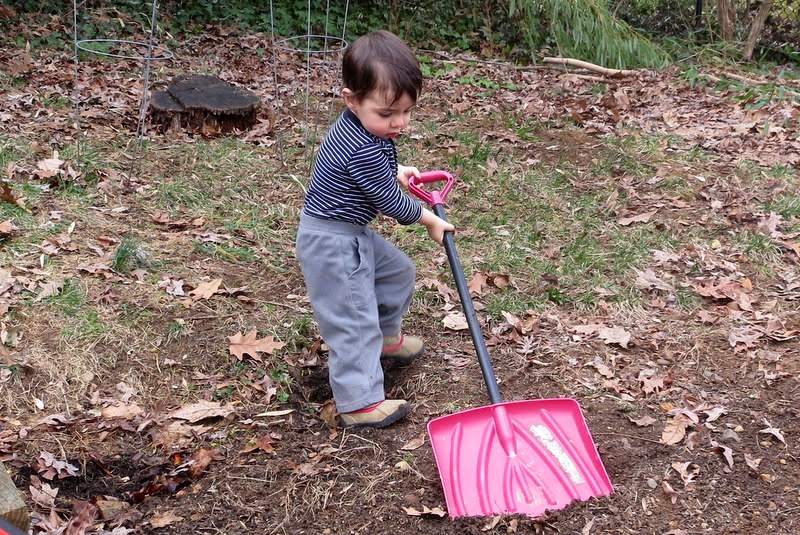 9)  Somewhere along the way, Fuzzy picked up the concept of racing.  Or 'wacing,' as he calls it.  Now, when we go down to the basement to play, he pulls out a long string, sets it up as his starting line, and then crouches down, saying "Weady, set, go!  WACE!"  Then he proceeds to race across the room, plops himself down on the mattress we have set up in one corner, and raises his arms in victory.  The fact that he has no opponent does not seem to phase him in the slightest. 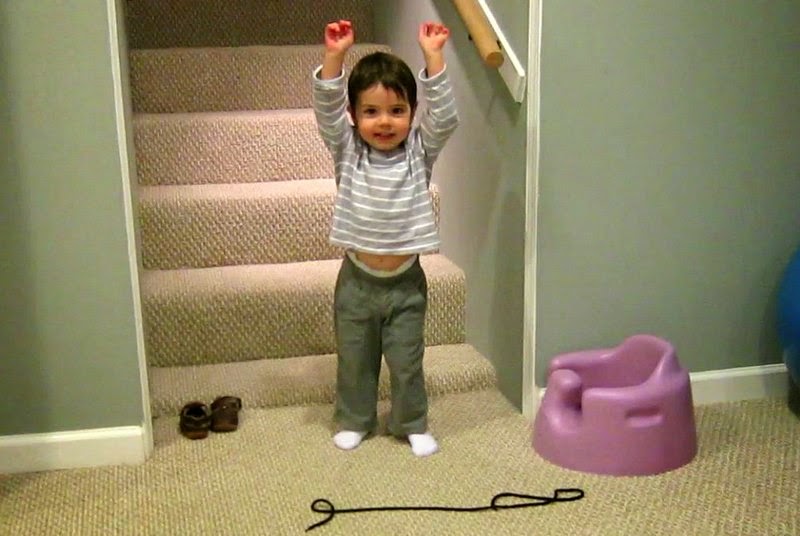 10)  As I said above, Fuzzy is beginning to exhibit more agency, now that he can communicate better.  One of his more used expressions this month has been:  "No like it, that X."  When he knows the name of the object in question, he says it.  For example, when asked if he wants to read a particular book, about half the time he will now say "No like it, that book." If he doesn't know what the thing is called, he will firmly exclaim, "No like it, that one!" while pointing to whatever it is.
Posted by Peachy at 2:02 PM No comments: