1)  So many many new words this month, I've lost count.  My favorite may be the way he's adopeted Fuzzy's pronunciation of animal - "aminal." 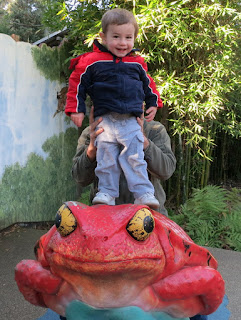 2)  Fuzzy got a remote-controlled car for Christmas.  Sprout and his similarly-aged cousin were both scared of it, but their reactions were very different.  Sprout's cousin jumped back, and ran to his mom in tears.  Sprout also jumped back, but instead of running to me, he then ran toward the car, grabbed it in both hands, and proceeded to smash it as hard as he could against the floor...over and over and over.  Toughest baby on the block, indeed.

3)  Sprout is putting words together into small sentences, but less to describe things, and more to give orders.  "No sweep dat woom!" or, "Mama eat dat!"

My favorite Sprout command was a very short sentence directed at one of his toys.  "Eat!" {shoves robot feet into an apple}. 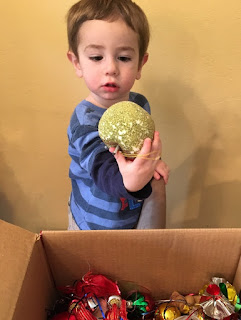 4)  My sister and brother-in-law got the boys a bouncy house for New Year's, which we keep in our garage.  Sprout is obsessed with the thing, and it is his new favorite activity.  He's picked up the language very well: he points his finger in the general direction of the garage and commands, "Bouncy hoss!" 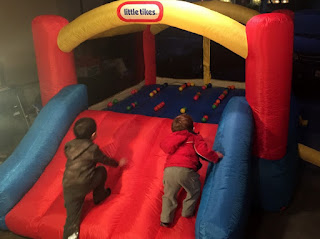 5)  Sprout has started to call himself by his actual name, although his inability to pronounce Ss hampers the situation somewhat.  He replaces the problematic sound with an H, so for purposes of this blog, he is now Hout.

He also sometimes says, "me!" - principally when I ask, "Who made this mess??'
Then he glances up at me, grins slyly, and says, "Bandeet!"  Which is Russian for 'bandit', which is exactly what he is. 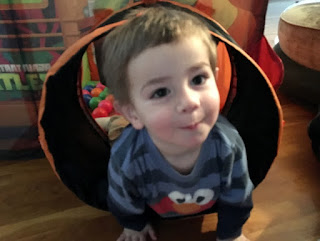 In other naming news, Hout now refers to his brother by his almost correct name, omitting only the R sound.  No longer is Fuzzy referred to as "Mine!"

6)  I present the first real conversation we ever had.  To set the scene, Sprout is picking his nose in the middle of the night while I change his diaper:
"Boooooger.  Bick boooooger!"
"You have a big booger stuck in your nose?"
"Yeah."
"Did you get it?"
"Yeah.  Eat dat."
"No, don't eat the booger, that's gross."
Indignantly, "Hout booger!" 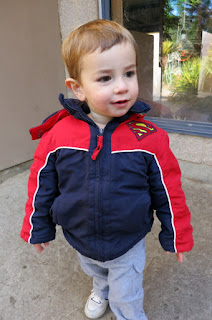 7)  When a toy or something no longer works, Sprout plaintively brings it to an adult and wails, "Woooking!"  By which, of course, he means, 'not wooking,' or in English, 'not working.'  I have to do a lot of Sprout translation around here.

8)  The kid is starting to pick up an uncomfortable amount from his brother.  When I'm washing his hair in the tub, he has taken to grabbing the washcloth and throwing its across the room, while firmly announcing, "Nuff!".  It's clearly not enough, because at that point, I have barely even touched him.  Try explaining this to Sprout though.

9)  On the plus side of copying big brother, Sprout is beginning to potty train himself.  He now says 'poop!' and wants to go to the potty...although most of the time it's not poop.  He's a clever one though, saying 'pee' wouldn't generate quite the frantic amount of activity as when he declares 'poop!'. 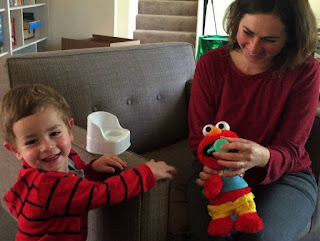 10)  In a really adorable development, Sprout has taken to screaming "YEAH!!" when we suggest he do something (and he wants to do it).  His level of enthusiasm for throwing a paper towel in the trash or heading to the grocery store is very impressive.

The kid also goes "um um um" when he doesn't know the answer to a question.  This is both charming and singularly ineffective at getting grown-ups to leave him alone.
Posted by Peachy at 12:59 AM