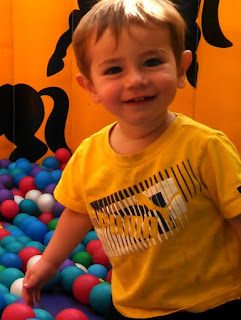 2)  Sprout wanted to be turned upside down, but didn't know how to say that.  He kept muttering "don" for down as he climbed up me.  Then I said, "But you're going up!" and he threw his head backward and said "don" until Mama figured it out.  I felt a little slow on the uptake. 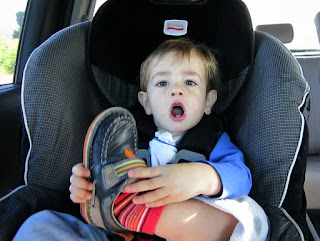 3)  We tried sleep training for the second time in Sprout's life this month.  The first time was around 11 months, resulted in two solid hours of crying, and was abandoned after one attempt.  This go-around was infinitely more painful, but sadly no more successful.

The first night the kid puked after 15 minutes, and finally succumbed about 1 hour and 45 minutes after we left his room (with all the puke clean up, this probably meant about 45 minutes of crying).

On the second night there were 15 minutes of crying, a minor throw up, and then 30 more minutes of crying before he fell asleep - followed by another 40-minute struggle in the middle of the night (though thankfully no throw-up, just what The Pit called a 'resistance poop').

The third night was slightly better, with only 30 minutes of crying in the evening, and only 5 minutes in the middle of the night .  No puke, and we breathed a sigh of relief that the worst was behind us.  Silly parents.

On the fifth day, Sprout puked twice in middle of day, and we realized we were terrible people and the baby had been coming down with a stomach bug the entire time.  Sleep training was terminated, and we have yet to resume. 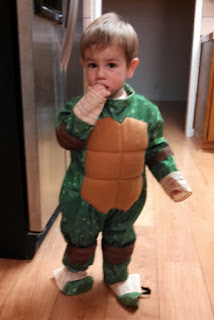 3) Sprout recently developed a fear of slides - he sits on top, says "boom," points down, and then stands up and climbs back down the stairs.  However, he also does not want other children to either approach him or go down his slide.  He will stand at the top and put his hand up in a 'stop' gesture if anybody else comes up.  If the kid keeps approaching, Sprout will firmly push him/her away. 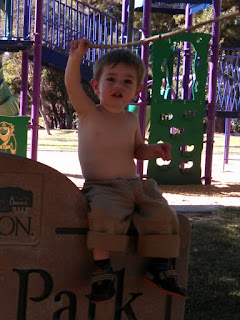 4) Sprout started calling his Elmo doll by its rightful name this month, and also began feeding Elmo his water.  This is quite sweet, especially on the day he was feeling sick and miserable.

5)  The kid is interested in counting, but in a very particular way.  He wants us to count things in books.  He will grab my finger, poke it at the picture, and say, "One!"  If I don't follow up with "two," "three," and so on, he will insistently keep poking my finger at the book and repeating "One!"  All attempts to get him to count by himself have been firmly rebuffed. 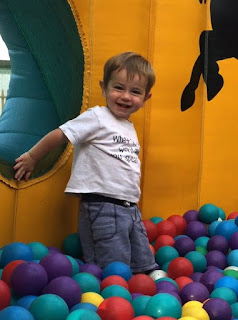 6)  A recent interaction I witnessed in the kitchen.  Sprout: "Wan diwi!" {grabs towel} "Hap! Hap Baba!"  He not only wanted to eat the kiwi, I guess he wanted to help Baba wash it.

7)  Sprout has started asking "Why?" after every interaction we have with him.  For example, I point out a dog in the street.  Sprout: "Why?"

I figured out that this isn't so much him understanding what the word "why" means, as it is the kid recognizing that if he asks "why," he will get additional details about the scene in question.  For example, after he queries "why" about the dog, I will explain that dogs like to go on walks, or that dogs go to the bathroom outside, or whatever.  It's actually quite clever of the little guy. 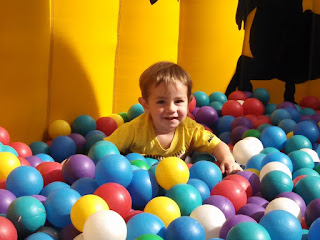