1)  Fuzz seems a little unclear on how to use certain words.  For example, he feels that saying "already" once is insufficient, and insists on appending it at both the beginning and end of each statement.  For example:

Me: It's time to brush your teeth.
Fuzzy:  I already did dat already.

Me: Do you need to go potty?
Fuzzy: No! I already went potty already! 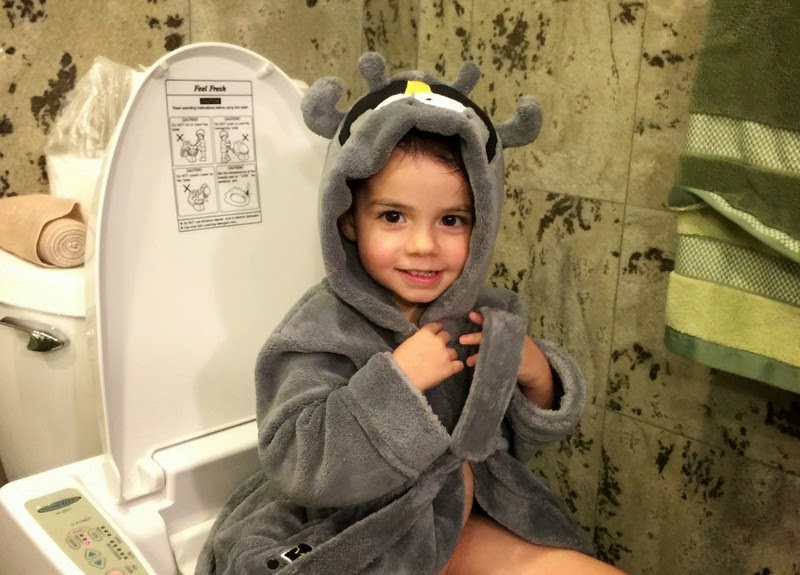 2)  Fuzzy has been pretty into hearing stories this month, ever since we regaled him with Jack and the Beanstalk, Cinderella, and Goldilocks and the Three Bears on a long car ride.  The other day, he asked to be told Jack and the Beanstalk several times in a row, and when I tried to speed up one version by omitting the giant, I was thoroughly chastised: "MAMA, you forgot da giant.  Say it again."  I tried to start at the point where the giant would normally enter the story, but he insisted I start over from the beginning.

After the last retelling, Fuzzy settled himself more comfortably on my lap, and relayed his own version of events:  "When I older, I will get beans and throw dem out da window.  And I will watch da beanstalk get tall and taller like a mountain, and den I will climb up.  Den I will go to market and buy a cow, and I will have golden beans." 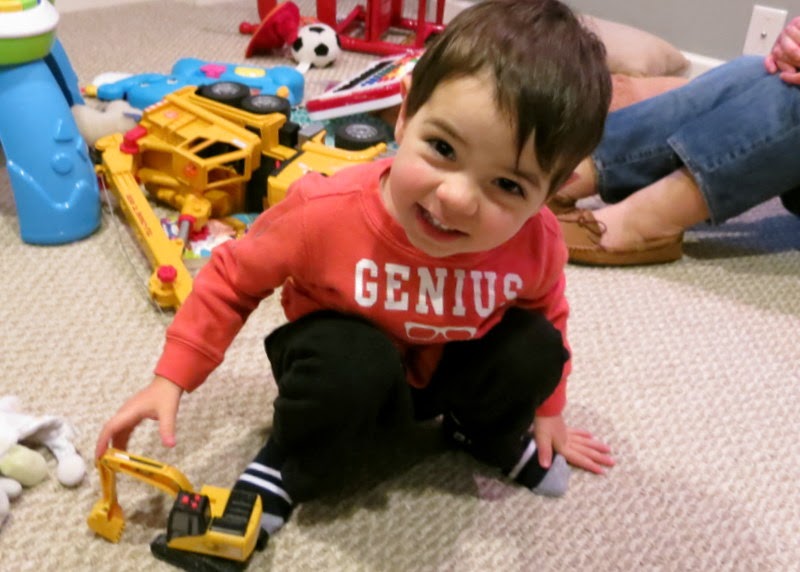 3)  Fuzzy has also figured out the general format for a story, and, when asked to create an original version, will center his plots on whatever actions he's taken that day.  Here are a few recent examples when I asked him to tell me a story:

"Once der was a little boy named Fizz, he went to a birthday party, and den he came home and saw his daddy cookin' dinner."

"Once der was a little boy.  He went to the neighbors and gave 'em some boonana bread."

Each of these stories is followed by preening and the clear expectation that he will praised for his excellent story-telling skills. 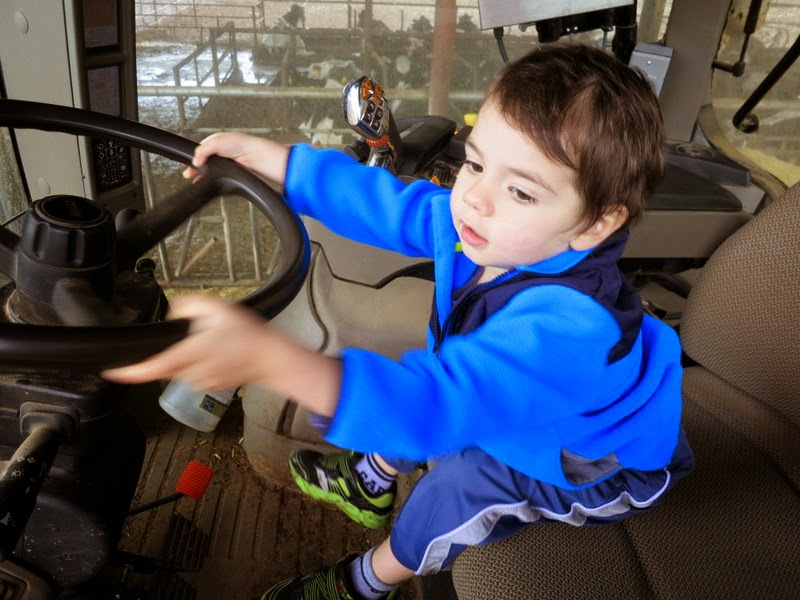 4)  When he wants something, the kid wants it, and he isn't above using a command voice to get it.  Generally speaking, his tantrums start like this:

He resembles nothing so much as a tiny Napoleon, clearly expecting everyone to fall in line and obey orders. 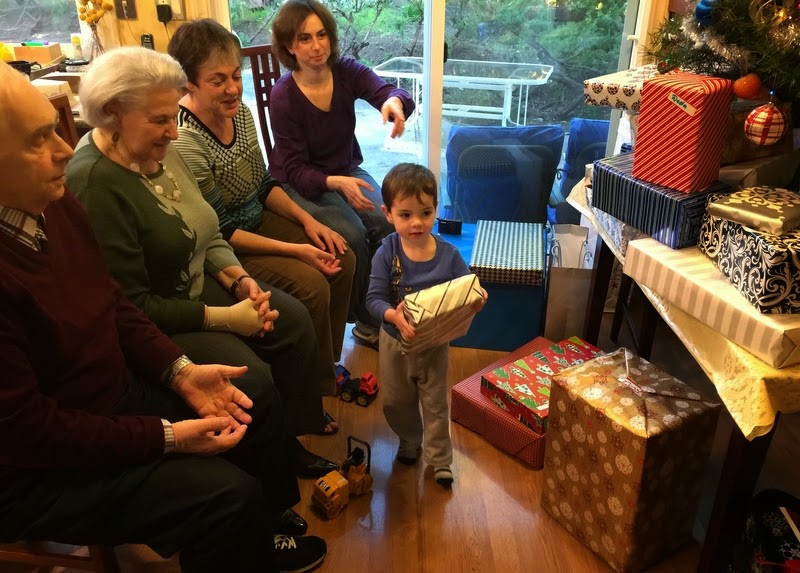 5)  The child has the rudiments of swearing down, but is a little confused about the details.  Upon breaking his crane the other morning, I heard him say, firmly but quietly under his breath, "Fook it me."  When he tried and couldn't open the bathroom room, he murmured "Dammit me."

6)  The concept of time is still quite blurry for Fuzzy, but he's taken to describing all events from the past as happening yesterday, or, as he puts it, 'yesarday.' 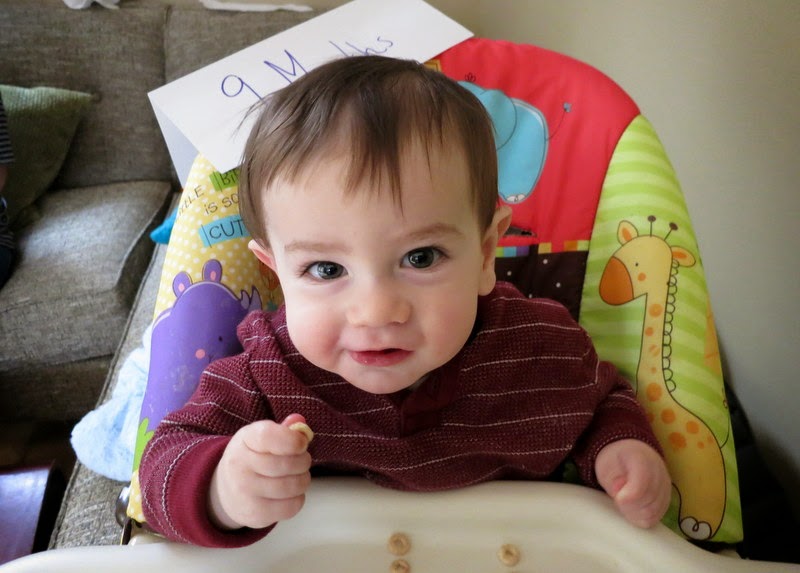 1) Over the last month Sprout's balance has really improved, and he can now stand by himself for almost 10 seconds, and walks relatively well if held by the hands or using his walker. 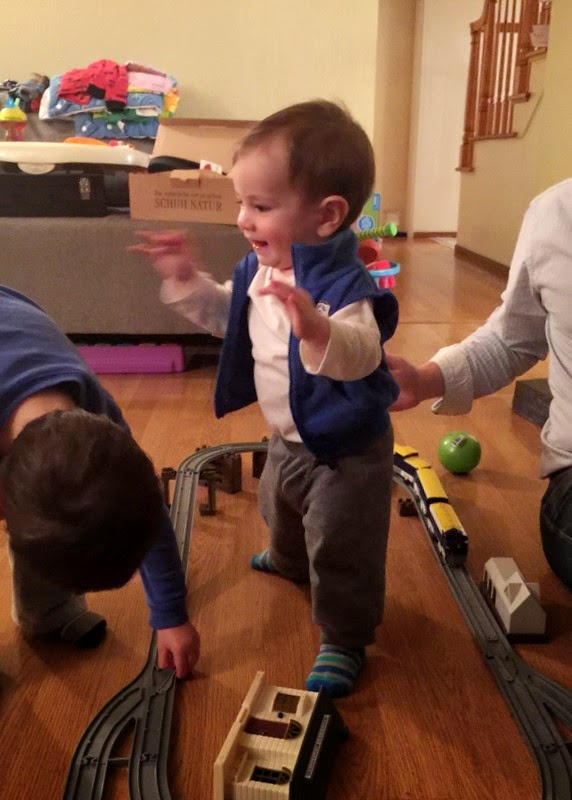 2)  My favorite of Sprout's activities is probably his dancing.  If he hears music, he gets on all fours and sways backward and forward gently, while giving everyone around delighted grins. 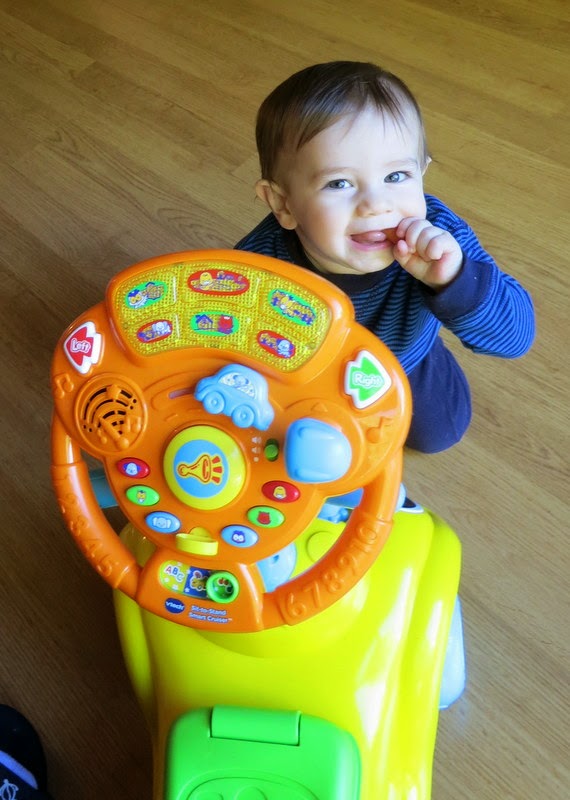 3)  Based on Fuzzy's interests, we have a preponderance of four-wheeled toys: cars, trucks, tractors, more trucks, etc.  Sprout has been relatively disinterested in this bounty of vehicles until recently, when he found one oversize car at his grandma's house over the holidays, and played with is as nature intended.  This caused great consternation on Fuzzy's part, as it was the first time that Sprout really wanted a toy meant for Fuzzy. 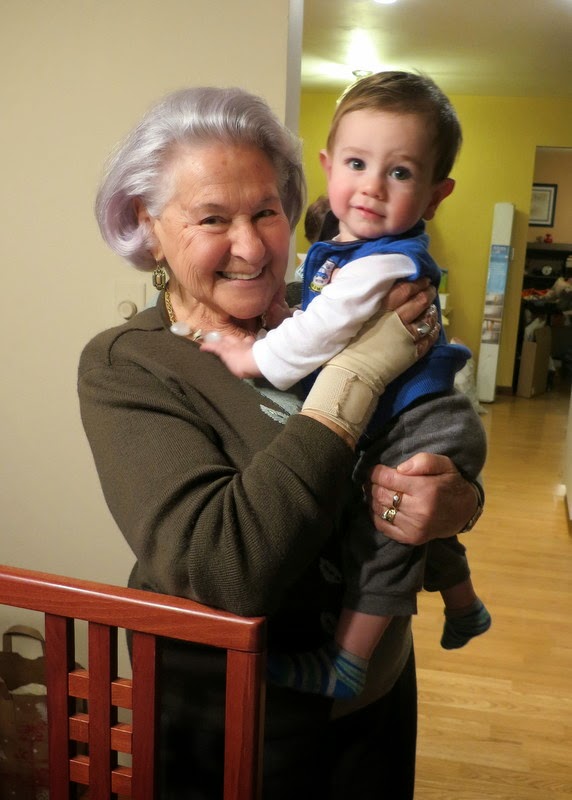 4)  In the bath the other day, Sprout grabbed the washcloth away from me, and, after first stuffing it in his mouth and sucking it relatively dry, he reached over and slapped it carefully against my face, clearly trying to reciprocate my attention. 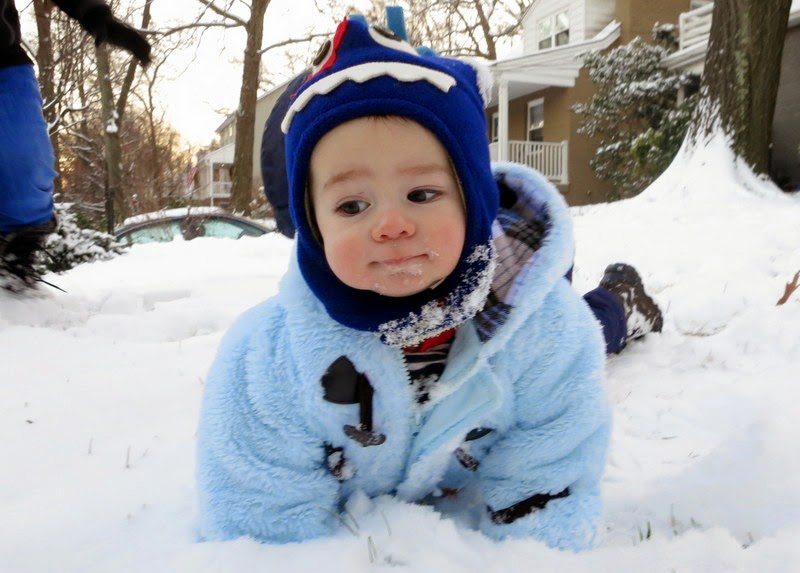 5)  Much like his brother at this age, Sprout will now look up as you desperately yell his name or scream the word "no."  He does not, alas, in any way respond to the intent of the screaming, and after carefully glancing back at you, will continue with whatever dangerous activity he was previously engaged in. 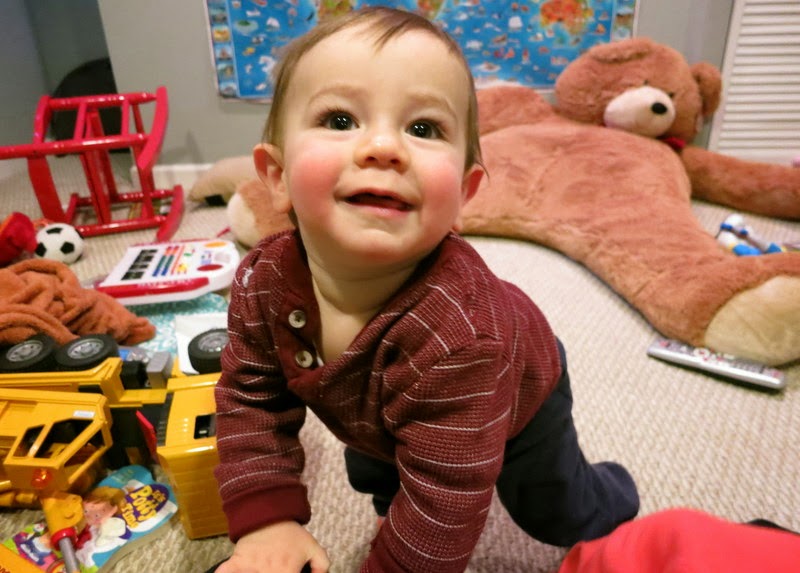 Posted by Peachy at 2:29 PM No comments: