My little guy turned a month old on Saturday, and once again, I'd like to record some facts for posterity.

1)  The Pit is undoubtedly Fuzzy's favorite person.  The kid calms down instantly whenever his dad picks him up, looks up at him in adoration when set on his lap, and consistently smiles and laughs in his presence.  In comparison, mom is just some waitress bringing the milk. 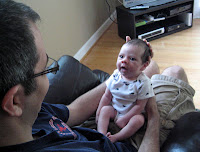 2)  Fuzzy has also looked like The Pit from day one, but that resemblance has been strengthened even more recently as he began to go bald in exactly the same pattern as his father.  Unfortunately, Fuzzy's hair loss is accelerating quickly, as my mom and I discovered when we wet his head during a bath.

I fear that soon, my adorable baby will begin to resemble a tiny tonsured monk - a fashion statement I'm not anticipating eagerly.

3)  Although his looks come straight from Daddy, it's clear that Fuzzy inherited at least some things from me. Specifically, the baby is already a picky eater, absolutely refusing to suck on anything that isn't warm human flesh.  My mom and I have been trying to get him to drink from a bottle or suck on a pacifier, and from the reaction, you would think we were trying to poison him.  He jerks his head away, makes a face, and flails his arms about wildly. 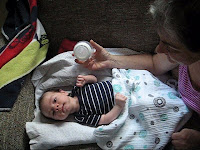 If we persist in our folly, there is screaming.

4)  In the last week or so, Fuzz has started to not only smile and laugh (albeit infrequently - we have one serious kid on our hands), but also to babble a bit during those happy intervals.  In between his near constant hiccups, he makes little birdlike cooing noises, irresistibly cute as he looks up at us.


5)  Fuzzy was born with a very interesting set of ears, and a little tiny cowlick in the hair on his upper arms, which can both be see here in his first week:

Sadly, the cowlick has disappeared along with the hair, and his ears are starting to assume a more normal and human folding pattern, perhaps from his habit of grabbing at them when he's trying to pass gas:

6)  However, to compensate for the loss of those two features, Fuzzy is growing by leaps and bounds.  He stopped fitting into his newborn onsesies after 3 weeks, and now wears clothes meant for three, and occasionally even six, month olds.  Additionally, he has developed a killer set of arm and leg muscles, with more definition than his mother ever enjoyed.  His chunky little thighs make him look even more froglike than before.  His crowning achievement to date though is definitely the development of freakishly giant head - lifting it is a real drag: 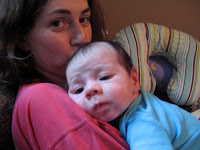 7)  The kid sleeps best tightly swaddled, so I suppose it's not surprising that upon waking, he likes to stretch his arms and legs a bit.  What is surprising is the volume of farts that accompanies the stretching, and the faces he makes in the process.  I'd like to title the following composition "Stretchies is Serious Bizness"

Posted by Peachy at 7:26 PM No comments:

Recently, The Pit and I took Fuzzy and went to introduce ourselves to our newest neighbors.  We chatted for a bit, and then their 3ish year old daughter came over and looked at Fuzzy.

We were all a bit lost for words there - I mean, I'd like to think that my son is a genius - just look at him reading already.  Granted, it's a book with a tail, but nevertheless: 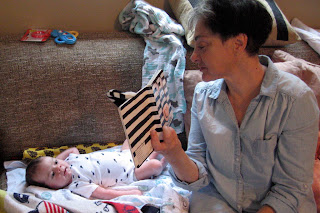 However, judging from another recent photo, my baby has rather more...sinister...plans for the world: 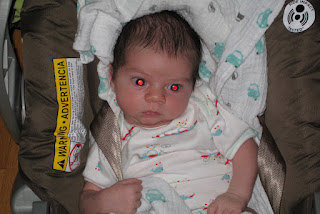 Posted by Peachy at 8:14 PM No comments:

This Wednesday marked Fuzzy's third week of life, and I decided that I was finally ready to do more than walk between the couch and the bed, serving as a human buffet.  So yesterday, my mother and I took a much-needed trip to the mall to purchase some clothes befitting my new... generous...dimensions in the bosom region.  Since Fuzzy still eats every twoish hours, it was clear he needed to accompany us, as no mall trip could possibly conclude in less time than that.

Like most gentlemen, the baby behaved relatively well at the beginning of the shopping trip, sleeping quietly in his stroller.  My mother and I foolishly wasted this time taking pictures: 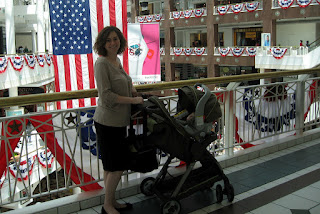 Shortly after this picture was taken, Fuzzy started fussing, requiring me to feed him in the middle of the Macy's lingerie department.  We found a quiet corner by the nursing bras, figuring it was as safe a place as any to breastfeed in public.  Wouldn't you know it, as soon as the baby latched, two separate men appeared out of nowhere, intently picking through the women's nightgowns nearby.  However, neither one of them paid me much attention, and after some debate, my mom and I concluded that their focus could only come from transsexuals shopping for themselves.

After the feeding Fuzzy quieted down again, and even took some interest in our endeavor: 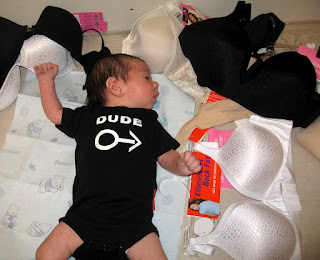 Sadly, his patience with shopping wore thin quickly after the novelty of the bras, and by the end of our trip, he assumed the universal (straight) male expression seen after a few hours at the mall: 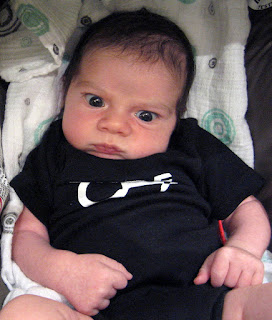 PS: Does anybody understand Fuzzy's shirt?  It was a gift from my boss, and The Pit and I are both puzzled by it.  "Dude" we get, but why is the male symbol pointing horizontally instead of at the usual angle?  Enlighten us, oh well-slept masses.

Fuzzy is two weeks old, and before I forget these details in a haze of sleep-deprived nursing, I'd like to note some of his idiosyncrasies for posterity.

1) Since he was born, Fuzz has had the most exaggerated startle reflex I've ever seen.  Whenever a loud noise disturbs him, his eyes open wide in alarm, his hands bunch into fists, and he throws both arms in the air like some sort of Jewish grandmother stereotype.  I haven't quite managed to capture this on camera, but the following is a good approximation: 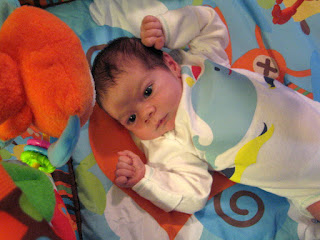 2) When he's done eating, the kid is done.  No amount of wheedling, distraction, or nipple-shoving-in-face will convince him to suck one drop more.  Should said nipple be placed anywhere near him, his mouth closes firmly, and he assumes a look of such utter disgust, you would think he'd just been offered ground dog meat, and not the milk he had energetically been drinking two minutes ago.

3) Often, as he's feeding, Fuzzy will experience...sensations...at the other business end of things.  When this happens, he will stop sucking, assume a look of concentration, and repeatedly kick one leg in the air over and over.  The overall effect is very puppy-like.  Fuzz also channels the animal kingdom in the sound department: he will make kitten-like mewls and piggy snorts while nursing, and grunt and snuffle quite loudly as he grasps at me in displeasure during gassy intervals.

4) When he's mildly upset by something, before it graduates to the wailing stage, Fuzz has a sad face.  A face so sad, to look upon it is to go "Awww."  Sometimes, something clearly upsets him in his dreams, and he briefly makes this face when sleeping. 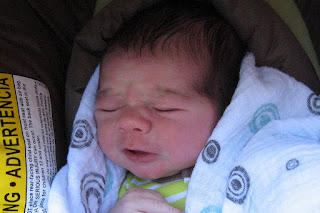 5) Now that he's two weeks old, Fuzz has been experimenting with two new facial expressions.  One is the pursing of lips you see in the disgusted picture above, and the other is a what we've decided is a smile.  I know, I know, babies aren't really smiling at this age.  But it still makes me smile back. 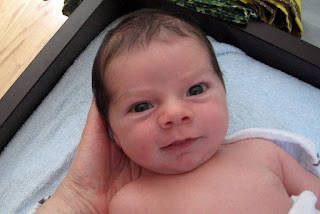 6) The two week birthday has also marked the beginning of a few other developmental milestones: Fuzzy is much better at focusing on objects, and will, should something catch his interest, follow said object when it is moved across his field of vision.  My mother is also convinced he's well on his way to rolling over unaided, because in a few instances he's flailed about and almost moved from his back to his side.  I'm less convinced, because the times I've witnessed this, it's been mid-tantrum, and I don't think rolling over is at all what he was intending.  My mom argues intention has nothing to do with it, and that the eye tracking and (almost) independent movement indicate Fuzzy's advanced intelligence.  I would agree, if his independent movement did not also involve repeatedly poking himself in the eye as he attempted to move his hands to his mouth. 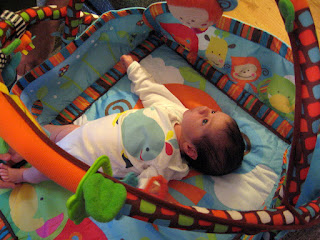 People keep asking me how I'm dealing with the lack of sleep necessitated by a newborn.  Truthfully, except when I am actually prying myself out of deep sleep at 3 in the morning, I feel okay.  However, there are clearly subtle effects, detectable upon close observation.  Let me tell you a little story to illustrate.

One of The Pit's coworkers stopped by for a visit the other day, and brought a lovely bouquet of flowers.  I carefully trimmed the stems, added the plant food, and put the flowers in the vase.  The next day however, the flowers looked a little...droopy.

"Weird," I said to myself, and continued about my day, moving from bed to couch and back again, baby draped all over me.  The next day, there was definite wilting in the vase - and yet it still didn't hit me that I might have forgotten a critical element in the equation.

The following day my mom came to stay with us, and delicately asked me who had placed the flowers in the vase.  I told her it was me, and she carefully didn't make any follow-up observations.  Later in the day, I noticed that she had combined the flowers with another, older bouquet, and that things were looking alive and cheery once again.

"Those look much better," I pointed out.

"Well, water does tend to help," she replied.

So err, yes, apparently the lack of sleep is affecting me, although thankfully I am merely starving well-intentioned gifts, and not Fuzzy.  His chins are in no danger, although he remains ever vigilant. 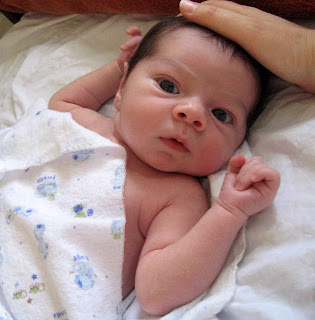 I should note that after three days with us, my mom is also starting to feel the effects of Fuzzy's round the clock care.  This afternoon, The Pit went to drop some scraps in the compost pile.  When he returned, he asked me why my mother felt the need to compost a wooden spoon.  I was at a loss, and when the question was posed to her, she couldn't answer either, having no memory of this horticultural experimentation.
Posted by Peachy at 5:48 PM 3 comments: