1)  This month brought a new adventure for Fuzzy.  He spent two weeks in California alternating between grandmothers, with Mama and Daddy back in Virginia.  Although he was generally well-behaved, and had awesome enriching experiences (see various new settings in pictures below), he apparently clung to my mother like a barnacle, to the point that she couldn't get a decent shower the entire time he was with her.  A couple of times a day, he also turned to her solemnly, and said, "Mama is goin' to come soon and take me hooooooome." 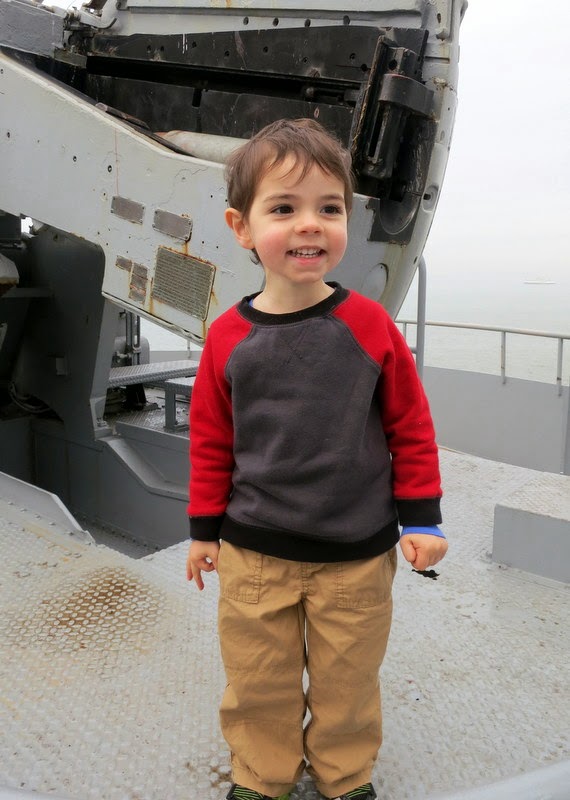 2)  Fuzzy's comfort elephants have been renamed again - the favorite one covered in dots is still Dot Baby, but the identical one with guitars on its shirt is now Daddy Baby.  Reflecting a recent trend where The Pitt has to come comfort Fuzzy in the middle of the night, Dot Baby does not like to sleep without Daddy Baby nearby.  However, only Daddy Baby requires a blanket covering at night, as Dot Baby is generally clenched tightly in Fuzzy's fist.

3)  Fuzzy is convinced he knows how to sing the ABC song.  However, his version generally goes like this: "ABCDEFGHIJKL...QRSTUVWXY and Z.  Now I know my ABC's, next time won't you sing wit me." 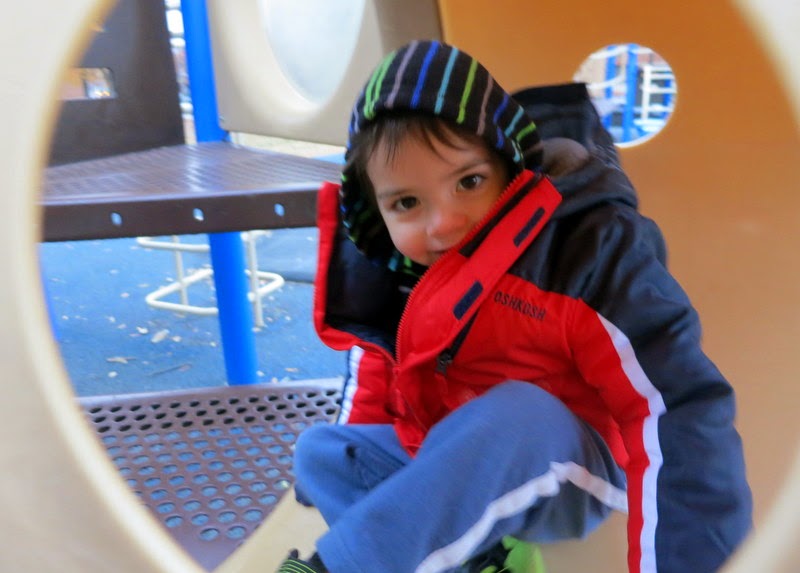 4)  The kid's language skills are really progressing, and he's beginning to understand the rudiments of turning nouns into words.  For example, he other day he was telling us about an elevator: "Da elevator...{pause for thought and word selection}...elves up, the elevator elves down."  Eventually, and completely on his own accord, he changed 'elves' to 'elevates,' and then impressed everyone at a Christmas party, when he said a car that went flying was 'elevating.'  He meant that it was moving like an elevator, of course, but the other guests all decided his vocabulary was genius-level. 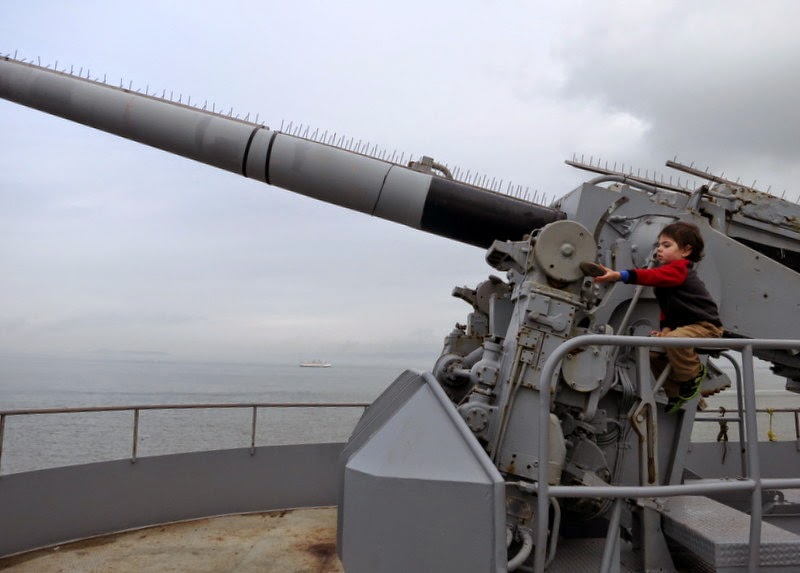 5)  I'm sad to say I was the only witness to this incident, because it may be my favorite moment of Fuzzy's ever.  He was pretending to be an airplane, running around the room with his arms out like wings while narrating events for my benefit: 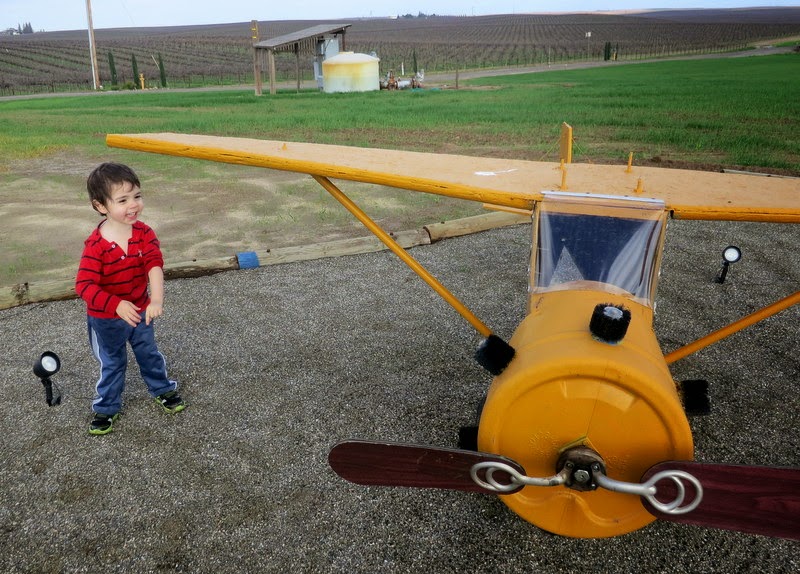 "Mama, Mama, I'm a biplane!  Whoooosh...I flyin!"  Then he paused, stopped, and announced, "Mama, my gears are broken."   I told him to fix them, thinking he was going to ask me to be the mechanic.  Instead, he said 'okay,' pulled down his pants, and began adjusting his..err...well, let's say dangly bits.  After a few seconds, he looked up at me, grinned happily, and exclaimed, "My gears are all fixed now!"  Whooshhhhh!"

In retrospect, I'm glad he didn't ask me to be the mechanic.
Posted by Peachy at 3:00 PM No comments: 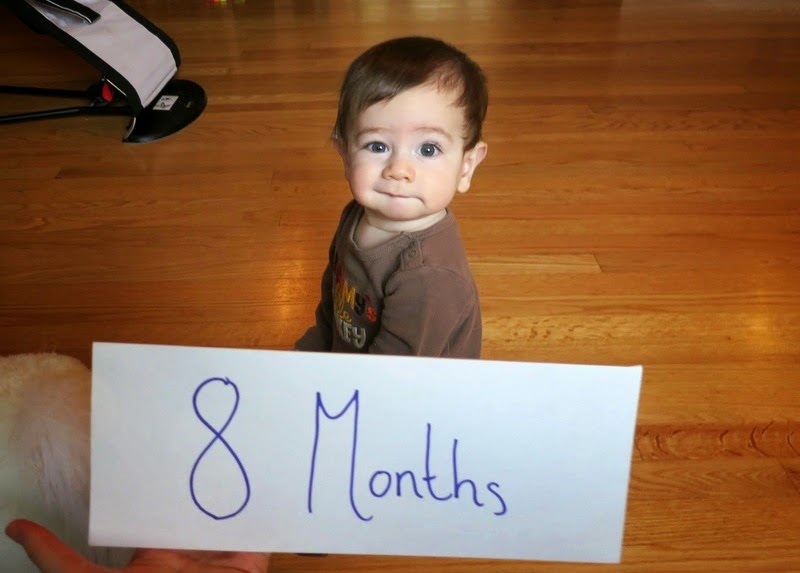 1)  Sprout continued his domination of gross motor development this month, learning to pull himself to a standing position on virtually any surface, crawling up the stairs, and *finally* mastering sitting.  He can now even stand for approximately one second completely unsupported. 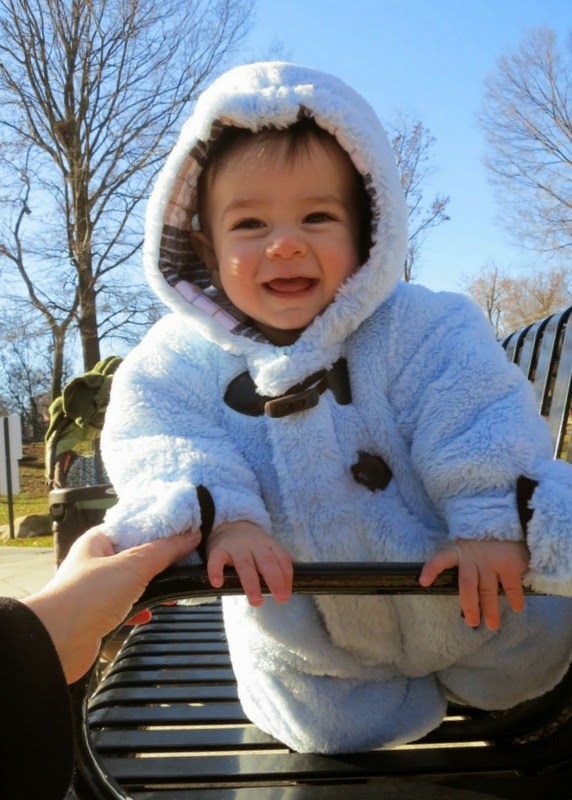 2)  The baby is putting all his motor skills to good use...when Fuzzy starts getting rough, Sprout now eyes him askance, starts whimpering, and then quickly crawls to me to get away from his brother. 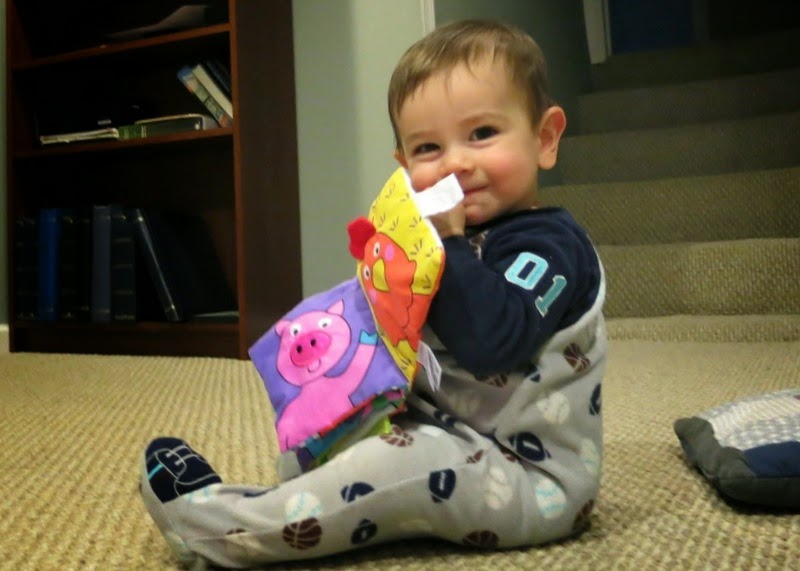 3)  In a surprising development, Sprout's eyes appear to be changing color.  When his eyes stayed blue all through his 6th month, I figured that was just going to be his final color, and was pleased that one child had inherited my coloring.  But in the last month, he's lost most of the blue and gained a little green, leaving his eyes a sort of blueish, greenish, grayish color not easily described to others.  We'll just have to wait and see if they stay this way, or shift all the way to brown eventually, as The Pitt insists will happen. 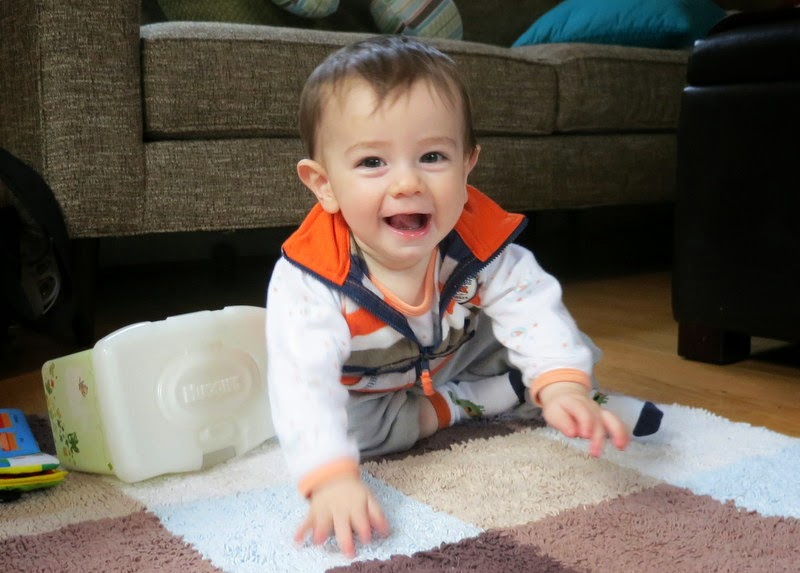 4)  About a week ago, Sprout started to really babble.  His first consonant is definitely 'b' - he says either "blah blah blah" or "ba ba ba" or "bum bum bum" depending on his mood.  It may be wishful thinking, but I believe I've also heard a "ma ma ma" noise, although this is far less frequent and I can't get him to repeat it ever. 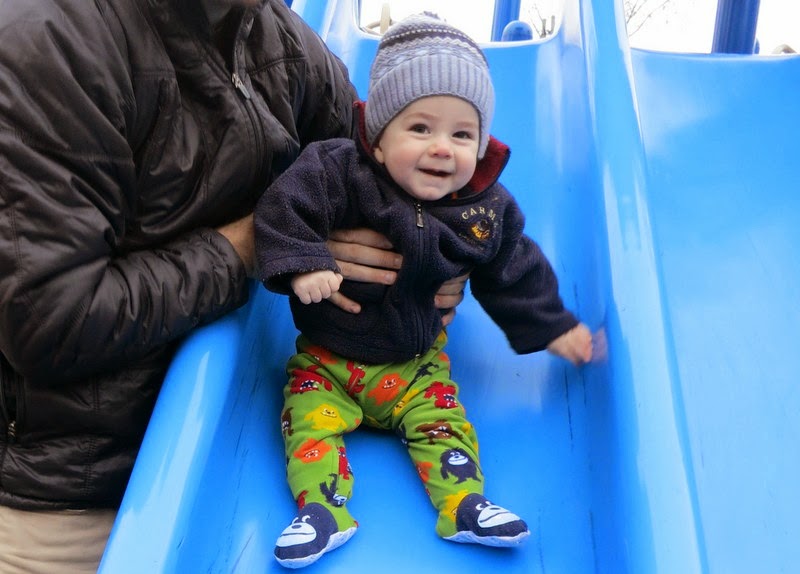 5)  It's not a new development, but I'm not sure I've written about Sprout's love of smooches before.  He loves it when we hold him and kiss him, especially when the kisses are accompanied by loud smooching noises.  He will always react with a smile when that happens, and if he's in an especially agreeable mood, smooches can sometimes elicit peels of laughter. 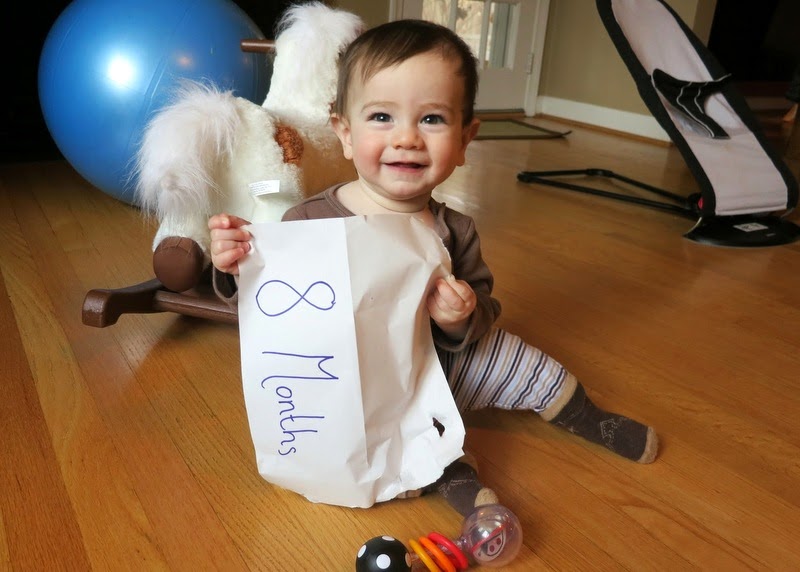 Posted by Peachy at 3:21 PM No comments: